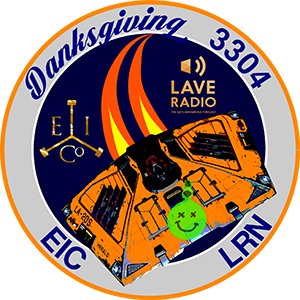 "Well, it's just a bit, you know -- dull at times in Colonia", my partner in crime said, putting his feet up on the console. "I mean there's Jaques Bar, but they're all out of the good stuff, and then there's the Customs people who ... well, want to spoil the party"

And so the idea was born. The citizens of Colonia have been working hard to build their new home, and now it's time they got a reward, regardless of what Customs might like to think. So with the aid of The East India Company and publicity via Lave Radio, an expedition was put together with the following goals:

This expedition is open to everyone. You don't have to bring cargo if you can't carry it - the whales will be bringing in the bulk of it, and we're glad to have any explorers, travellers, photographers, or anyone else. After all, the more ships, the more we can distract Jaques Customs on arrival.

NOTES: Loading party in Kappa Fornacis and Lave will be held in OPEN PLAY.