Expeditions > Rook Platoon Explores the Land Down Under 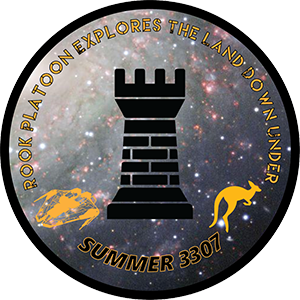 The Rook Platoon Explores the Land Down Under

As a goodbye to the Horizons galaxy and a hello to Odyssey the Rook Platoon invites you to explore a land not often traveled. Join us as we travel to the Australis Ferris Wheel and the southeastern corner of the galaxy along a three week journey. This trip will support both Horizons and Odyssey players alike and will involve some studies of exobiology, for those who can partake in Odyssey, as well as some opportunities to see some frequently missed Horizons based lifeforms lost in the deep reaches of space. More details will come over the next week as we lead up to our launch window. Come join us in our official expedition discord linked above, sign up on the official roster used for statistical data, and have a blast with new people! If you're interested in joining The Rook Platoon there will be members with whom you can speak, but all are welcome from any squadron or player faction. The trip can take place in a private group, we have one available, or in open at your own discretion.

Last video has been released, thank you for enjoying the expedition

EXPEDITION HAS LAUNCHED Carriers are gathering to the first point Wregoi DM-L b8-0 and stay there for the night. @Chou#0001 is under way for this destination in the Extended Warranty. The [R0OK] Copium finder (Richard and @Niccoll Dyson#5143 ) will launch in 2 hours from now ( (21:00 UTC) and the flagship, the [R0Ok] Bonaventure from @Burrito Riot#9092 will launch later tonight around 0:00-1:00 UTC. (Followed by an NA mass launch if we get enough people from #announcements ) Today we will do 8 jumps covering a total of 3975 LY. Let us know if you want to hop to these carriers on route. Thank you for trusting in us with your presence.

With the first phase of the trip complete, having visited the Australis Ferris Wheel, the fleet is now headed onward to Dreamer Blush and crossing the void. During this phase of the trip it may be difficult to catch and join a carrier if you haven't already boarded as the void can be quite empty with very few stars to cross. If you would like to attempt to join up, we do have some void crossing guides, or you could simply catch the fleet on the other side. Each day the carriers jump two hours at a time and then stop for a day to allow for some exploring and shenanigans. If you wish to join up mid journey with us we wish you the best of luck and can't wait to see you out here. If you're already onboard, remember to reboard your carrier before the scheduled departure each morning so as to ensure you don't get stuck in the void. If you choose to be a rebel and fly alongside the carriers, you will need a rather beefy jump range. A solid estimate is around 70 LY+ minimum with jumponium reserves. See you all at the next major waypoint!

At the request of a few folks who got behind schedule a bit the timer has been extended until the 21st of August to allow folks who want to get full credit on EDSM time to get it completed.