This system was visited for the first time on EDSM by SpaceLok.

It was named by the Galactic Mapping Project with the name of: Clown Nebula

Although resembling the Candy Floss Nebula in appearance, the Clown Nebula is more than twice as high and wide in each dimension. It lies exactly in the Galactic Plane at one end of The Festival Grounds and several other nebulae are visible about 1,500 LYs away.

This point of interest description was fleshed out by a CCN Exploration Wing survey (August 3302).

The Clown Nebula resembles the colorful wigs worn by its namesake. Once inside, subtle hues of maroon, pink, lavender and greys swirl and engulf the planets within the system. Located at one end of the Festival Grounds, it provides a great vantage point to spot the other six nebula within the Grounds. 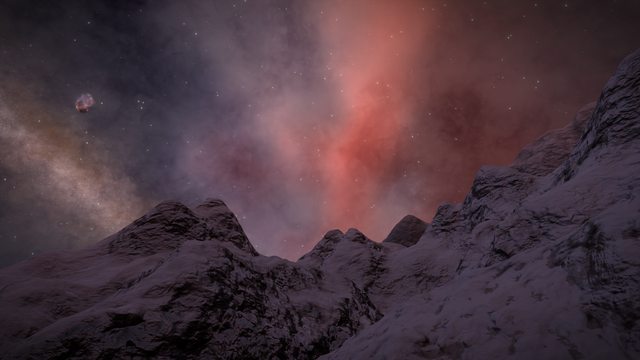 In stark contrast to the vibrant and colorful scenery, the single planet and moons of the two gas giants are either composed of metal or ice. Moon 3 of Planet 3, is striking with an extensive series of deep, long canyons which snake about its surface.