This system was visited for the first time on EDSM by Allitnil.

723 ships passed through Rendezvous Point space, including 1 ship in the last 7 days.

1 ship passed through Rendezvous Point space in the last 24 hours.

Rendezvous Point was jointly discovered by CMDRs (Erimus) Kamzel and R4nger0 on February 16th 3301. It is the point at which these two early deep space explorers met and marked the first ever deep space encounter beyond the galactic core regions during a time when seldom few had reached those remote regions of the galaxy.

CMDR Kamzel was returning from the Outer Galactic Rim, CMDR R4nger0 was attempting to cross the galaxy in a Sidewinder.

The two intrepid pioneers crossed paths in the Eactainds Sector and met up in a star system that later became known as "Rendezvous Point". The occasion also marked the first extreme range distant encounter ever recorded (43,000 LYs from Sol).

[Note: The discoverers of this system (Kamzel & R4nger0) are not recognised by EDSM as the first to visit this system, despite being so. This is because other explorers (having seen the GalNet article about the famous rendezvous), headed-out to visit the system themselves and returned home with first discovery data and EDSM logs before R4nger0's Sidewinder was able to]. 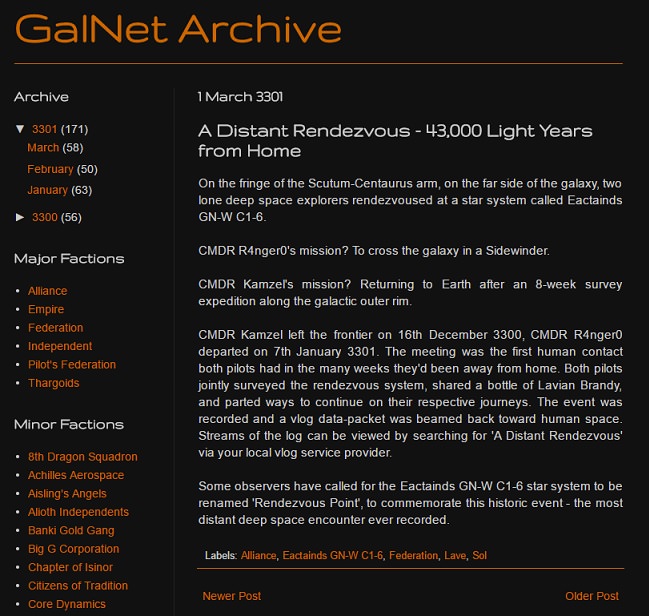