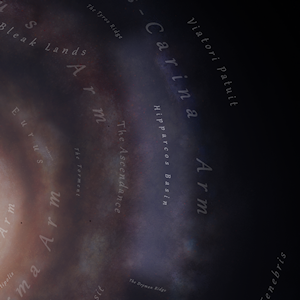 A rarely travelled portion of the inter-arm void between the Scutum-Centaurus and Sagittarius-Carina arm. The Hipparcos Basin is enclosed by the Tyros Ridge to the north and the Dryman Ridge to the south. Little is known of what may be found there.

The Basin was named in honor of the 20th century Hipparcos satelite, whose data lead to great progress in mapping the position and motion of many stars. The result of this work can be seen even today in the 34th century, in the stars bearing the HIP prefix - an indication that these stars where first mapped by Hipparcos. The Hipparcos satelite was in turn named in honor of the ancient astronomer and mathematician Hipparchus of Nicea.