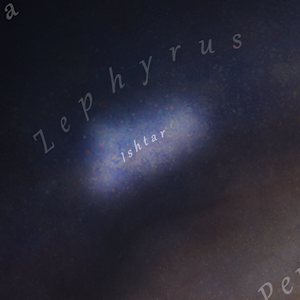 Ishtar is located within the larger Zephyrus region of the Norma-Outer Arm.

Observed from afar the region stands out due to its unique blue luminescence. The blue light emitted is too faint to be perceivable once you approach or enter the region itself.

When explorers from the Mercury 7 expedition passed through the region, they found there to be a slightly increased pressence of oxygen in the interstellar medium within Ishtar (and also to a lesser degree within the wider Zephyrus region). The highly dispersed oxygen emits blueish light when agitated by solar winds, thus causing the unusual phenomenon.

Why there would be an increased pressence of oxygen within the region is cause to some speculation. The most prominent hypothesis is that this is due to a collision between the Sagittarius Stellar Stream and the Milky Way galaxy in the past.

As the Sagittarius Stream pierced the galactic disc in the Ishtar region, the sudden overabundance of hydrogen gas, as well as the gravitational disturbances, resulted in an extraordinary starburst. The stars formed at this event probably had more than 150 solar masses each and exploded after only one to five million years - thus being both extremely heavy and very shortlived. These massive stars produced oxygen in their interior as part of their evolution, and this oxygen was later dispersed across the region as the stars (due to their size) exploded in pair-instability supernovae - thus leaving no black holes or neutron stars behind.

In a very real sense, the blue light of Ishtar is caused by the ghosts of these massive giants from the past - a faint glow brought forth by the solar wind of their younger and smaller descendants.