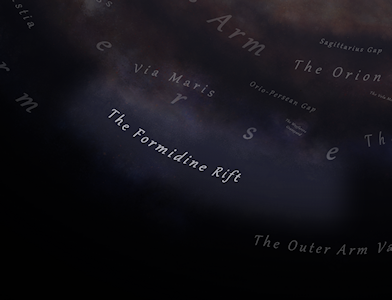 Point Decision - A place of historical significance as the outermost point an early pioneer (CMDR Katejina) could reach on the way out to the near galactic rim; and as such, the point where a decision was made to go either spinward or wydershins on that attempt to circumnavigate the galaxy.

The Poseidal Wall - In the eastern parts of the Rift, approximately 10,000 LY from Sol, there is situated an area named the Poseidal Wall. This is a subregion within the Rift so devoid of stars that continuing to cross at that point becomes increasingly difficult in starships whose range does not exceed at least 30 LYs.

New Vista - One of a tidally locked twin system, both twins being ringed metallic worlds in close proximity to each other, and also close to their parent star. The proximity of the two worlds with their ring systems illuminated by the nearby star could make them both possible planetary surface tourism candidates since neither have an atmosphere.

In early 3301 the Formidine Rift became a hotbed of explorer activity when speculation arose that it could be the origin of the Unidentified Artefacts (UA's). The first tentative steps to investigate the Rift began in February 3301 when explorers following the mystery began heading out to the region. By March of 3301 more organised excursions had been set up and efforts to map the region began. Some of the first maps to be created during one such expedition - the Daedalus mission - helped form the foundation of the Galactic Mapping Project and promote it to a wider audience beyond the exploration community.

By the summer of 3301 it became accepted that there were no known links between the UA's and the Formidine Rift, and both mysteries began to diverge. The Rift mystery encompassed the travels of Sentator Kahina Loren - aka Salomé. A persistent rumour would know that Salomé was searching for something hidden within the Formidine Rift - and the words of those in the know where to "take a line from Reorte to Riedquat... and keep going". This re-sparked interest in the Rift mystery, and many pilots from all parts of human space embarked on a quest to uncover the truths that lay out there.

The term "Rifter" was gradually adopted by explorers who banded together to jointly survey the Rift and who chose to pursue the Rift mystery over others that were prominent at the time, and more organised groups emerged - most notably The Children of Raxxla, a group made up of dedicated Rifters who had followed the mystery from its earliest days. Indeed, CoR were adopted by Salomé herself and she often tasked CoR and the Rifters to search the region for clues.

As interest in the Formidine Rift developed, initiatives to set up listening posts and patrol zones along the regions borders were instigated by Salomé, and by August of 3302 a major Formidine Rift Expedition got underway that concentrated its efforts on a specific sector within the Formidine Rift - the EAFOTS sector. This particular sector had been decoded as the target location after a seemingly unrelated GalNet article appeared in the summer of 3302 hinting that the sector was a place of 'interest'. Shortly afterwards the Empire detained CMDR Salomé on an accusation of attempted assassination of Admiral Patreus. Many suspected that these allegations were without foundation and were simply an underhand tactic employed by the powers to silence Salomé and put a halt to efforts to uncover the secrets of the Rift.

In October 3303 it became clear that the Federation had also taken a great interest in Formidine Rift as well as Hawking's Gap and the Scutum-Sagittarii Conflux, and a federal-backed community goal tasked the exploration community to gather as much data from these regions as possible. The Children of Raxxla launched a competing appeal for help against the Federation with the promise to release details of all Rift findings if they prevailed in the CG against the superpower. Many Rifters and explorers loyal to the Feds had to chose sides. Venturing out to the three regions to gather data and further map those regions, ultimately it was CoR and its allies who prevailed in the CG and by January 3303 information regarding hidden bases in the Rift, Gap, and Conflux was published. Data logs retrieved from the bases indicated that Salomé had been telling the truth about a power block conspiracy to hide information from the public.

Concerted efforts to search the Rift for more abandoned bases continued throughout the early part of 3303, and in April of that year another clue surfaced via GalNet - this time narrowing down the search even further. On April 18th 3303 a specific star system deep within the Rift and just a few light years deviation off the Reorte - Riedquat line was deciphered from the GalNet clue. Within hours a CoR survey team had been dispatched to the location, and on entering a system designated Syreadiae JX-F c0, the Formidine Rift's deepest secret was finally unravelled. A decades old ghost ship, the Zurara, had been discovered, and its ships logs revealed the dirty secrets that the superpowers had tried desperately to keep hidden for decades.

Today the region continues to draw adventures out to search its depths - despite the apparent conclusion to the Formidine Rift mystery that engrossed so many during the early years of the 34th century.