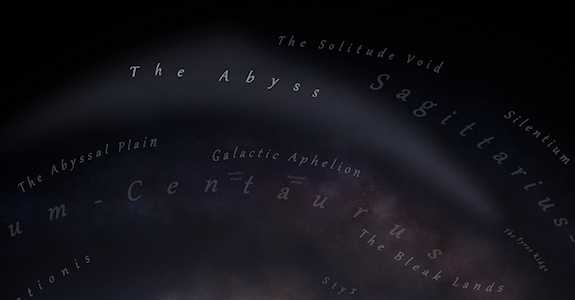 In the early days of deep space navigation, the Abyss was one of the first major hazards pioneer travelers encountered.

This interarm gap stretches at least 45,000 light years along the fading edge of the Scutum-Centaurus arm, and in places is over 2,000 light years across. The Abyss is so devoid of jumpable stars that it was once extremely difficult to cross in places - especially the western reaches of the region. With today's upgraded FSD ranges, and with the introduction of Jumponium, crossing the Abyss is no longer the daunting task it once was.

Early History of The Abyss :

In mid-January 3301, a lone Asp Explorer (The DSS Beagle) reached the edge of the far galactic arm and attempted to cross a foreboding inter-arm gap that looked so devoid of stars that it felt like staring into an Abyss. Indeed, the DSS Beagle had reached one of the most difficult to cross regions in the known galaxy.

During that period, route plotting technology was in its infancy. The unreliable route plotter had a maximum range of just 100 LYs back then, and often failed, and manual plotting - one system at a time - became the only way to make headway in places like the Abyss.

Beagle's first attempt at crossing this inhospitable region began toward the western edges of the region and ended in failure as approximately 500 lights years into the void no more systems in the ships' range could be located. At this point Beagle was forced to turn back and carefully retrace its route back into the denser sectors of the Scutum-Centaurus arm.

A few days later Beagle had traveled approximately 6,000 light years 'eastward' along the outer edge of the Scutum arm, looking for a denser ridge of stars across the void through which to make a second attempt. Eventually that ridge was located, and within 24 hours DSS Beagle had made the first known crossing of the Abyss and had entered the fading edge of the far outer arm.

Crossing the Abyss and the news that followed its announcement in GalNet at the time, became the inspiration behind the whole Galactic Mapping project, which was launched a few weeks after that first historic journey.

By: Erimus Kamzel
Coordinates: Unavailable
27 waypoints in The Abyss route.