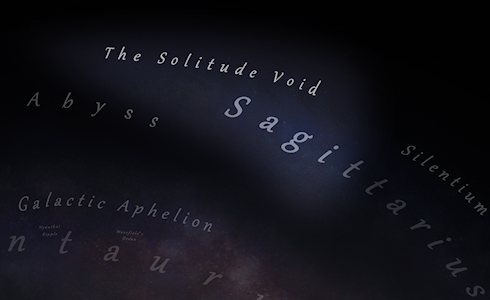 Very low density void beyond the Abyss at the tip of the Sagittarius-Carina arm. Star density is higher here than in the Abyss, but still lower than what might be found elsewhere along the Galactic Rim. Among certain explorers this area is also known as 'The Briar Patch' (source).

Solitude was thus described by the first commander to traverse through the region (January 3301) - "...a place of complete remoteness due to its sheer distance from humanity (on the opposite side of the galaxy). There is no place like it throughout the entire galaxy. Out here on the galactic rim there is nothing but inky blackness outside my cockpit window giving me a real sense of remoteness. The central Milky Way looks so distant, just a band of distant bright stars with little colour or structure some 35,000 LYs away, with the Frontier and homeworlds yet another 30,000 LYs beyond that! Outwards looking there are a handful of stars still further out but they're beyond the jump range of my long-ranged Asp.. and then nothing but the intergalactic void.."

In 3302 the Solitude Void was revisited by the Distant Worlds and Sagittarius-Carina expeditions. For some time Beagle Point became a social gathering place for explorers - temporarily dispelling the solitude of the void.