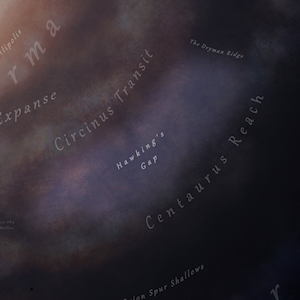 Hawking's Gap is located almost like a lake, between the shores of the Scutum-Centaurus and Sagittarius-Carina spiral arms. To the north-east the gap is walled off by the Dryman Ridge. To the west the Gap gradually narrows towards the Scutum-Sagittarii Conflux, and this part of the gap are called the Lin-Shu Hollow.

The region is relatively devoid of nebulae, with the notable exception of the Pueliae Nebula that sits like a solitary island almost exactly at the center of the Gap.

The region was named in honour of the legendary 21st century scientist, Stephen Hawking.

In the late 22nd century the IAU (International Astronomical Union), the forerunner of today's Universal Cartographics, named the region in honour of the 21st century astrophysicist; Stephen Hawking.

In 3303, data logs from several abandoned settlements from the region were retrieved that referred to the region as being called "Hawkin's Gap". A slight deviation from the original name that was established a century earlier. The data logs date back to the year 3270.

In mid 3302, the political dissident and outcast, Salomé, relayed a message to the Children of Raxxla indicating that (as well as two others), "Hawkin's Gap" was a region of great interest that should be investigated.

The use of the 3270 spelling in Salomé's communique (a name that had never been seen in any other historical context prior to her message) is thought by some to prove that she had tapped into the archival databanks and was aware of the 'Dynasty Expedition' and its purpose before the settlement datalogs became public knowledge several months later.

Conspiracy theorists suggest that prior to her detainment and subsequent silencing, Salomé deliberately and subtly, used the miss-spelt name on purpose in her communique, to show that she did indeed have insider knowledge of the 'Dynasty Expedition' and had either read the logs or other information relating to them. For what end, remains unclear.