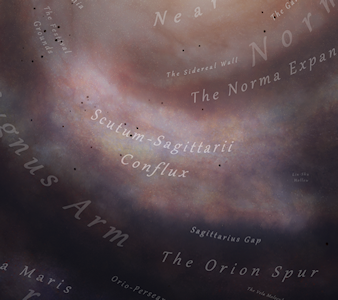 The conflux is a vast area characterised by turbulences in the interstellar medium due to the gravitational interactions between the Scutum-Centaurus and Sagittarius-Carina arms as they come together - or rather, as they branch apart.

The name "conflux" is thus technically a misnomer, as the galactic spiral arms are not like rivers flowing together, but rather caused by density waves generated by the galactic bar at the core and propagating outwards. Despite this, the name remains popular among deep-space explorers as it invokes the image of a turbulence prone area. The turbulences are much too small to be noticeable during ordinary spaceflight, but on an cosmological timescale they have profound effects on star formation in the area.

The Scutum-Sagittarii Conflux is one of the most heavily traversed areas of the galaxy outside of the local region due to the sheer amount of explorers heading coreward during the golden age of deep space exploration (November 3300 to present day). The discovery of Jaques Station near the root of the Scutum-Centaurus arm has only increased the amount of traffic through the Conflux.