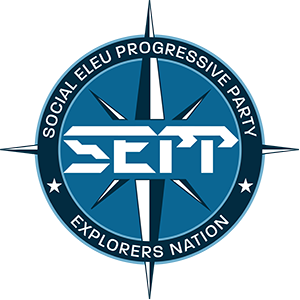 SEPP is one of the longest running commander factions in the Galaxy, founded in February of 2015, shortly after the launch in December of 2014. It basically started when then cmdr Kancro Vantas started pushing an existing NPC faction in ELEU and accidentally causing it to expand to the neighboring system of SANTJALAN. Since then, it became clear the background simulation and changing a system politics -and even its market-, was a possibility! We now regard ELEU as the Capital of a Nation that includes over 20 systems between the bubble and Colonia combined -and growing!

Since its creation, we have overcome some obstacles and achieved important goals as well as witnessed some of the most interesting developments of the community and the galaxy! Hundreds of commanders have supported our group through our history and we have a closely tied team of cmdrs that keep this organic project going!

We participated in the Lugh Wars on early 3301 supporting the Lugh independency and the Mercs of Mikunn -to date one of the most bloody wars ever, first event using CG in the game and it yielded historic results for BGS-, we survived the Cerberus Plague of 3301, we saw our Capital, ELEU, taken away by the Federals, and lived in exile in SANTJALAN for almost 9 months, we were one of the main co-organizers and supporters for Distant Worlds Expedition in 3302 -and are already involved in the DW2 Expedition.

We were selected as one of the top 5 factions in the game in 3302 and were automatically selected for the Dangerous Games, which we finished in 3rd place in spite of being the smallest faction by far (we were around 10 commanders in the official roster versus factions that housed 300 cmdrs or more!) We have confronted some serious enemies but overall and most importantly, we have had an awesome fun time doing it and have learned lots!