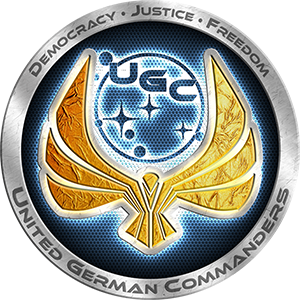 Longing for freedom and independence and the belief in equal rights for everyone drove our ancenstors from earth into the void. Wandering through unknown space far away from the trade routes of the super powers our ancestors found a new home in the system WAPIYA. Like brothers they worked side by side to fullfil their vision of a better future for mankind.

Life was hard at the frontier but step by step our ancestors built a new society. As times went by nearby star systems were populated, new trade routes established with our neighbours. Their peaceful attitude and pride about the achievements made them overlook the changes at first. Outposts and factions from the empire settled in the area and became more and more influential. They had a lot of patience but from generation to generation they tightened their grasp and pushed our culture and ideals nearly into oblivion. Imperial nobles treated them more and more like serfs, on their own ground. And then Torval came - and live became unbearable.

More and more people grumbled about their oppressors and remembered the legacy of their ancestors from central europe on old Earth. A group of pilots secretly founded the UNITED GERMAN COMMANDERS and united under this banner we began to fight back. Badly outnumbered and outgunned we were only an annoyance to the imperial rulers at first, but with the people backing us and hindering or even sabotaging authority forces whenever they could, we persevered. Unwilling to pour more and more ressources into holding an increasingly unhospitable system the ruling aristocrats finally withdrew to friendlier systems and their minions fled to outposts and ground bases. The UGC broke free of the imperial chains despite impossible odds, freed the slaves and reestablished a democratic government.

But the battle is not over, it has just begun!

Will you join us?!

If we have aroused your interest and you would like to join us, as well as the German language, then we would be pleased to receive a short description of your person or the game direction and playsite in our current applicant thread. After receipt of your application you will receive all further information in the form of a private message and a commander of the UGC will take care of you.

Join requests on EDSM will be ignored, unless you have contacted us on our website. Please understand that we want you to introduce yourself, before we will accept a join request.