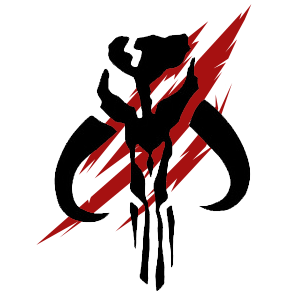 ABOUT CLANS OF MANDALORE The Mandal system was first developed by a prospector hoping to better the nomadic warrior clans of his people and give them more than just wars in the stars. Because he would always bring Mandal ore to the nearest refineries, he simply took on the name of "Mandalore." His people, in reverence for the strength of the man and ore, became known as Mandalorians. To preserve the warrior code of honor and fighting prowess that was much like the ancient Spartans and Celts, they promoted heavy military training and culture alongside their everyday lives, calling their best warriors and sentinels the Death Watch and Mandalorian Protectors.

There have been several "Mandalores" throughout the years, as the clans of Mandalorian people have spread across the stars.

Strength is life, for the strong have the right to rule. Honor is life, for with no honor one may as well be dead. Loyalty is life, for without one's clan one has no purpose. Death is life, one should die as they have lived. Speak the language. Wear the armor. Serve the clan. Rally when called. Defend your children and raise them as Mandalorians.