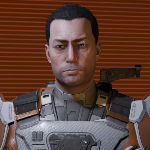 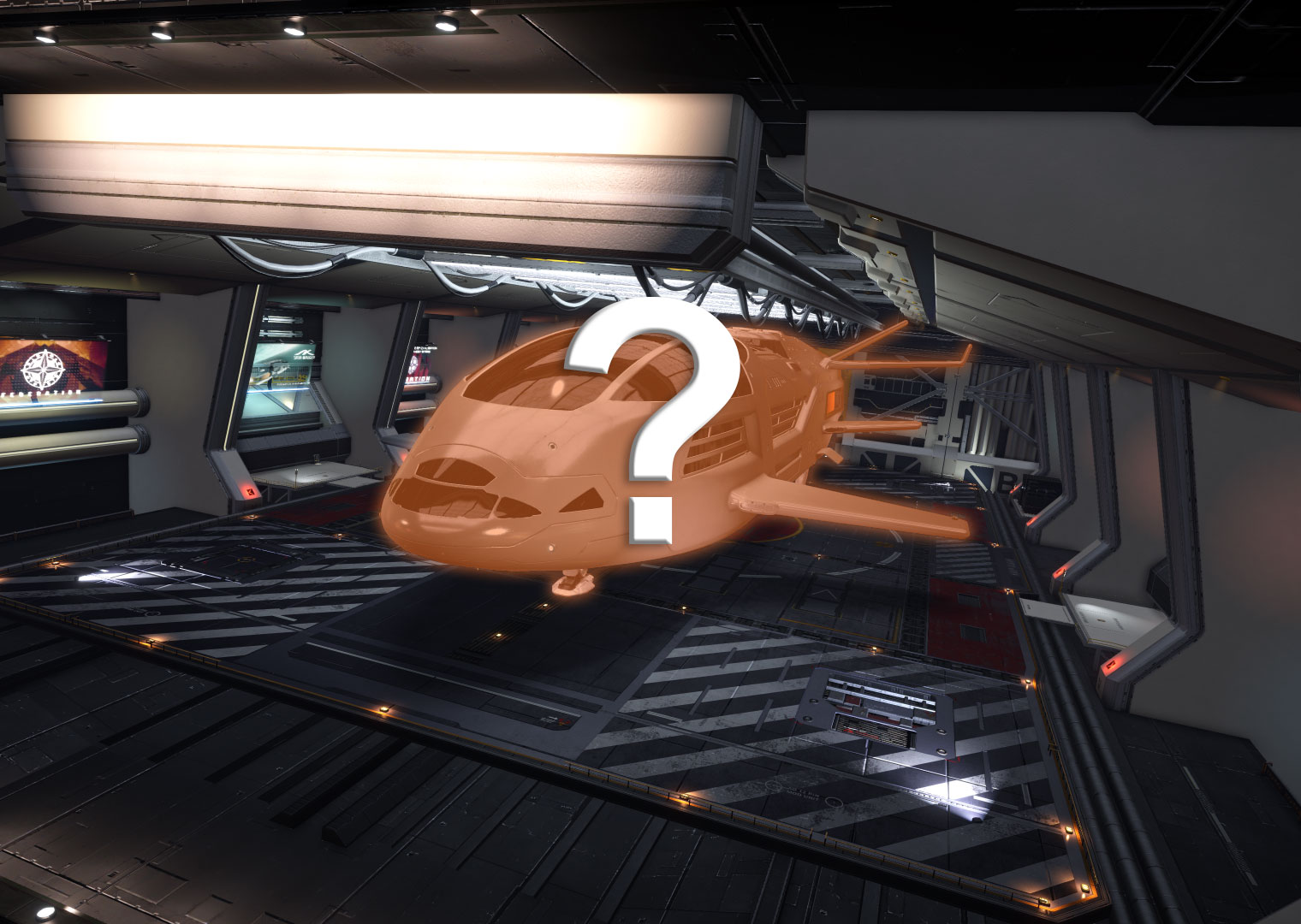 I wish I could do it

I found another Earth-like world. This is the first I discover in the Errant Marches, so I decided to get as close as possible to give it a good look. 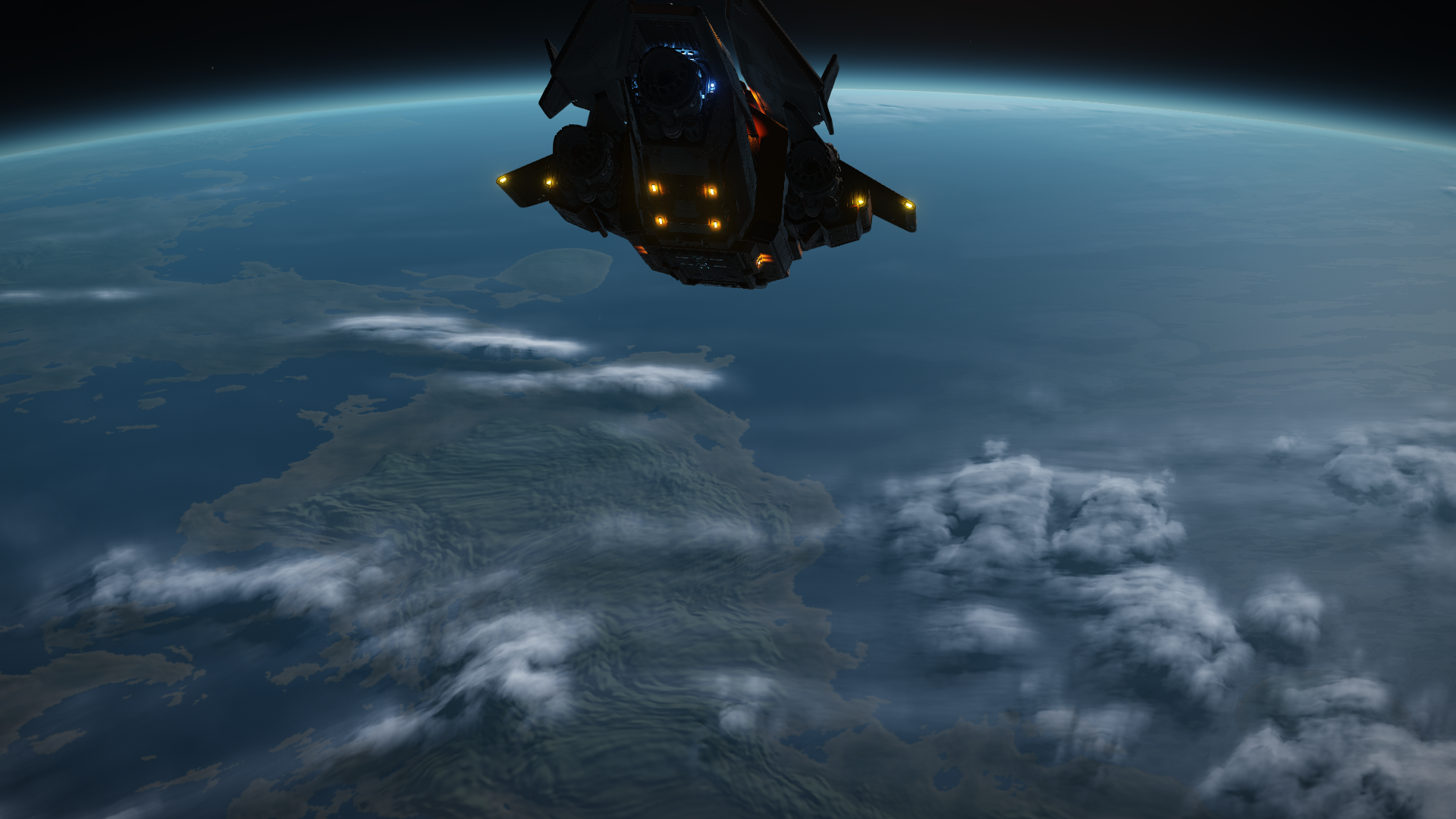 I really wish I could land on this planet, or any other ELW for what matters. It's nice to be able to observe alien mountain ridges and seas from orbit, but being able to visit them personally, touching that grass or bathing in the water....maybe even breathing its atmosphere, what kind of sounds and smells would I discover there?

I like my ship, but since I've become a pilot I spent the vast majority of my life breathing canned air, in the ship, in the SRV, in the stations... I'm really starting to feel the need for fresh air.

Today I've reached a couple of goals: I've made my entrance in the Errant Marches sector (the 4th one I visit since I've left the Bubble) and I also crossed the 25Kly marker from Matet, where I got my licence and ventured out in space on a ship on my own for the first time. Brings back lots of memories....

I'll spend sometimes remembering and celebrating while perched on top of this snowy mountain overlooking the reddish cratered surface of an unknown world. 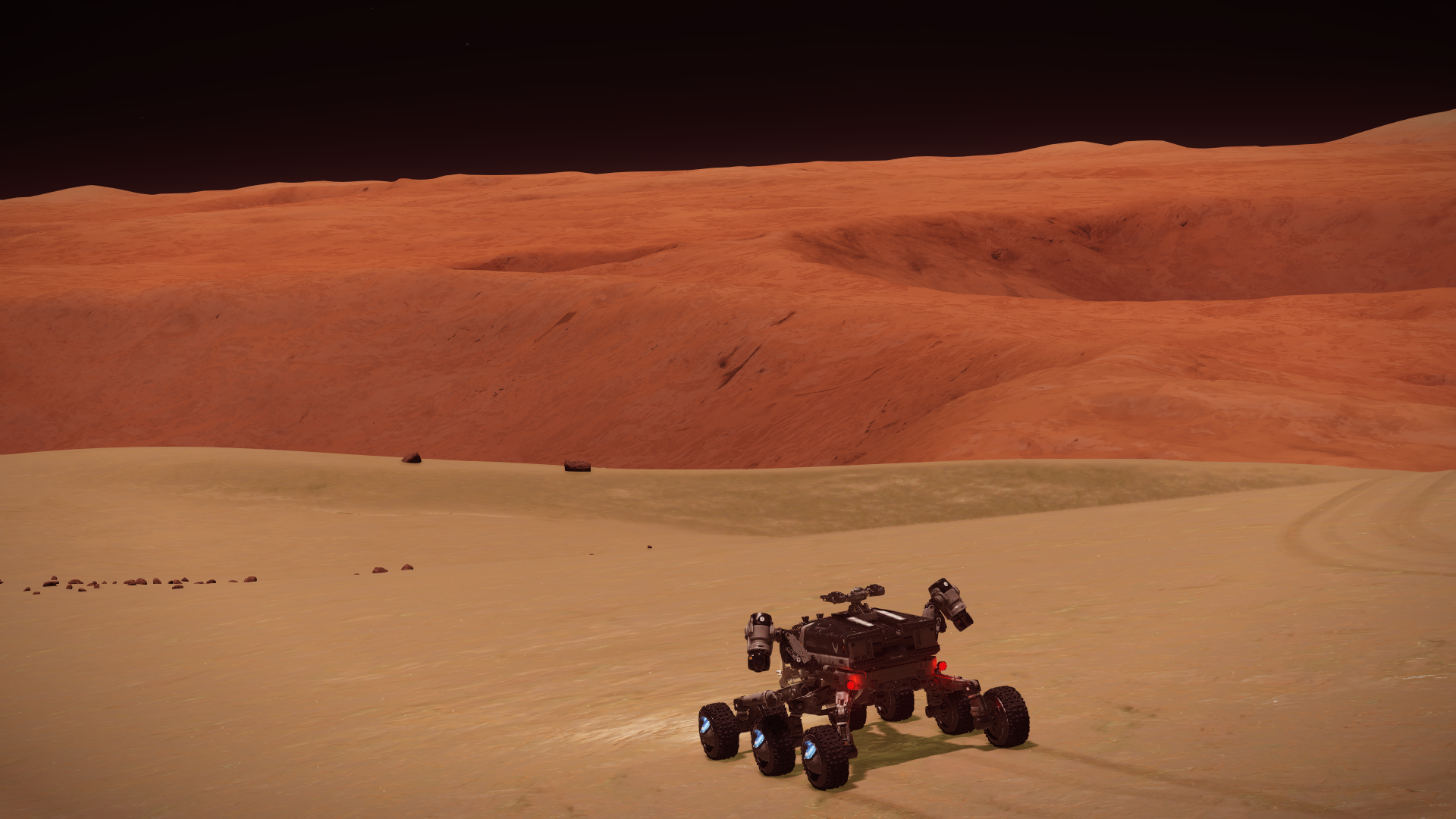 Today I found this nice blue planet, surrounded by a huge display of rings. 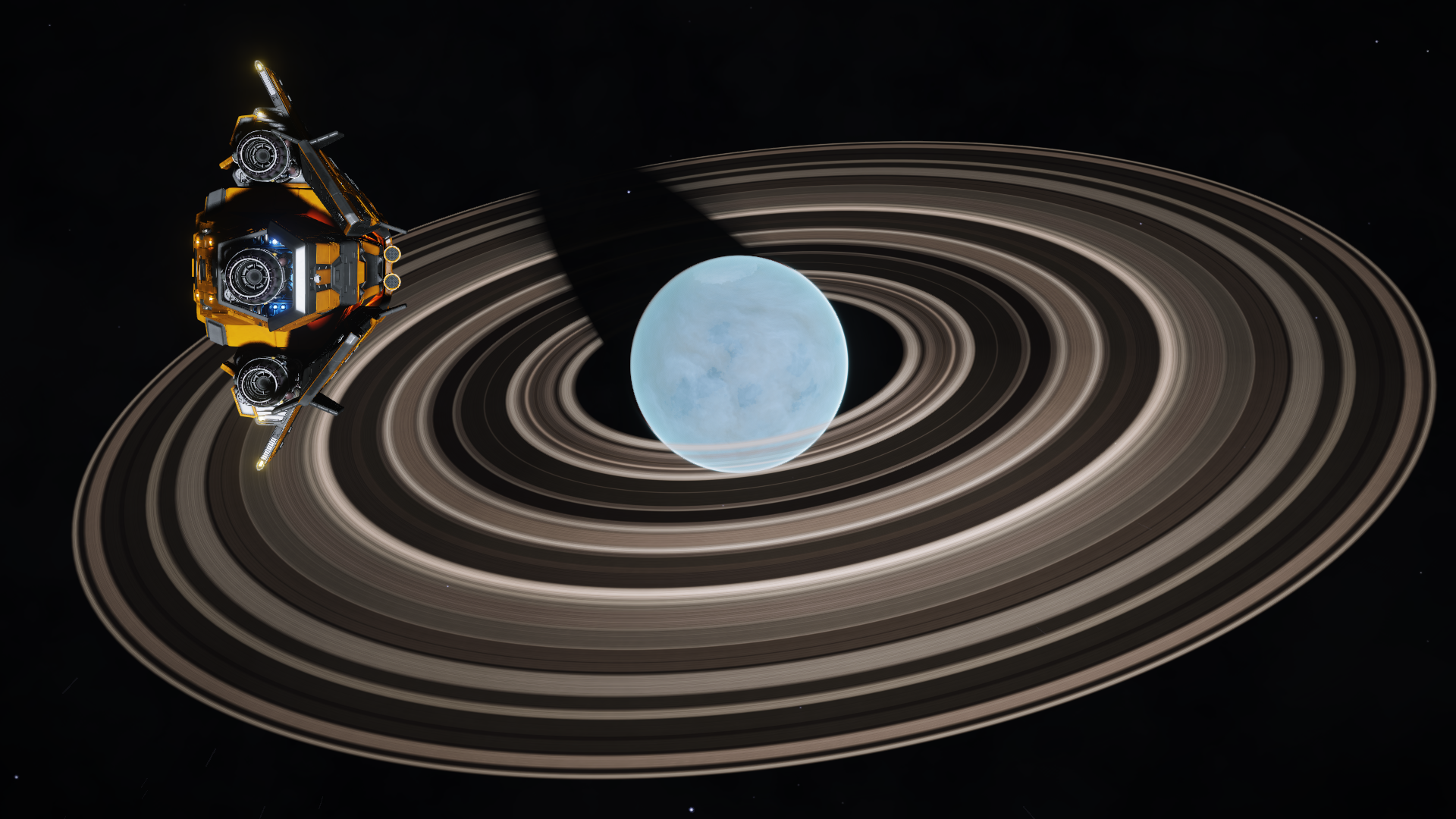 The trip is going as planned, now I'm more than one third of the way since my last contact with humanity to my target on the Western meridian in the Outer Arm, still 9Kly to get there anyway. This is however just a small part of the overall trip, planning to reach the Outer Arm Rift and from there to Colonia and maybe Sag.A*.

I've decided to take a more direct route, without using neutron star assisted jumps. This will require about 20 more jumps, but I do prefer visiting and discovering new systems, to enjoy interesting sights no-one else has seen before, and share them in this logbook.

The neutron stars are almost all already discovered by someone else, and the same goes for the systems in their immediate vicinity, probably because the route-plotters guide everyone in the same path.

To close, here is another nice shot I took before logging off to rest. 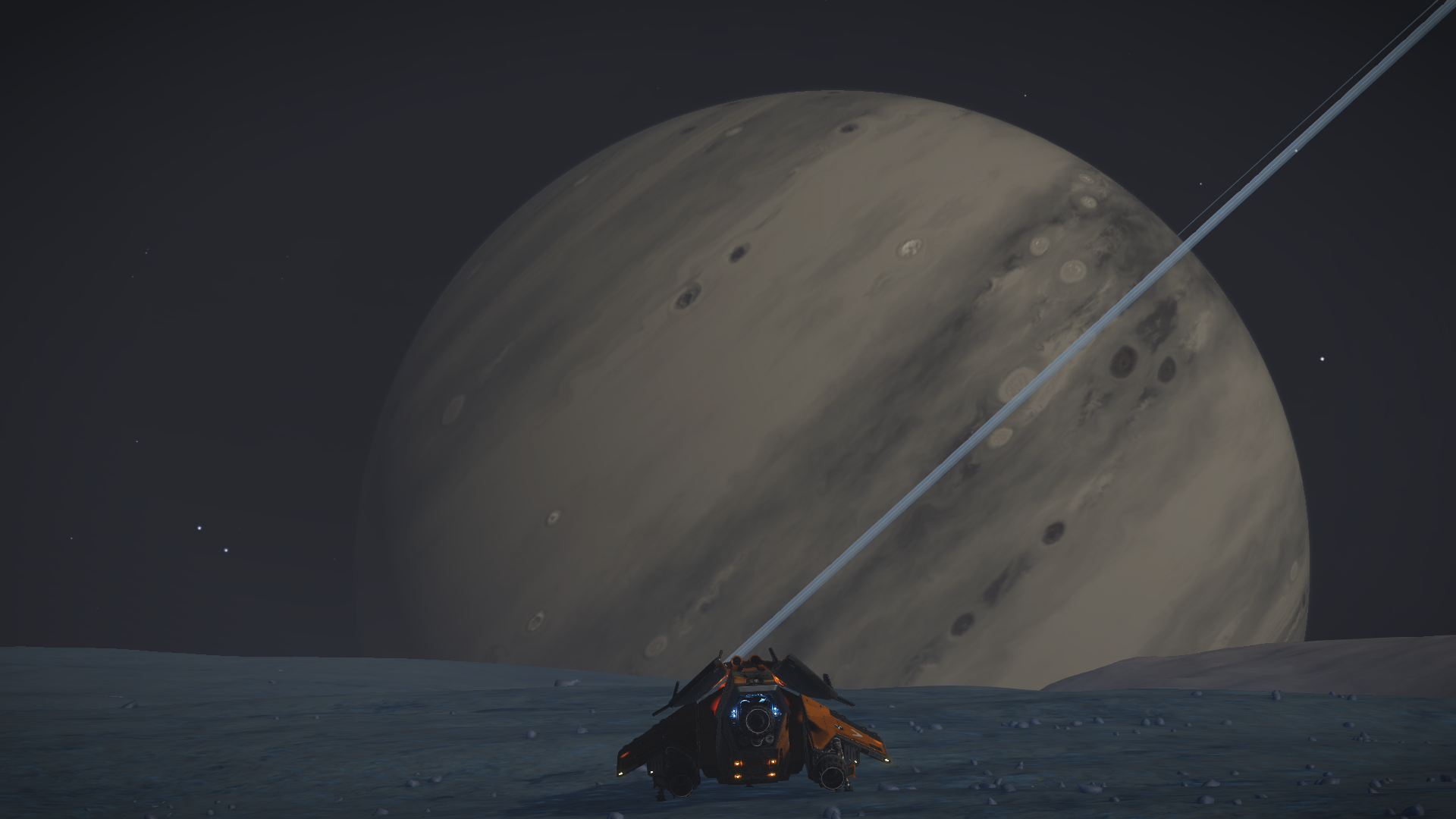 Just a quick entry, this picture summarize what I like most: two very close moons, just a few thousands Km away from each other, lingering on the edge of the rings of their main planet. Here it seems that everything is within reach of my hands. 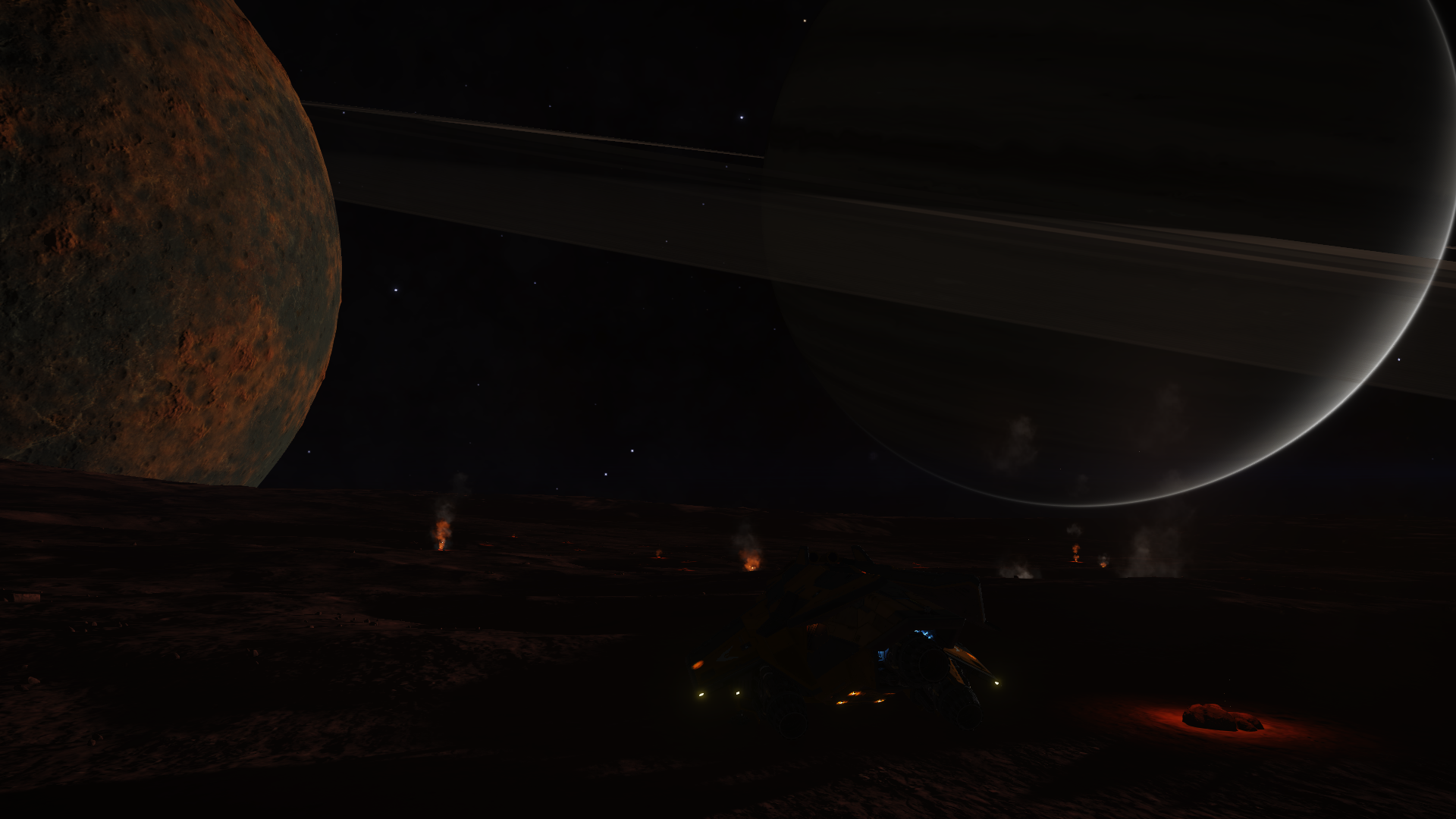 In a few hours, in the Sirius system, some 24KLy from my current position, the leaders of the Federation, the Empire and the Alliance, along with other representatives of several minorities, will meet in the first Galactic Summit.

The news are buzzing about this, lots of VIPs, many speeches and declarations, the usual mix of this kind of high-profile political events. And whether we like it or not humanity's future is shaped by them. 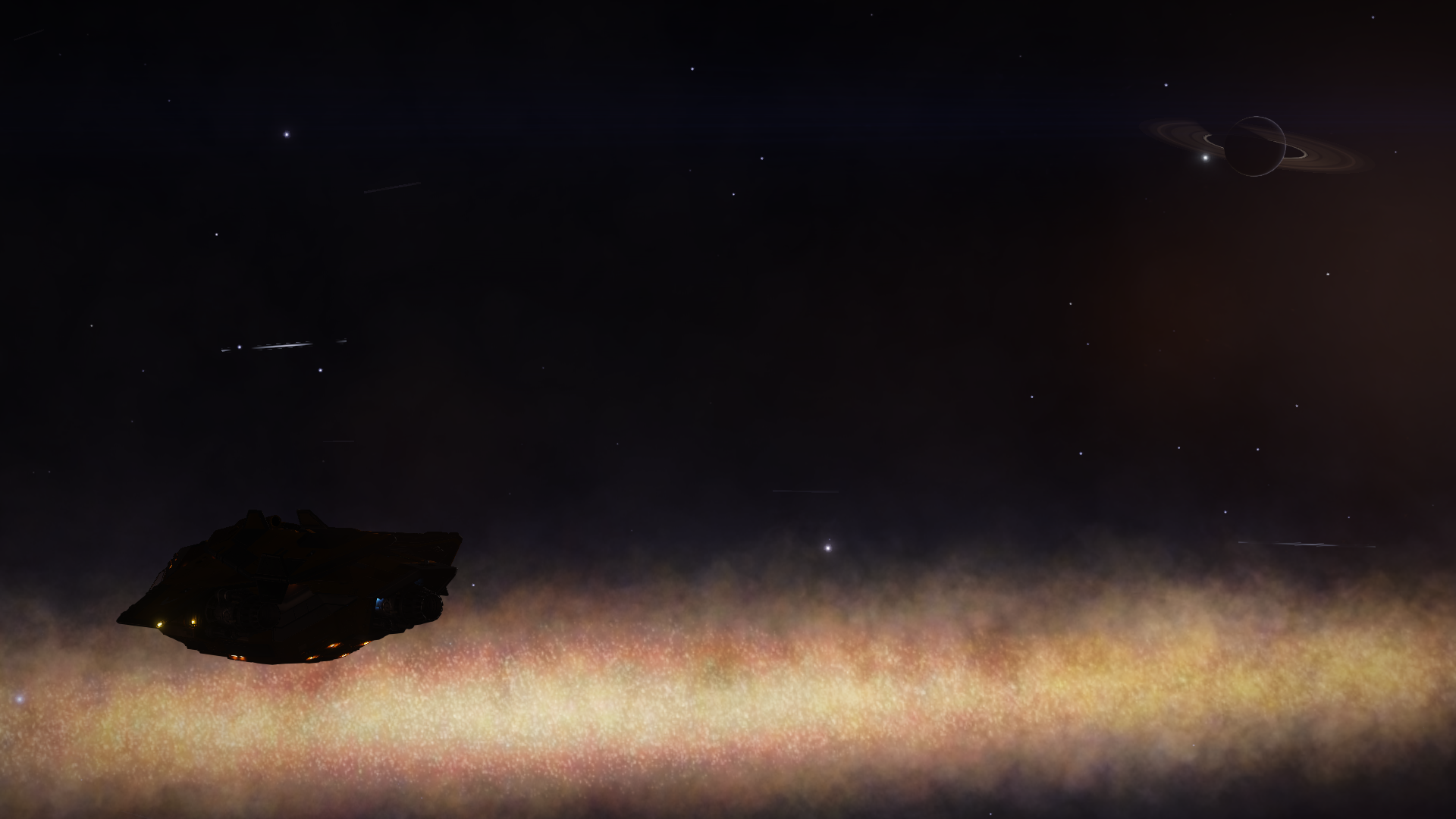 Yet, from my vantage point, looking down from here the galaxy is so big that all of our little shenanigans and tantrums seem meaningless. We are just starting to know and explore the Galaxy, calling this summit of one of the less evolved space-faring races inhabiting the Milky Way a "GALACTIC" Summit is more of a joke. I wonder what the Thargoids will make of it, or even the Guardians if they are still alive somewhere.

I don't really care about the summit, I'm a solitary person, not really a misanthrope but I don't mind staying on my own. It's probably a common trait among explorers, after all we spend long months alone amids the stars.

For the time being I'll just read the news, gotta pass the time somehow, while enjoying some beautiful alien view like this: 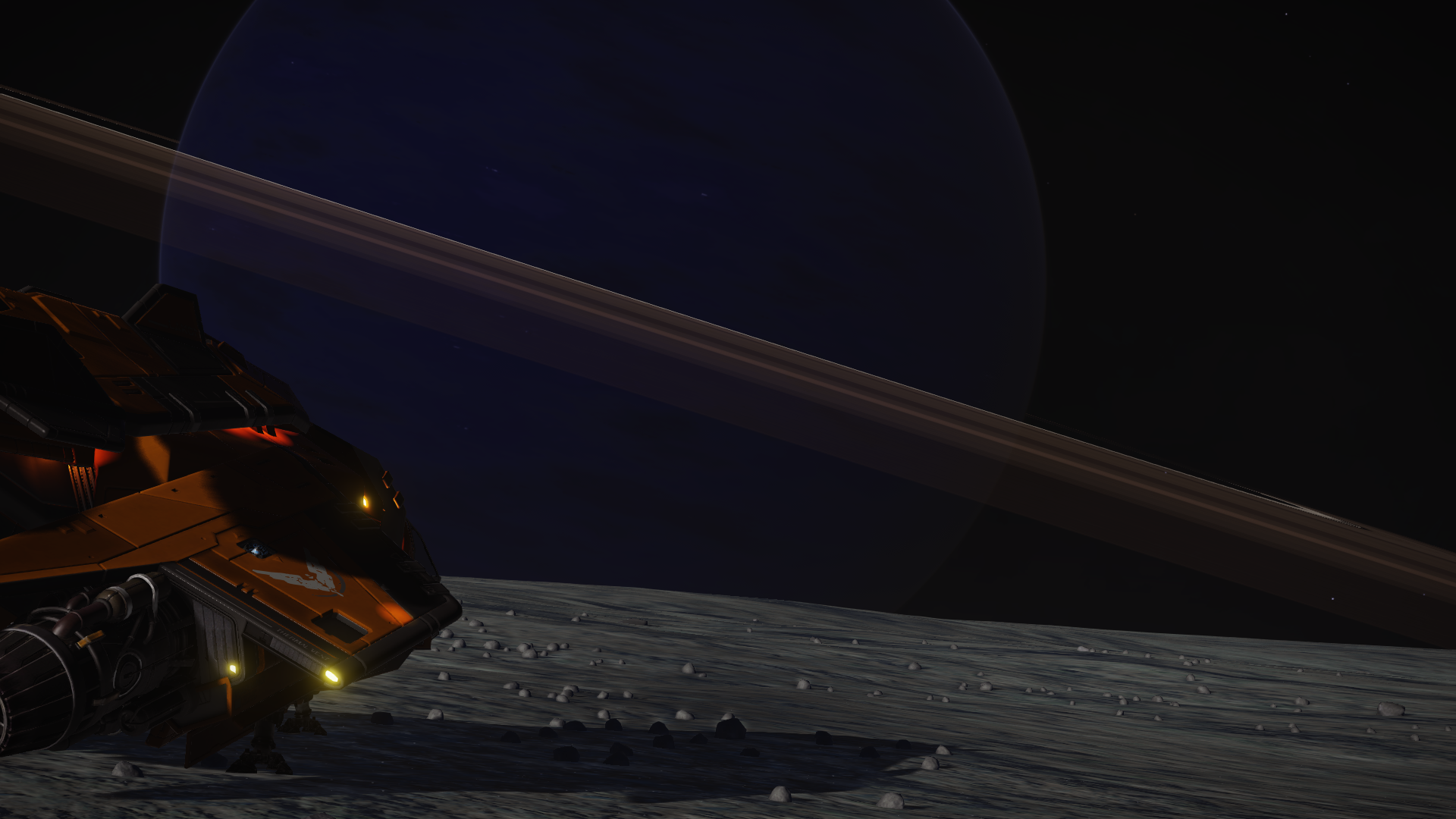 Still cruising north-west. I decided to get a bit closer to the galactic disk and use a few neutron star enhanced jumps to speed up the trip....exploring is nice, but I still have about 12KLys to the western meridian spot I'm aiming to.

While travelling I sometimes stop to rest or to do a few repairs to the ship modules. Usually I try to find a nice spot, with a photo-worthy view. It's not always possible, but today I found a couple I think are interesting.

The first one is an icy-moon close orbiting to another one: I managed to land in a canyon with a yellowish hue on the terrain and when looking up a caught a very nice view it what is litterally a "blue-moon" :) 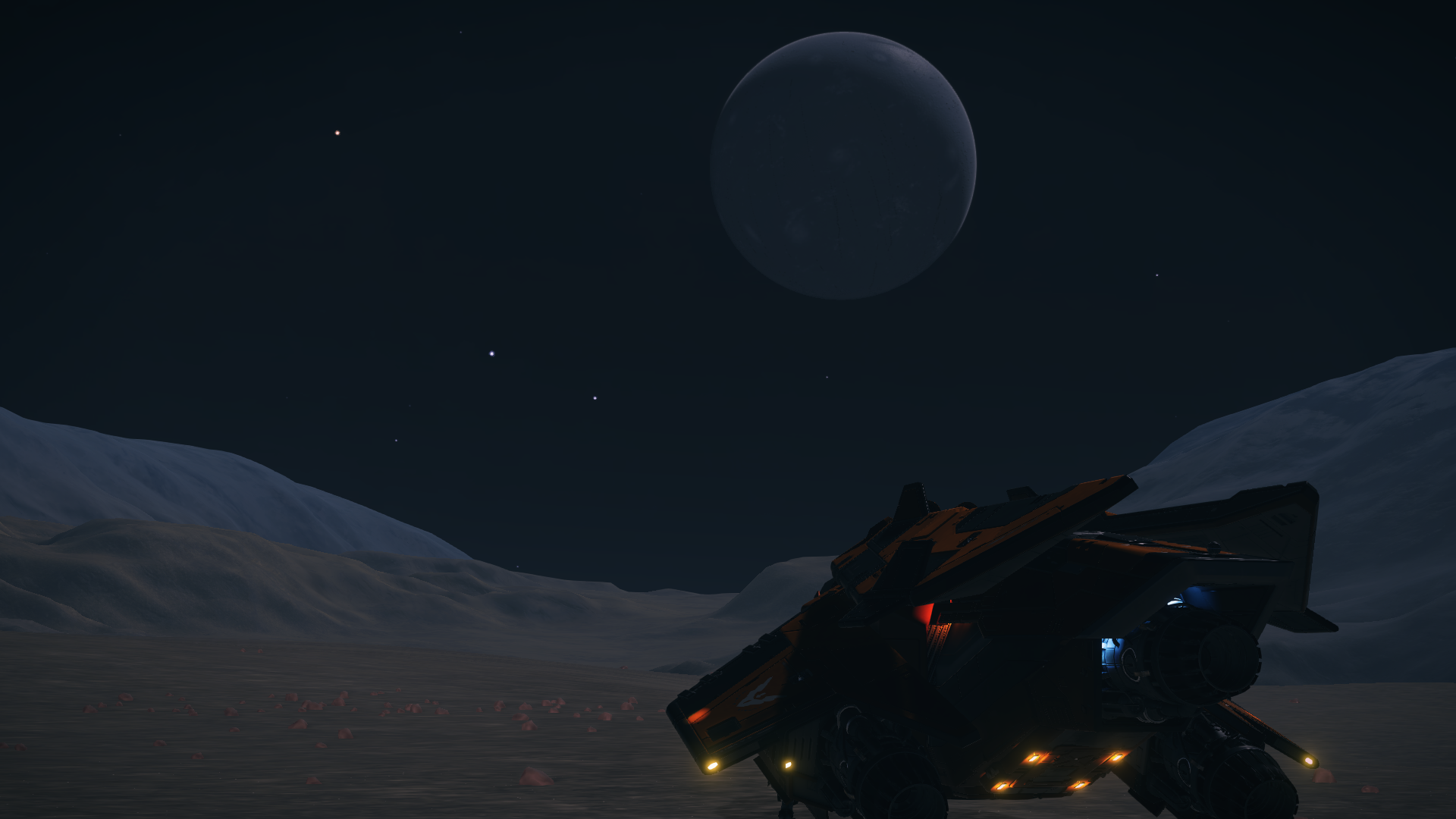 For the second landing I actually chose to aim for a very big crater on an HMC world. pretty close to its star. It's not an unusual landing spot: these craters are very visible from orbit, and if I do not have any other interesting spot to aim for, they are a quite obvious choice. Usually I found a pretty empty area, sometimes with a lot of haze. This time I spotted an interesting area: a big crater into the huge one. 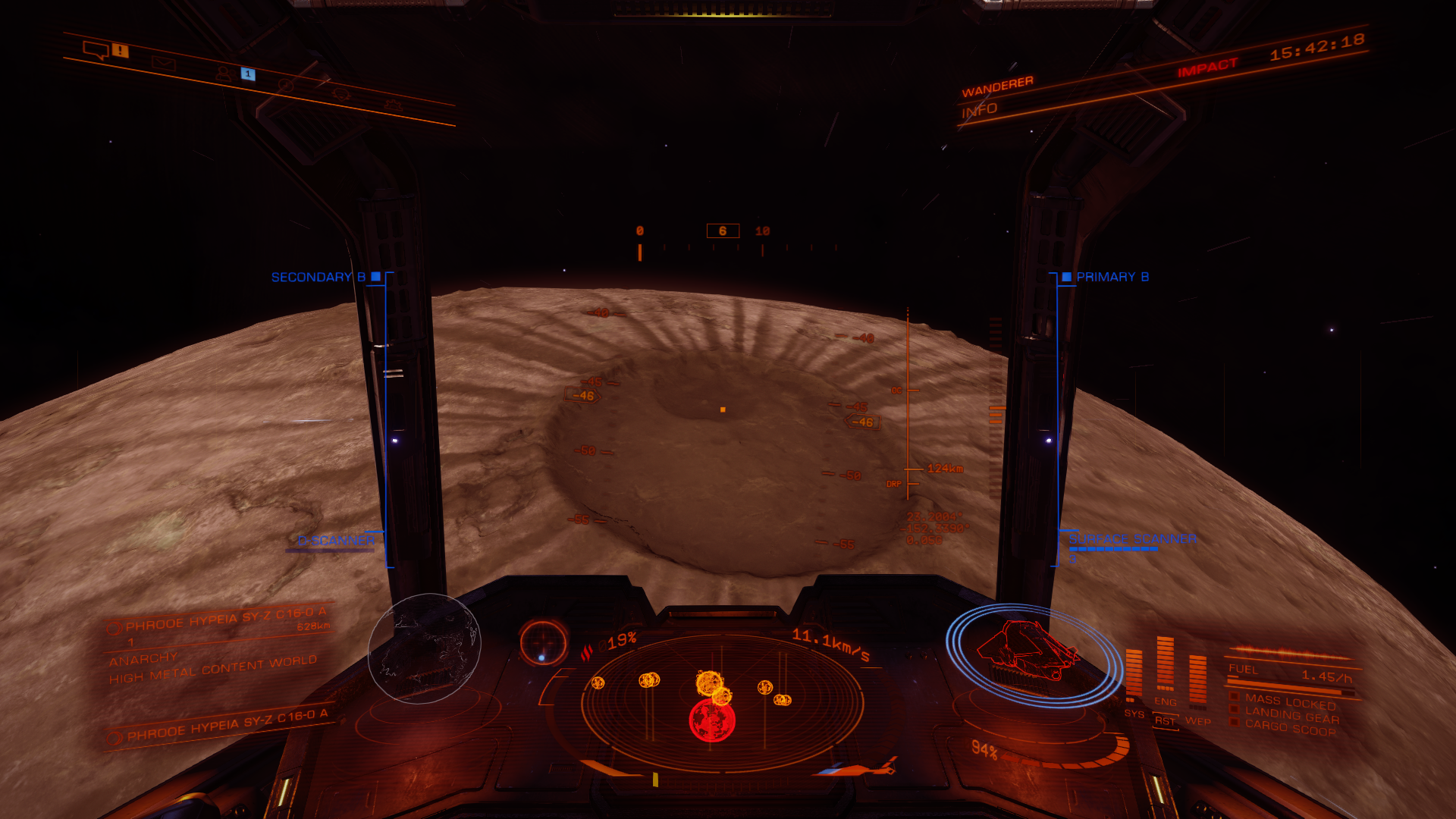 In the middle of the second crater there was a small peak of ejecta so I decided to land on top of it...just because ;) 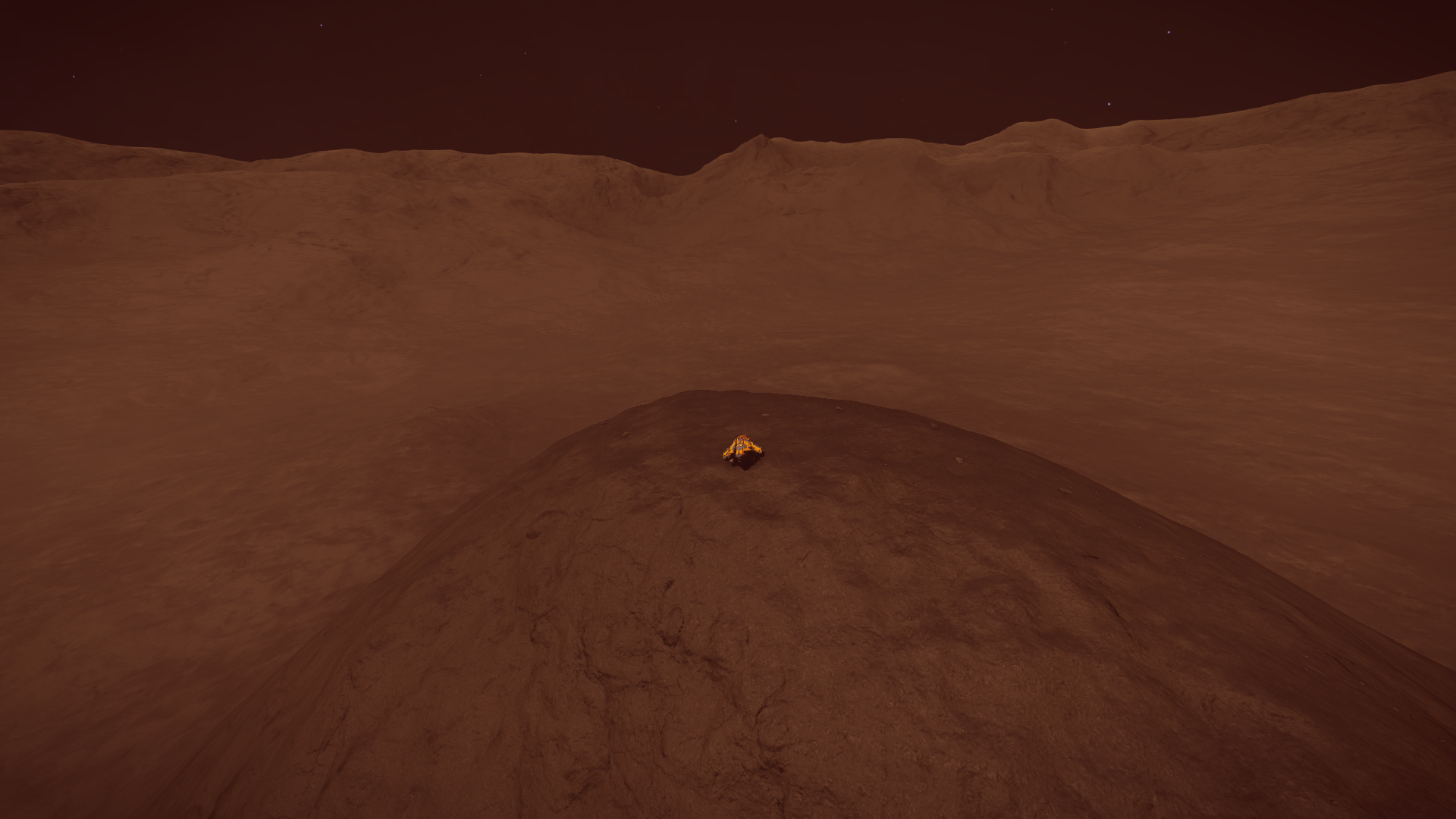 On my route to the western meridian I managed to get very close to the edge of the outer arm. I'm used to see few stars in front of me, but there's something different in knowing that this is not just an area with a lower density within the disk but the real intergalactic void I'm looking at. 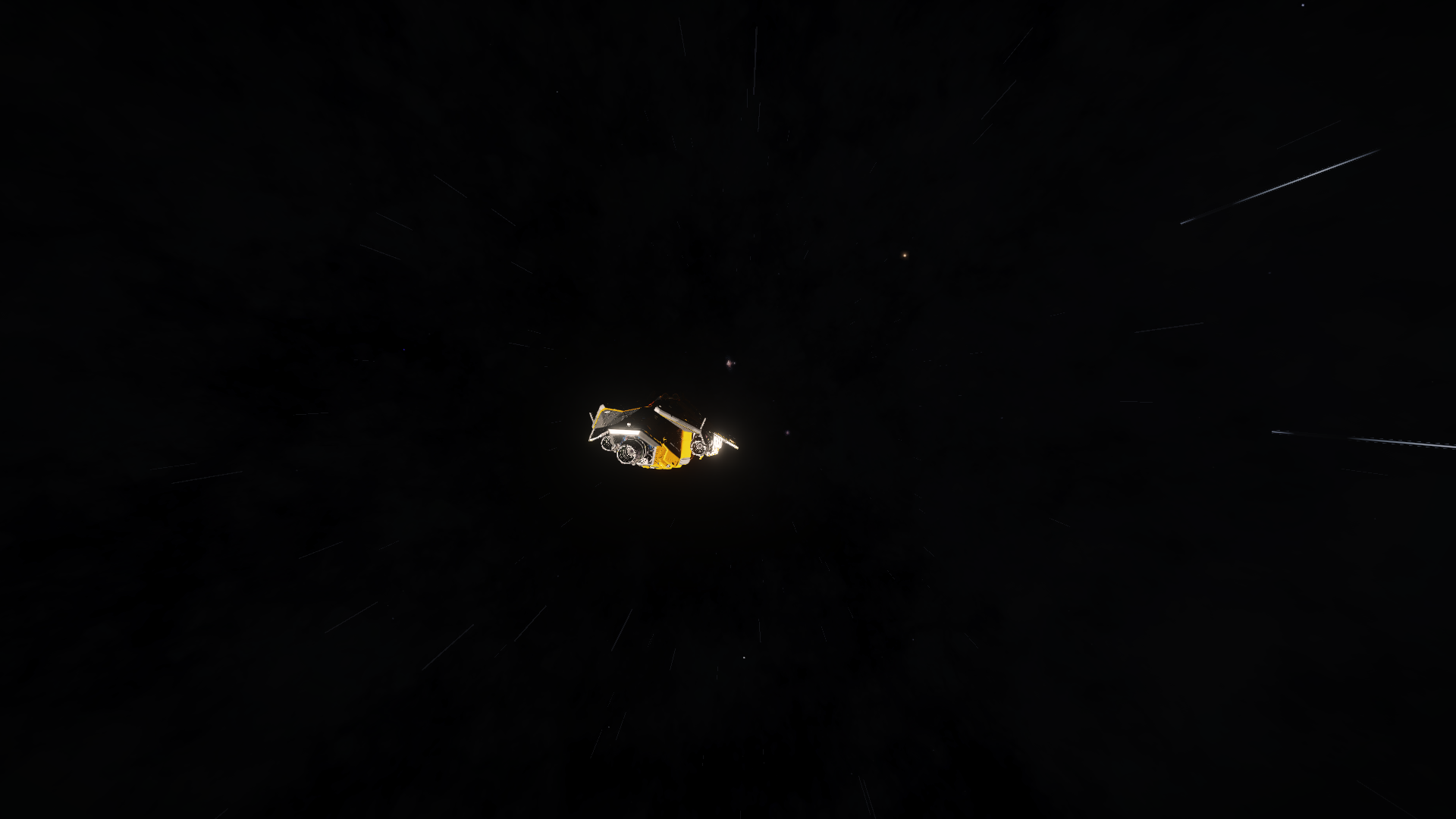 Zooming in the field-of-view actually allowed me to see two neighbour galaxies: M31 (a.k.a. the Andromeda galaxy and M33 (a.k.a. the Triangulum galaxy). Will humanity be able to get there someday? 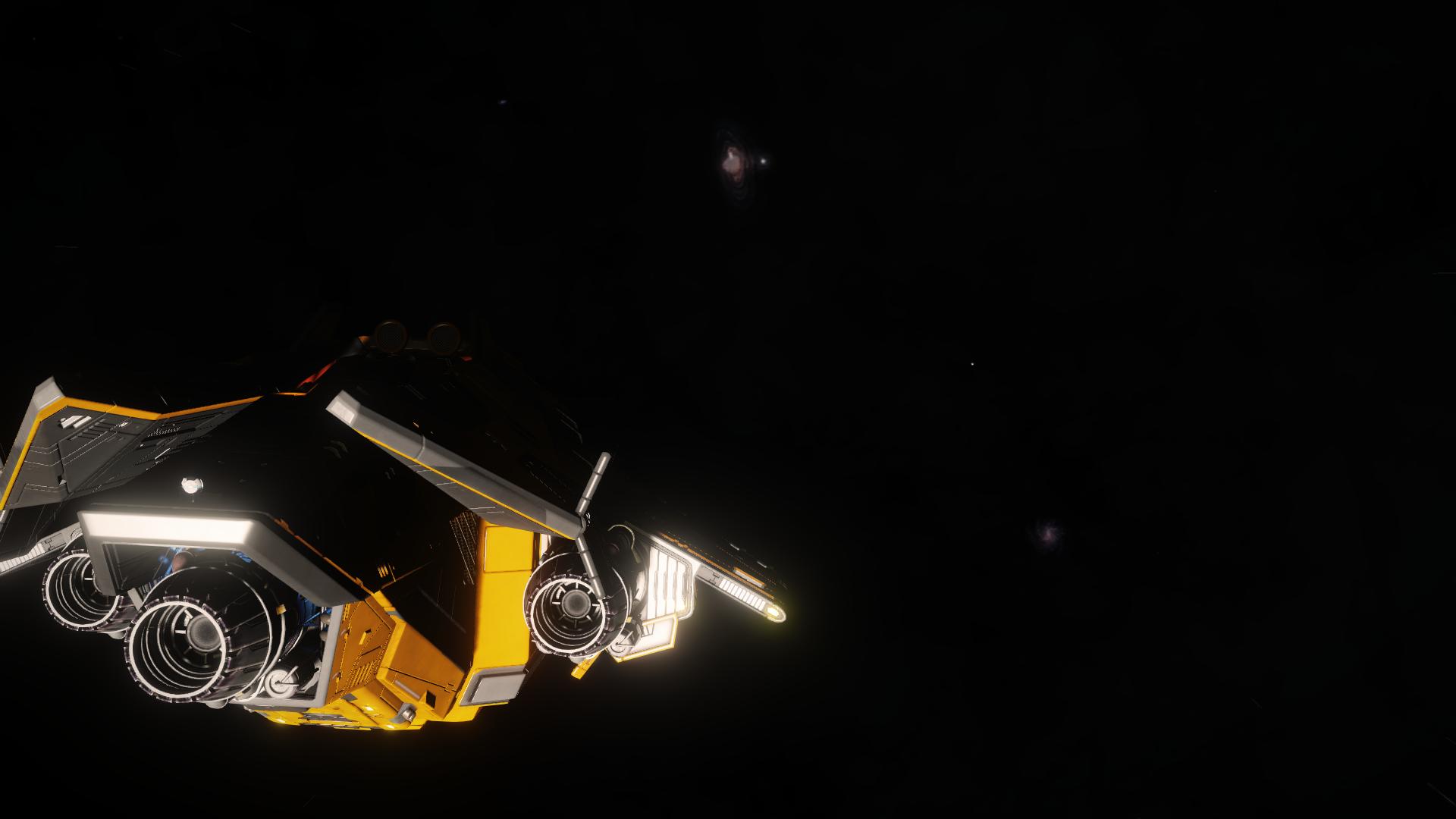 During the scan of Dryu Airgh MV-C c26-0 I spotted a couple of very close icy-moons so I decided to get a closer view. From the Nav panel the two moons appeared to be about 0.01Ls apart, but when I approached them the real distance was actually just 5.000Km. 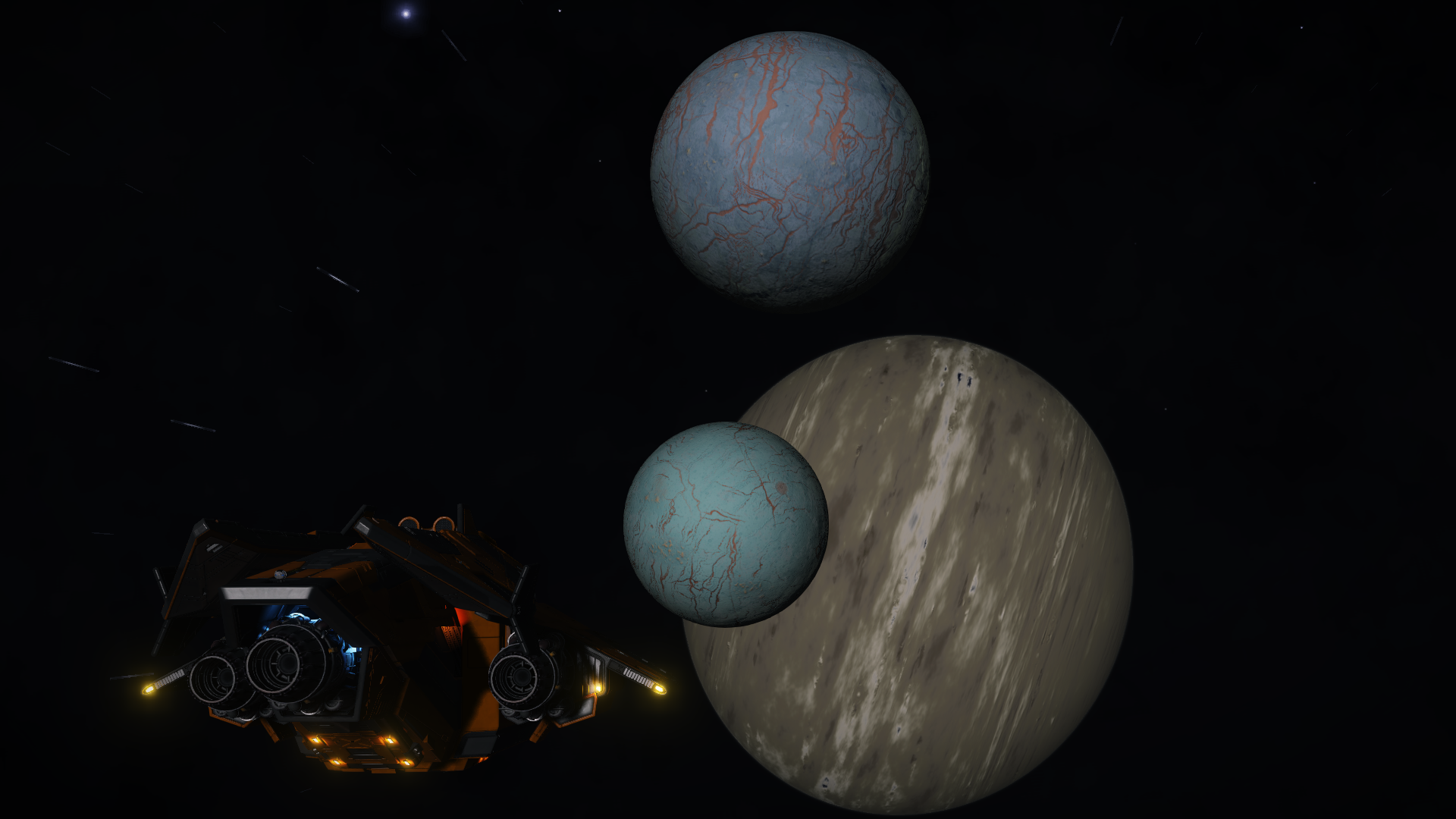 Besides being very close there was nothing really special about the two moons, a nice picture, yes, but not much more than that. My eyes where actually caught by something I noticed on the gas giant they were orbiting.

Among the withish clouds and usual storm systems that are pretty common on this kind of planets, I noticed a few dark blue patches, so I went closer. 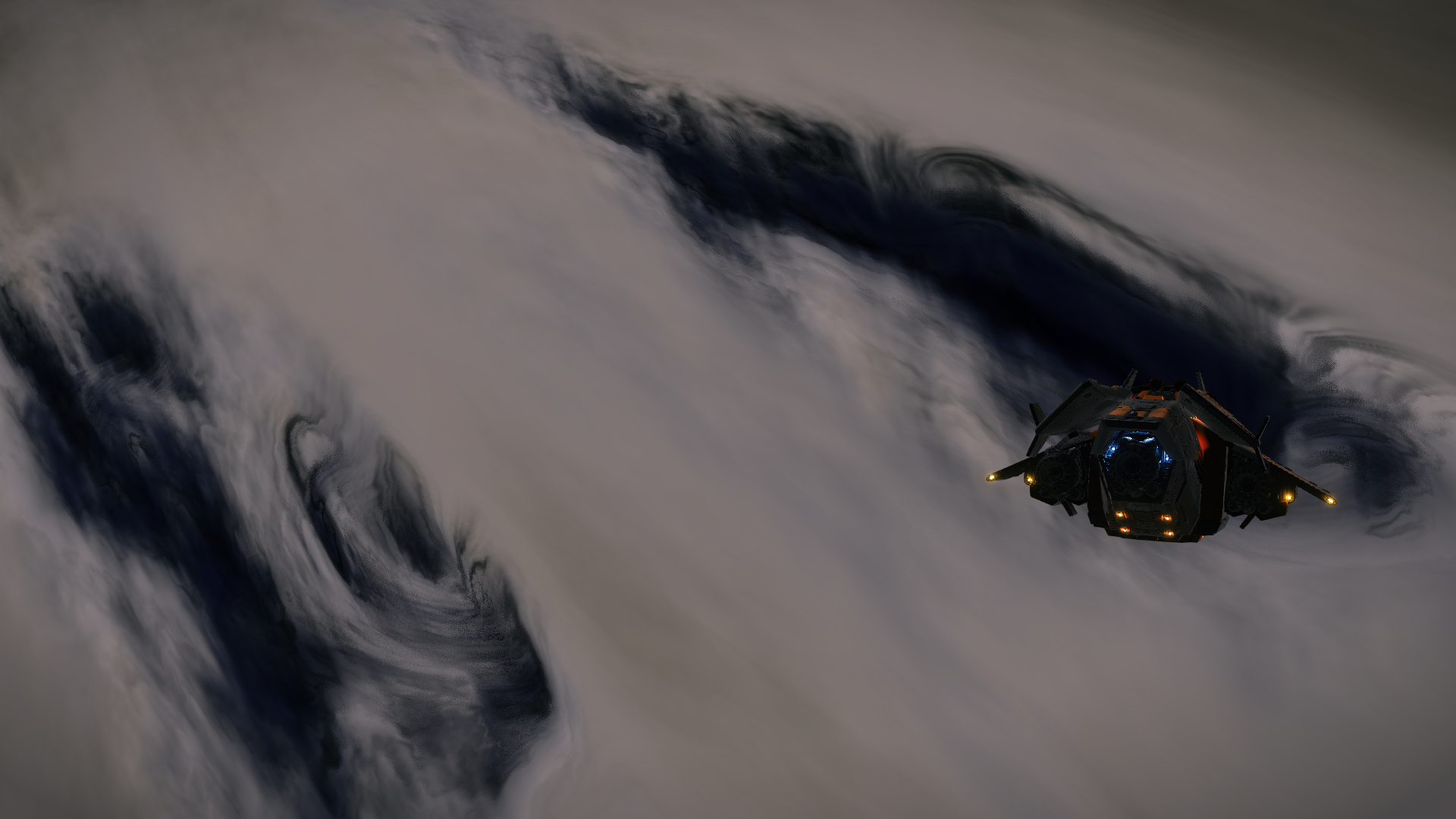 The dark patches where actually openings in the cloud layer, letting the eyes get a glimpse of what was below it. Most probably the different colour was due partly from the shadows of the upper layer and partly to a different chemical composition. It was indeed an intriguing sight into the unknown. I miss the ability of doing atmospheric landings: not that I would have been able to land on this planet (for all I know there's no land to speak of in a gas giant) but maybe I could have gotten closer to the gaps in the clouds.

Anyway for now what lies beneath those storms will remain a mystery.

When looking for a place to land, a few jumps further in Dryaea Aick CL-E c25-0, I managed to find another close pair of moons, this time rocky bodies. They where further away from their main planet, so I couldn't see if there where interesting features on it during approach. I still managed to get a couple of impressive pictures anyway. 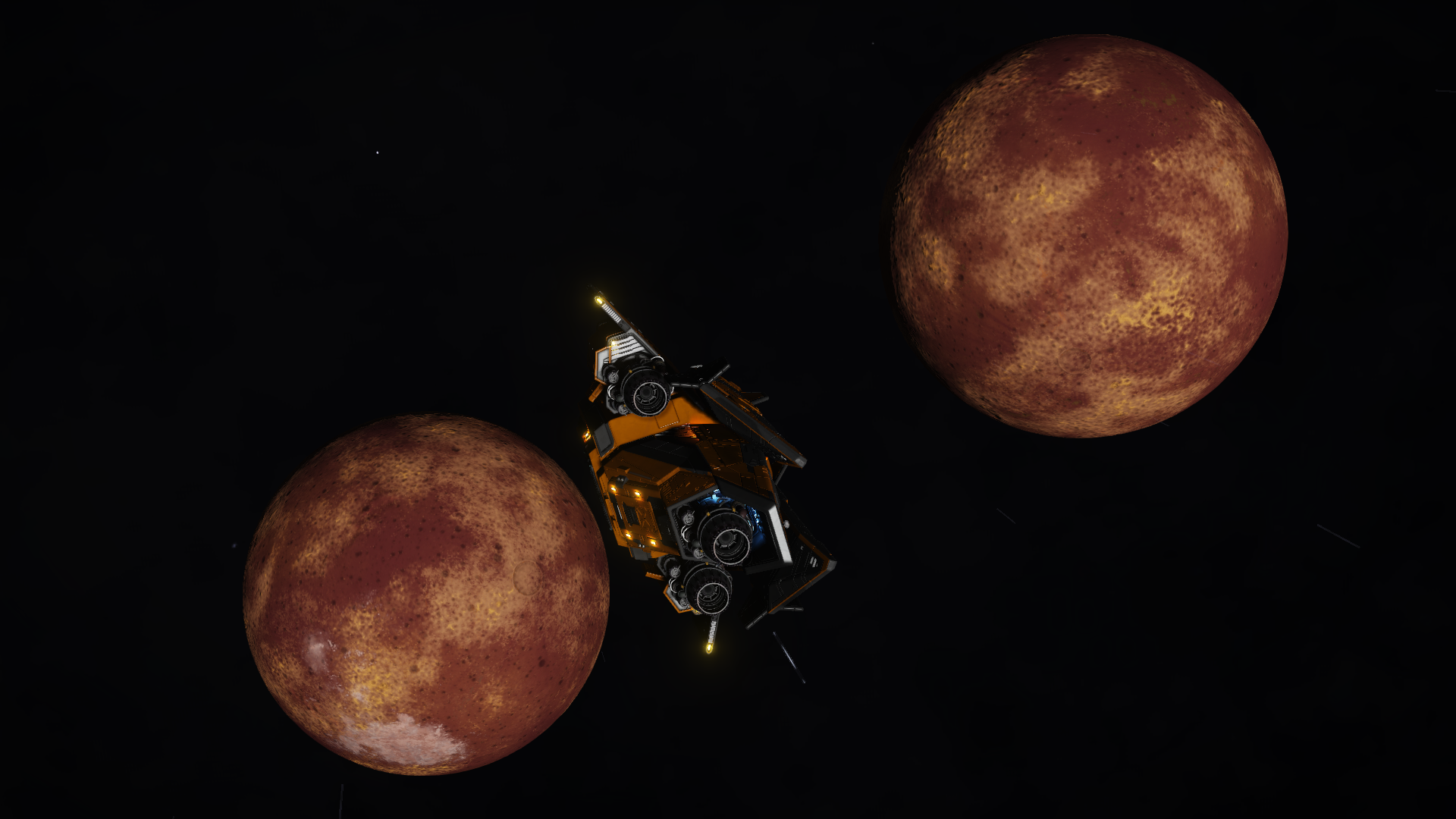 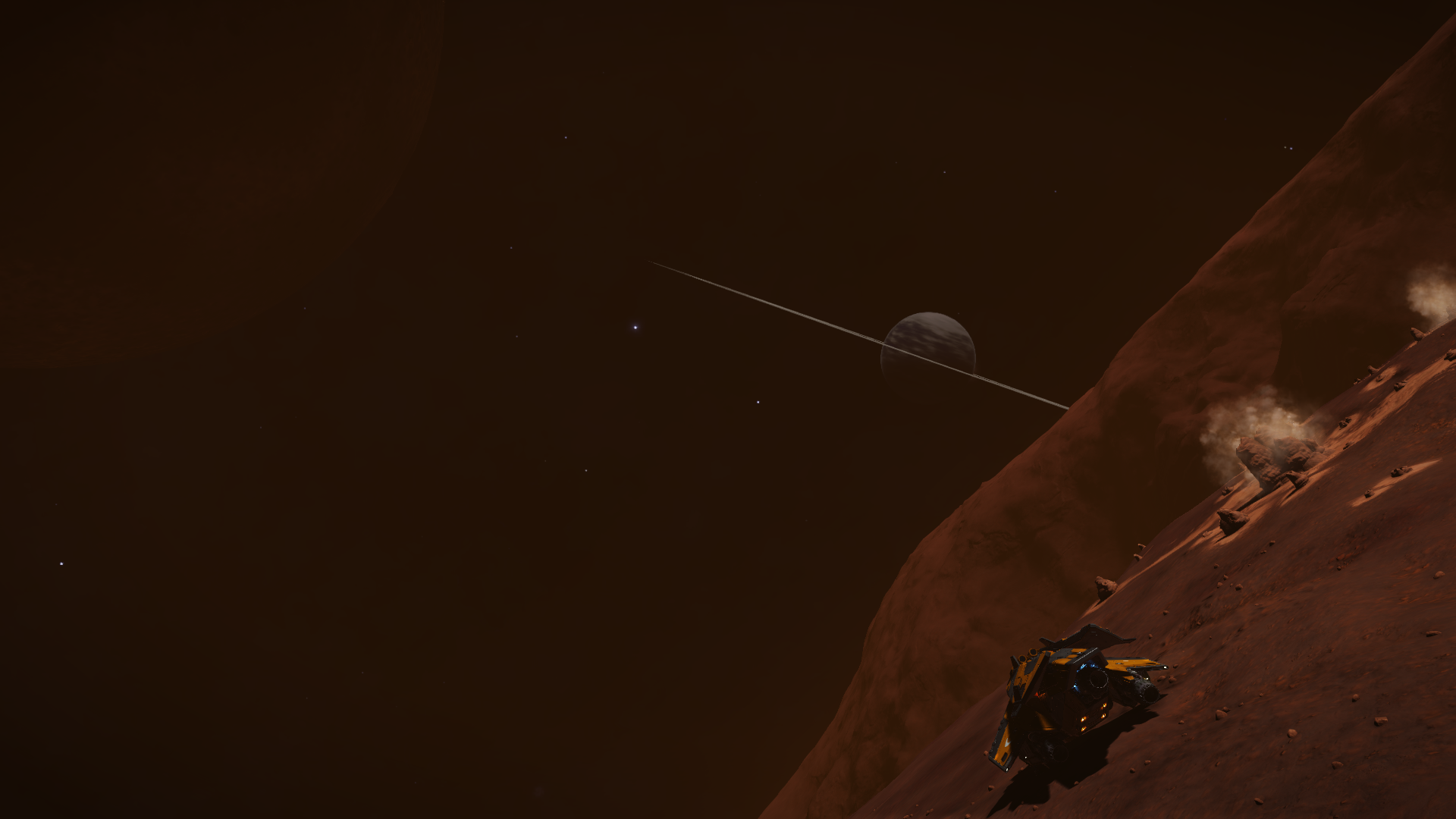 I'm now heading towards the western meridian. I don't think I can manage to reach out as far as Star One is located, I don't have enough range, but since I'm here I decided to get as close to the edge as possible.

Still a long way to get there though.

Meanwhile I took some pictures of nice ringed planets: there's something fascinating about the rings, after all the images of Saturn back in Sol have always been some of the most iconic ones, with many young amateur astronomers trying to get a glimpse of the rings with backyard telescopes.

Here is a ringed terraformable HMC orbiting a common barycenter with another ringed planet. If one day this planet will be terraformed and colonized the inhabitants will certainly have a very nice view to gaze upon from their backyards....even without telescopes :) 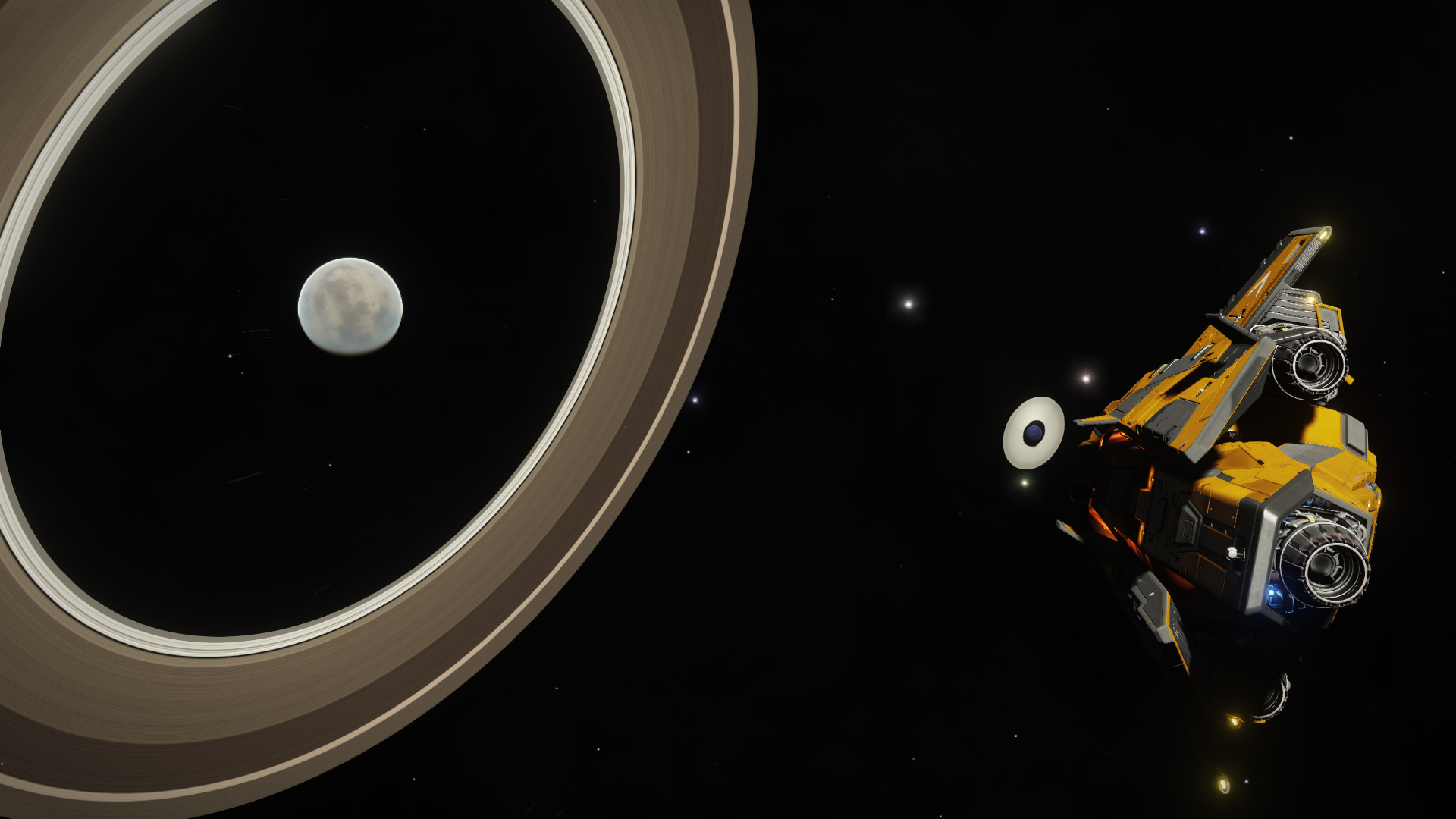 The second one is a ringed icy-body orbiting a ringed gas giant. This one goes into my "missing ring" collection: another ringed moon with a relatively huge gap between its rings. No clues yet on how these structures form without any apparent body responsible for that gap. Definitely nice to view anyway! 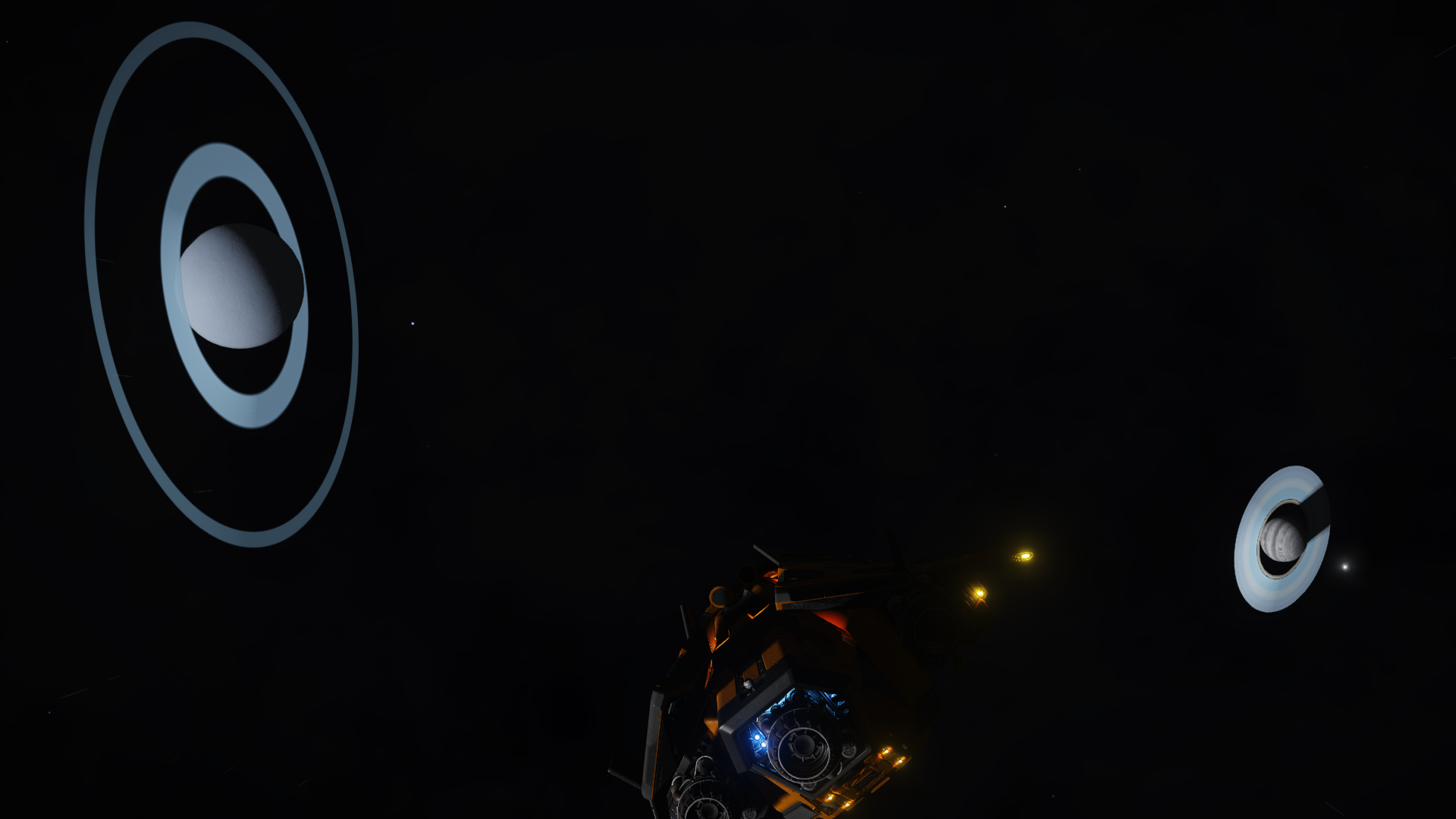 Hey have a look at this: 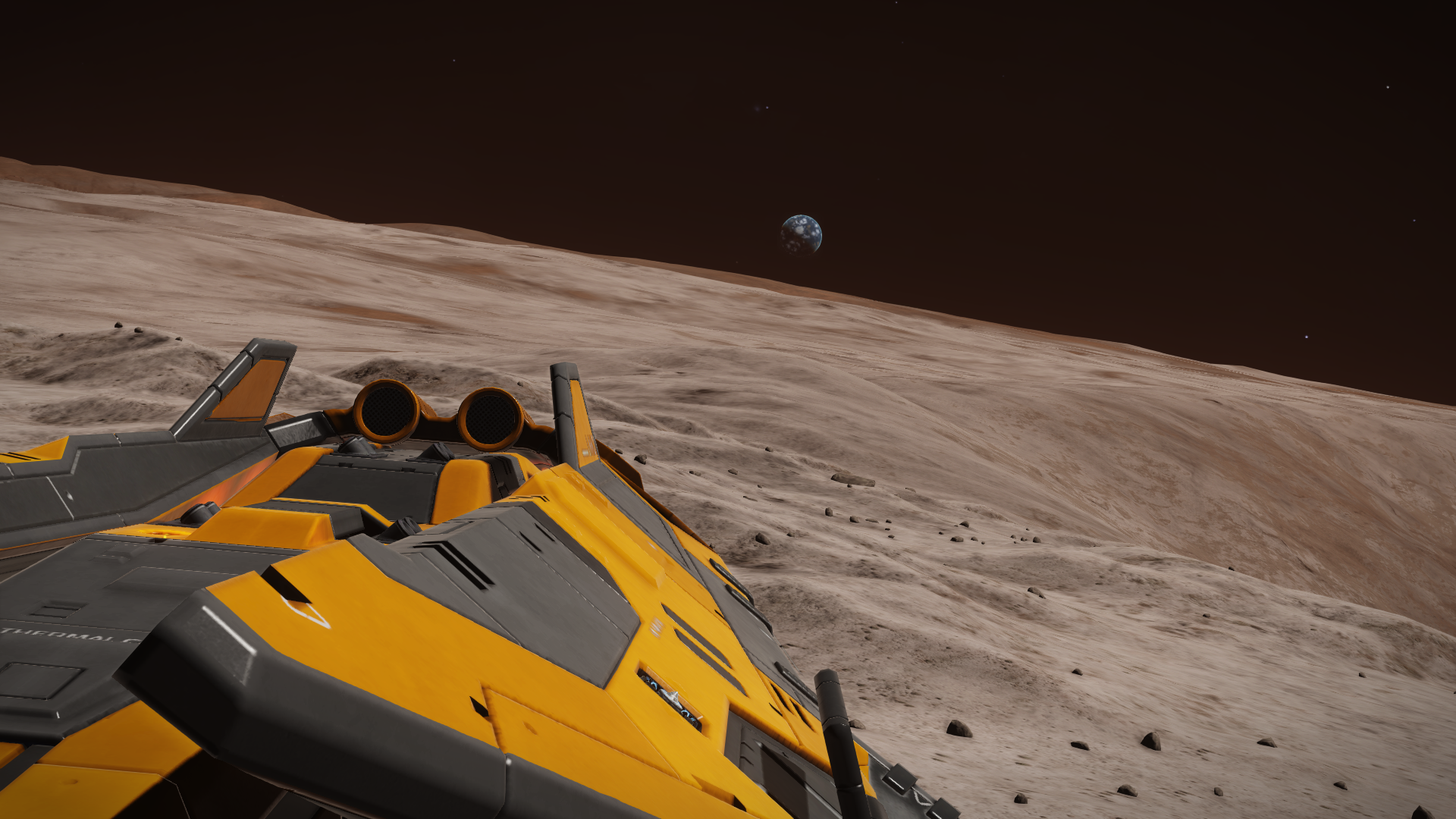 Does it look familiar? Well it should :)

I took this picture from the rocky moon of an Earth-like planet orbiting Graesms II-B d13-1 A. The moon has exactly the same mass and radius of Earth's moon. It also orbits at almost the same distance, about 400.000Km.

The planet is a bit smaller than Earth, with only 40% of its mass and 60% of its radius, but still this picture reminds me a lot of the view of humanity's home planet from its moon.

Thinking that I'm the first one ever witnessing this, on the edge of our galaxy, thousands of light-years away from home is something incredible. We do not even know if there's intelligent life on this planet, I do not have the technology to investigate. For sure there's no space-faring civilisation. But maybe one day, one of the inhabitants of the planet will reach this moon and lookback to his/her homeplanet, and they'll never know I've been there before them.

Or maybe one day one of their heirs will find this log entry, and what will they do with it? Keep it hidden to avoid breaking their illusion? Or will they make it public? And how will this be received by the population? Sadness, anger, joy?

I'll probably never know, and the chances for this to happen are slim at best...still sometimes I wonder if we are taking away the joy of first-discovery from the indigenous population that might arise in the galaxy....for all we know we could be just the same as them, after all Guardians and Thargoids have been travelling the galaxy longer before we could even only imagine it. Maybe there's a record from some ancient Guardian explorer showing pictures of a dinosaur populated Earth from our Moon, making the Apollo shots just a copy of something that already existed.

Space is big....time is even bigger...it's difficult for us humans to wrap our mind around these concepts, we are too focused on the here and now of our short existences....and maybe it's for the best.