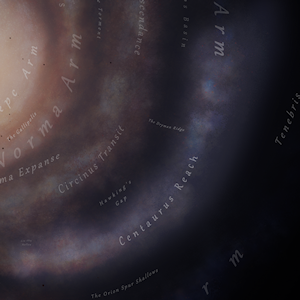 An immense region, more than 35.000 LYs in length, stretching from the Scutum-Sagittarii Conflux until the most eastern sectors of the Sagittarius-Carina arm.

When viewed from inhabited space, the region is located almost entirely within the wide Centaurus constellation.

Many beautiful planetary nebulae are located within the Centaurus Reach, but they thin out the further one progresses along the arm. Located roughly two thirds along the Reach, the Eock Prou nebula marks the end of nebulae entirely for the remainder of the Sagittarius-Carina arm.

This lack of nebulae might be the reason the furthest parts of the Centaurus Reach remained largely untravelled by all but a few explorers until the launch of the Sagittarius-Carina Mission in August 3301. Since then a number of highly interesting POIs have been discovered within the Reach, including the 'Three Worlds Nebula' and the five black holes and singular planet of 'Erebus 34'.