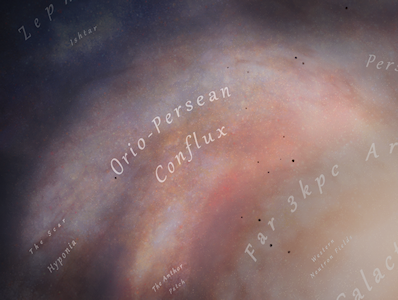 The conflux is a vast area characterised by turbulences in the interstellar medium due to the gravitational interactions between the Orion-Cygnus and Perseus arms as they come together - or rather, as they branch apart.

The name "conflux" is thus technically a misnomer, as the galactic spiral arms are not like rivers flowing together, but rather caused by density waves generated by the galactic bar at the core and propagating outwards. Despite this, the name remains popular among deep-space explorers as it invokes the image of a turbulence prone area. The turbulences are much too small to be noticeable during ordinary spaceflight, but on an cosmological timescale they have profound effects on star formation in the area. One prominent example of this are the Segnao Starburst clusters - these may be found in the northern parts of the Conflux.

In the Conflux is also found the blue supergiant 13 Mu Sagittarii, which has long drawn the attention of individual explorers as well as those taking part in the Sagittarius-Carina Mission.