733 ships passed through Antares space, including 2 ships in the last 7 days.

0 ship passed through Antares space in the last 24 hours.

A star known from antiquity, Antares is the fifteenth-brightest star in the Earth's night sky, and the brightest star in the constellation of Scorpius. Distinctly reddish when viewed with the naked eye, Antares is a slow irregular variable star that ranges in brightness from apparent magnitude +0.6 to +1.6. Often referred to as "the heart of the scorpion", Antares is flanked by Sigma and Tau Scorpii in the centre of the constellation. The traditional name Antares derives from the Ancient Greek Ἀντάρης, meaning "equal to-Ares" ("equal to-Mars"), due to the similarity of its reddish hue to the appearance of the planet Mars.

Antares is a red supergiant and one of the larger known stars. 20th century astronomers measured it as 890 ± 150 solar radii. The current observed size as of 3303 was 380 solar radii, likely due to Antares' variability. The star is expected to explode as a supernova in the next few hundred thousand years. Despite the large radius, Antares only has 0.4 solar masses, and this large difference between mass and size is typical for red supergiants which are burning helium.

Antares has a typical B-class companion star, which is orbited by a collection of dwarf stars, gas giants and small rocky bodies. Antares proper has three hot high-metal worlds in orbit. The distance between the two stars is approx. 195,000 light-seconds. Due to frame-shift drive technology locking onto the most massive body in a system, visitors to Antares will find themselves at Antares B, and need to fly the distance to Antares A. This trip takes approximately 10 minutes at maximum frame-shift drive speed. 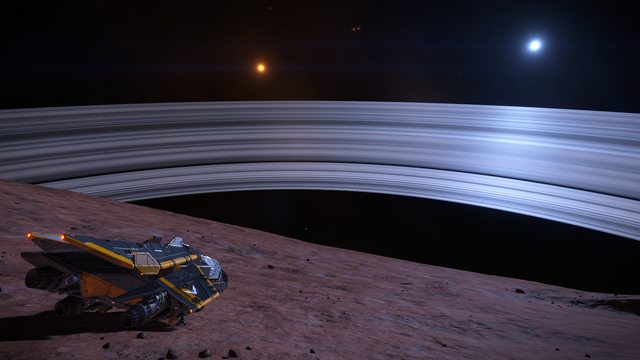