It was named by the Galactic Mapping Project with the name of: The Coalsack & Chameleon Nebulae

Two frontier border 'dark' nebulae situated a mere 600 LYs from Sol. Neither reflect visible light and the Chameleon is devoid of stars. Due to their close proximity to Frontier borders, both nebulae are often cited as one of the first places to visit for new explorers fresh out of the pilots federation academy.

On December 20th 3300 the Coalsack was visited by a large group of explorers from the First Great Expedition, making this the very first group exploration effort since the general restrictions to deep space travel were lifted by the Pilots Federation in december 3300. The recommended minimum jump range to take part was a mere 12 LY - to account for the limited technology available (and affordable) for the many new pilots graduating at the time (source).

The Coalsack Dark Nebula (or simply the Coalsack) is the most prominent dark nebula in the sky on Earth, easily visible to the naked eye as a dark patch silhouetted against the southern Milky Way. As such it has played a prominent role in navigation and mythology in the southern hemisphere on pre-spaceflight Earth. The Coalsack was important in Australian Aboriginal astronomy, and formed the head of the Emu in the sky. In Inca astronomy this nebula was called Yutu meaning a partridge-like southern bird or Tinamou. The first reported observation of the Coalsack by european explorers venturing south was by Vicente Yáñez Pinzón in 1499. It was named “il Canopo fosco” (the dark Canopus) by Amerigo Vespucci and was also called “Macula Magellani” (Magellan's Spot) or “Black Magellanic Cloud” in opposition to the Magellanic Clouds. 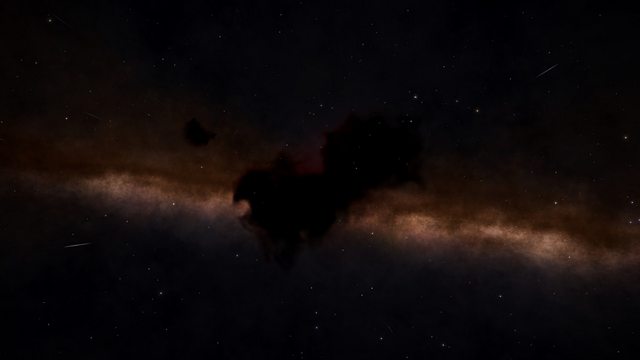