It was named by the Galactic Mapping Project with the name of: Hind Mine / Hind Nebula (T Tauri)

4423 ships passed through T Tauri space, including 14 ships in the last 7 days.

4 ships passed through T Tauri space in the last 24 hours.

1 ships were destroyed in this system in the last 24 hours.
Minor factions
Galactic Mapping Project entry

The Hind Mine asteroid base was constructed in 3303 by Taurus Mining Ventures. It is in the T Tauri system - orbiting the star that illuminates the Hind's Variable Nebula.

This base was used as a supply depot for the Premonition Allied Coordination in the hours leading up to their mission to defend Salomé. 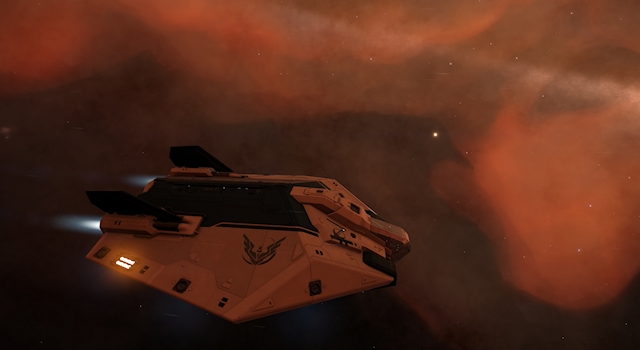 NGC 1555, sometimes known as Hind's Nebula, is a variable nebula, illuminated by the star T Tauri, located in the constellation Taurus. The nebula was discovered on October 11, 1852 by John Russell Hind. It is a yellowish/orange nebula and when viewed from within the T Tauri system, part of the nebula resembles the shape of a bird in flight (large image).

T Tauri itself is a very young pre-main-sequence star in the process of contracting to the main sequence. It is the prototype of the T Tauri stars. These young stars have surface temperatures similar to those of main-sequence stars of the same mass, but they are significantly more luminous because their radii are larger. Their central temperatures are too low for hydrogen fusion. Instead, they are powered by gravitational energy released as the stars contract, while moving towards the main sequence, which they reach after about 100 million years. [Note: In Elite Dangerous T-Tauri is depicted as a G-class main sequence star. It is unkown why this is so.] (Source)

The Hind Nebula was the destination of one of the early research voyages organized by the First Great Expedition - making it one of the first nebulae to be surveyed by group exploration (source).