This system was visited for the first time on EDSM by Alot.

It was named by the Galactic Mapping Project with the name of: IC 2149

IC 2149 is a planetary nebula in the constellation of Auriga. It was discovered by Williamina Fleming in 1906.

This nebula has a typical red-green appearance, but the similarities to other planetary nebula end there. The host system for the nebula is composed of a high-mass O-class star in binary orbit with a Herbig Ae/Be star (see photo), and this pair orbited by three T-Tauri stars plus an F-class and B-class star. The system age of 184 million years indicates that these are all of fairly recent stellar evolution.

This combination of objects is unusual, as protostars like T-Tauri and Herbig Ae/Be are usually created by the collapse of molecular clouds of gas; yet the surrounding nebula seems to indicate that mass is being expelled from the system.

The O-type star is unusually massive (97.6 solar masses) and hot (101,092 kelvin), placing it clearly on a track to pass through phases of being a Wolf-Rayet star before exploding as a type IIn supernova. The nebula can be presumed to be gas expelled from the O-type star's solar wind. The Herbig star is far cooler but has high mass (46.3 solar masses) in a highly compact 0.5 solar radii. Previous models assumed that protostars of this mass collapsed so rapidly that they were never seen, going straight to massive main sequence stars in a few thousand years.

Based on all these factors, we have to conclude that a very large molecular gas cloud was compressed very rapidly, and that we see these stars in protostar stage and just passed out of protostar stage into main sequence. The mass is rapidly being expelled back into space to form the nebula we see. The Herbig star should shortly become an O-type star and also expel mass. Both of these stars will supernova soon. The mystery here lies in what caused a cloud of 150+ solar masses to compress so quickly. One possibility is the passage through the cloud of a rapidly moving black hole.

This nebula is difficult to reach, requiring a long-ranged ship, neutron star boosts, and/or FSD injection. 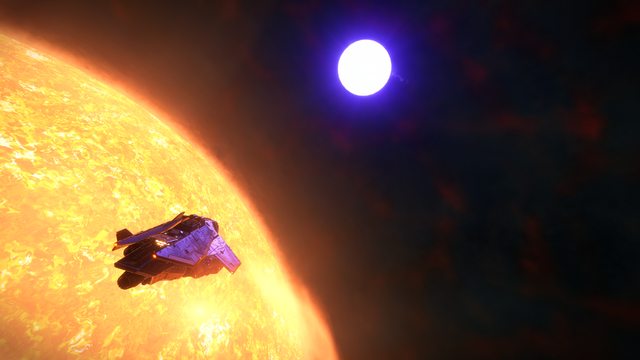