It was named by the Galactic Mapping Project with the name of: Guardian ruins - Regor eastern limit

This system approximately shows the most eastern location of the many Guardian ruins discovered near the Regor sector. The system itself contains three of these ancient sites, all of them located on the same moon. 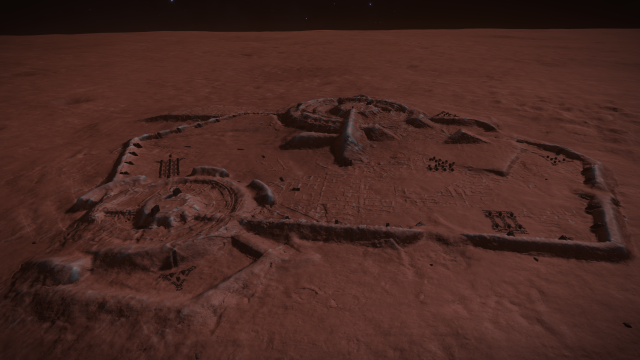 "Whole cities were protected by huge shields..." says a decoded message from the set of pillars in the north-west section of these ruins. This place invites you to head there as the large nose-shaped hill seems to ask you to come closer. But if this is true, and our technology is indeed inferior to the guardians, the next message should intrigue us even more. It changes subject: "Created creatures expressly for use in battle". Biological manipulation ?! It seems their affinity for genetics have given them a path we do not walk on. Towards the south-west is another elevated area which unveils the weakness of that path, it's obelisk returns a coded entry: "Sadly.. biological weapons were of little use against the AIs". Strength indeed stays a paradox for us all, guardians or humans: one's biggest strength can become one's largest weakness.