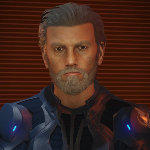 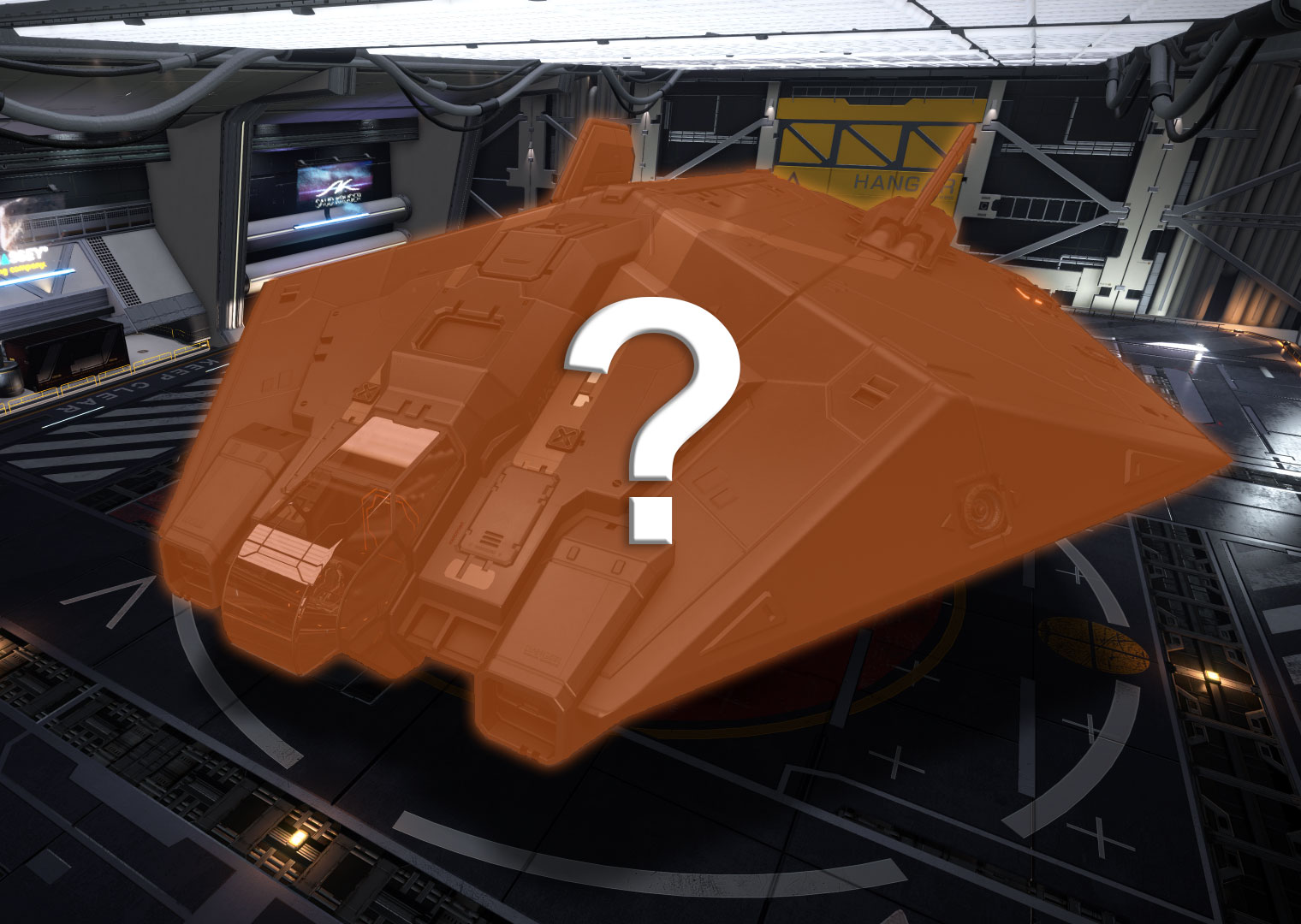 The Journey to a Distant Star - Day Five

Well, I hadn't been making much progress towards the [Distant Star] for quite a while. I have selected the half way mark pit stop and I'm going to make progress towards that. I'm still currently quite close to the Bubble - roughly 2000 light years out - and honestly, I think I need to move a bit farther away. 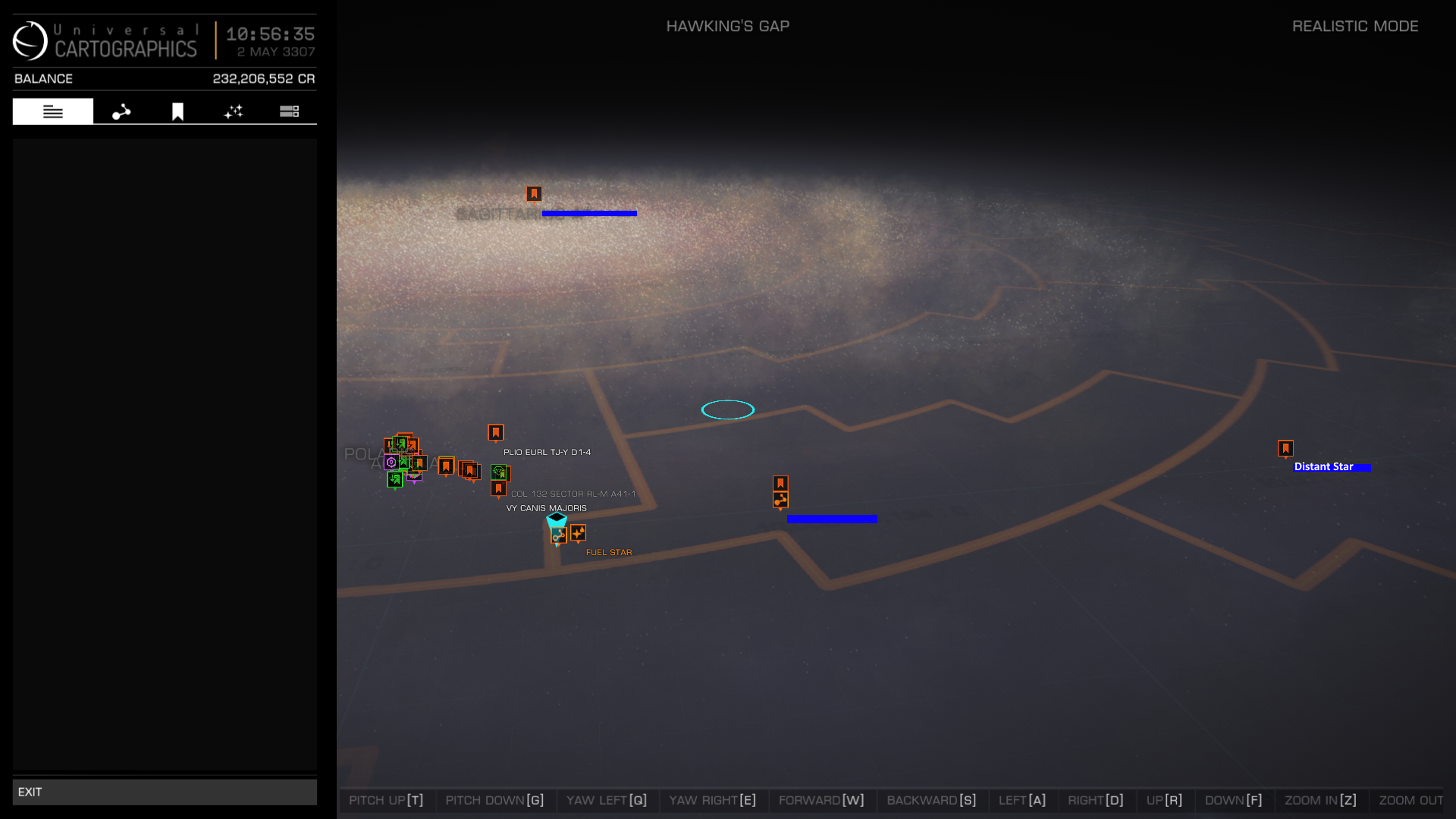 It's around 70 jumps away so I obviously won't make it there in a day and I'll make sure to stop off at anything interesting on the way. Hopefully there's a Fleet Carrier out there so I can sell any cartographic data.

57 jumps in so far and I've already hopped between two neutron/white dwarfs. I should have taken a screenshot but it's too late now. I see one up on the galaxy map nearer the end so I might grab one of that.

I also just realised that I've entered the [Sanguineous Rim]. That was quick!

Today had been somewhat boring exploration wise so far but I did manage to find a canyon racing planet which looked nice. Whether it would function well is beyond my knowledge but if somebody wants to find out, the body is [Oochosy IJ-W b20-0 AB 1 b]. 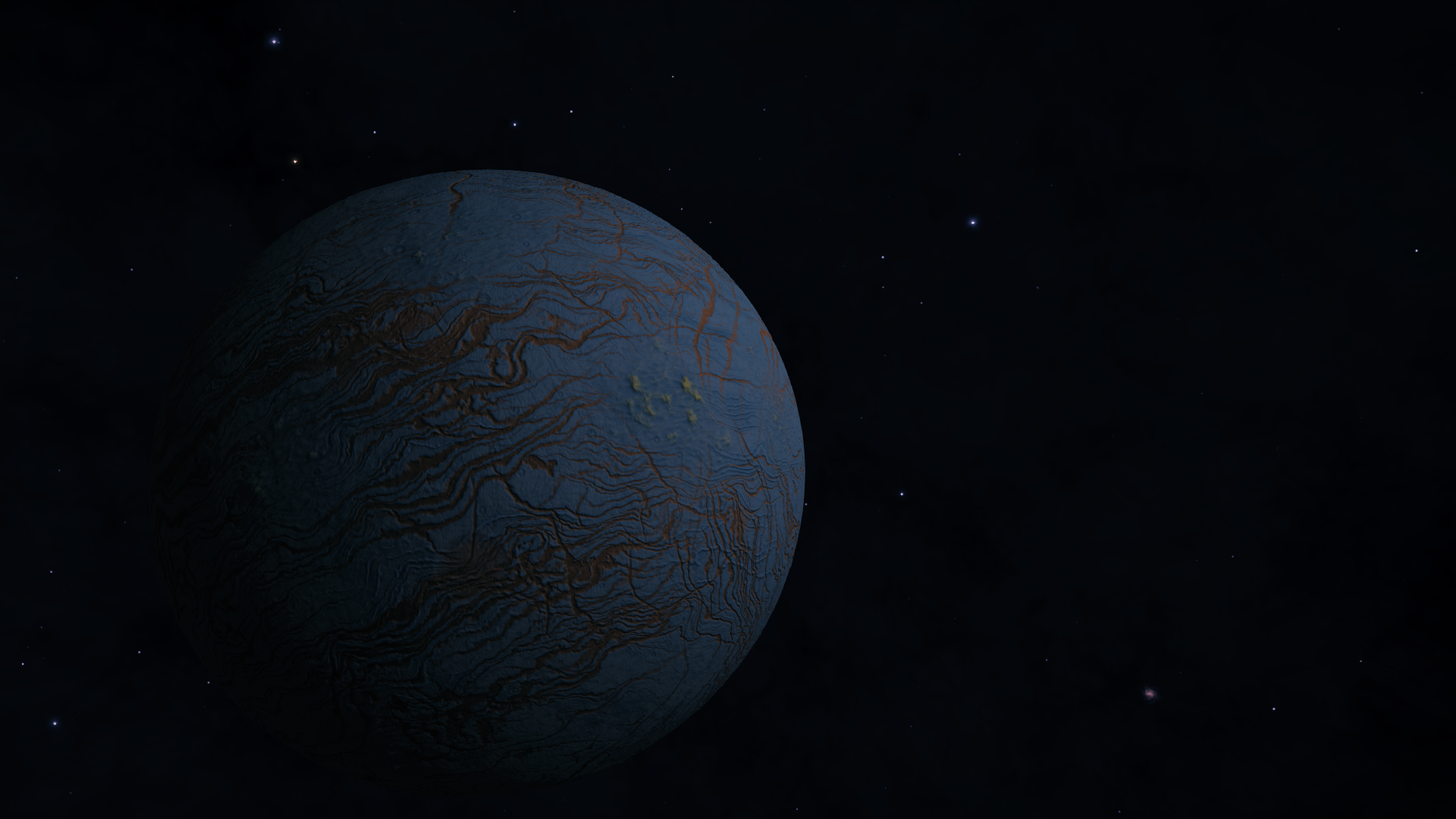 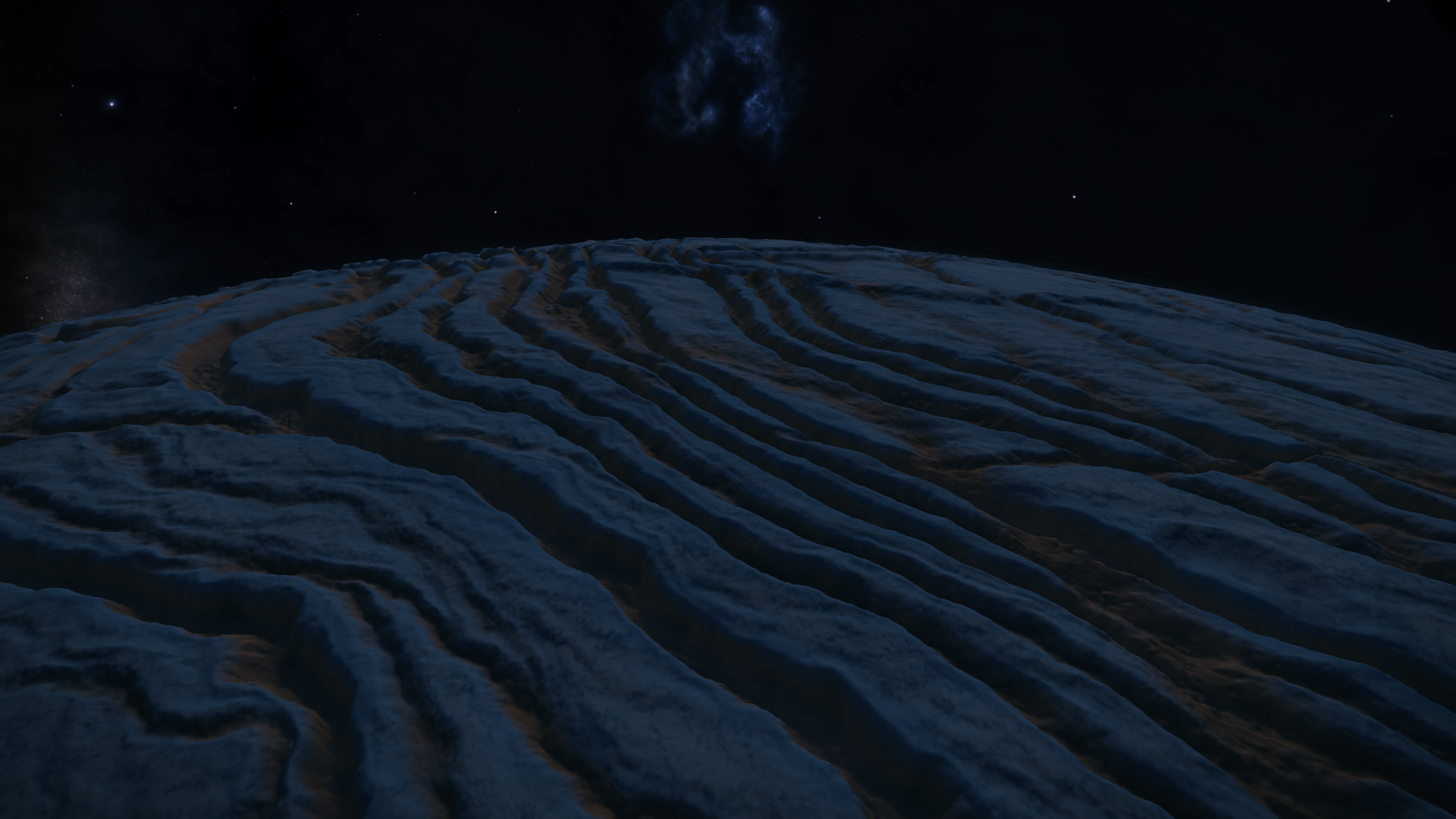 I'm back, I was busy messing around with these new Titans I found. Odd machines. Anyway, the 5-star system obviously had been seen before.

After I visited there, the other CMDR was ready to visit [VY Canis Majoris] so we headed there. It was interesting but, unlike [Betelgeuse], didn't have anywhere to land which was disappointing. 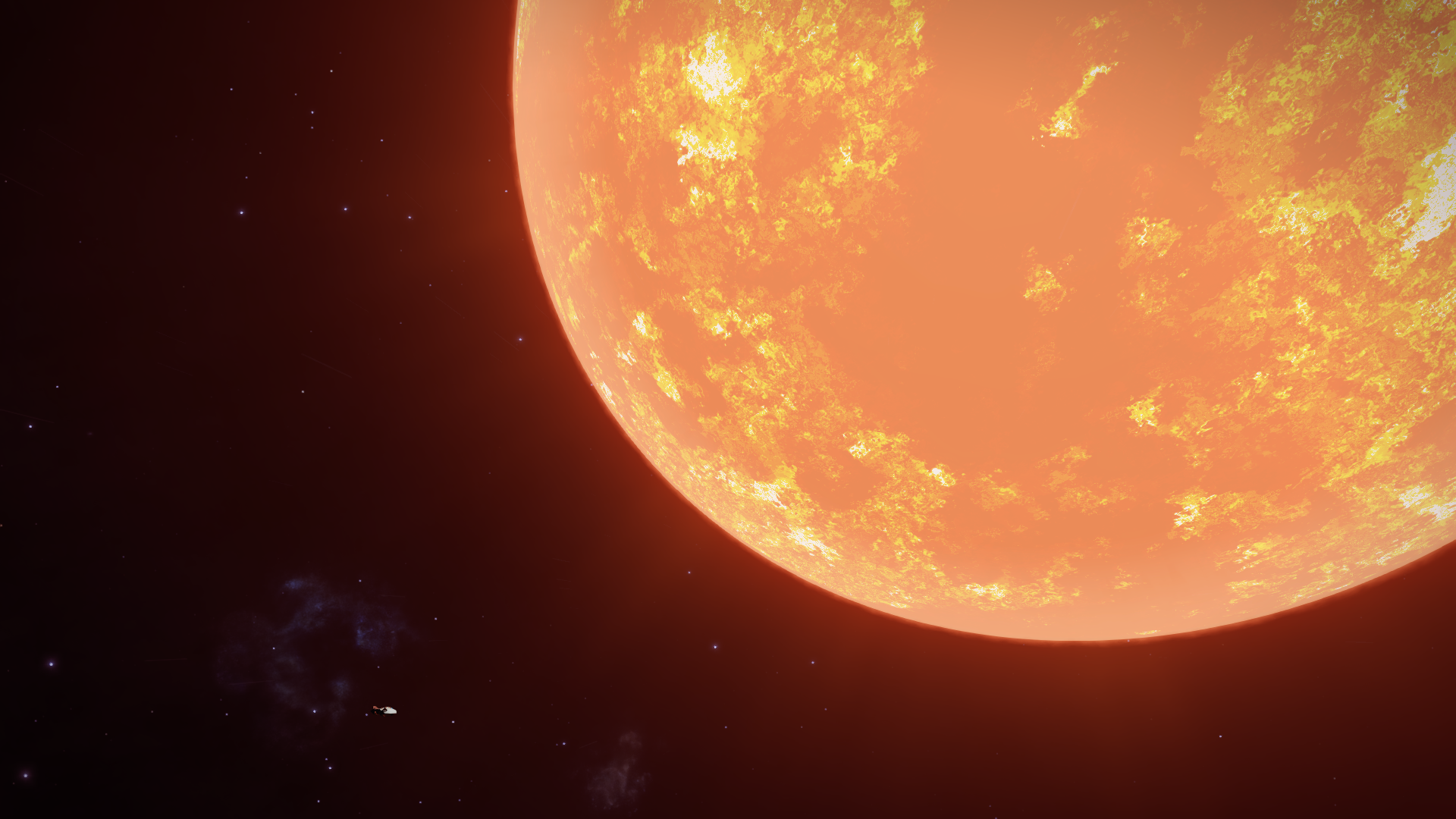 Nothing notably interesting has happened outside of that. I've found a lot of unexplored systems and currently I'm looking for an explored blue star system. O-type, B-type, Wolf-Rayet. Any of those would be nice.

On a route to a low down blue star I found this funky landable planet. It didn't look too interesting on the surface - looks a lot better here. 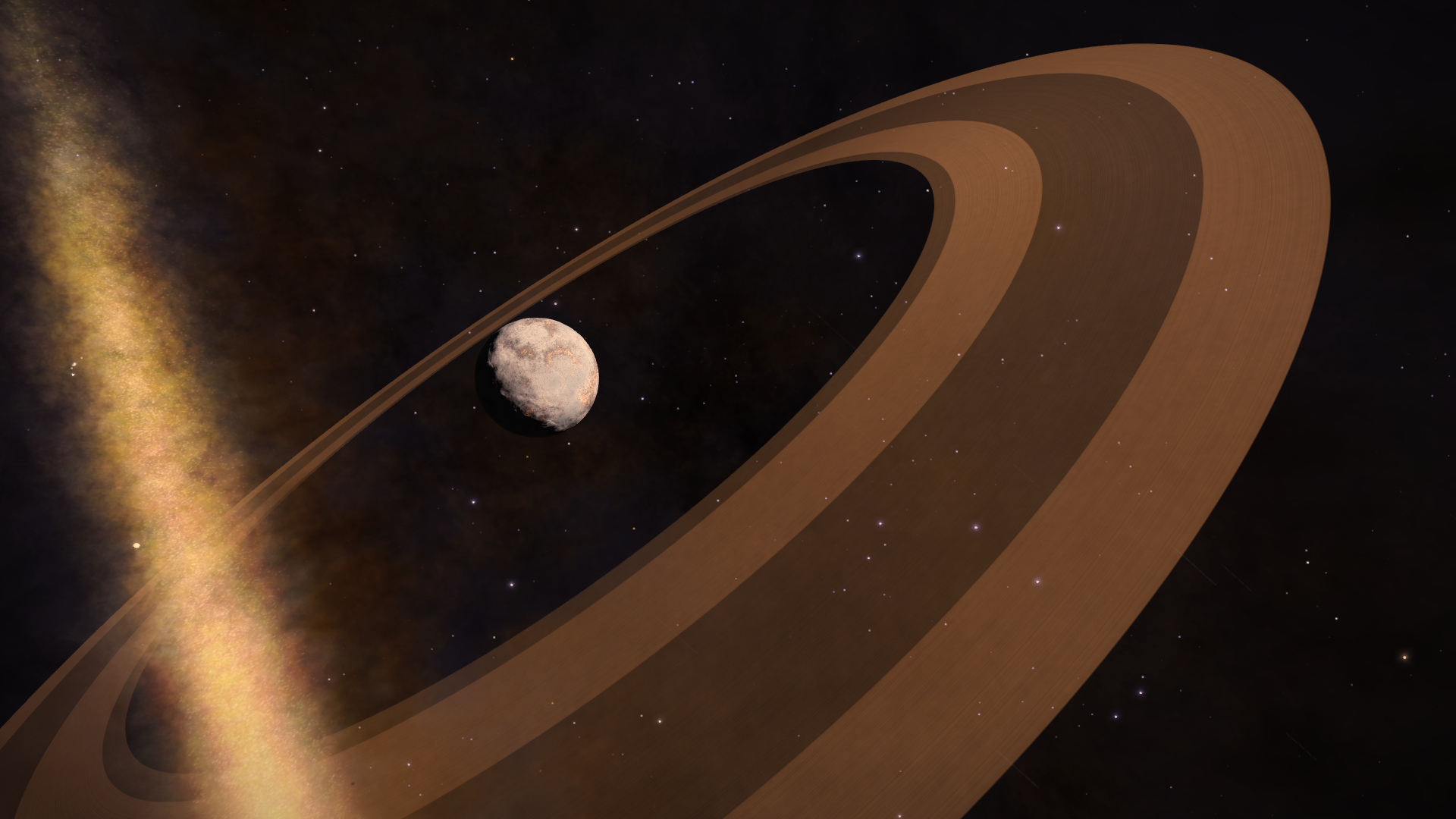 The next jump over I found a system with a measly 6 bodies. One of those was an undiscovered earth like - my first one! Really happy with this find. You can have a decent screenshot of it. 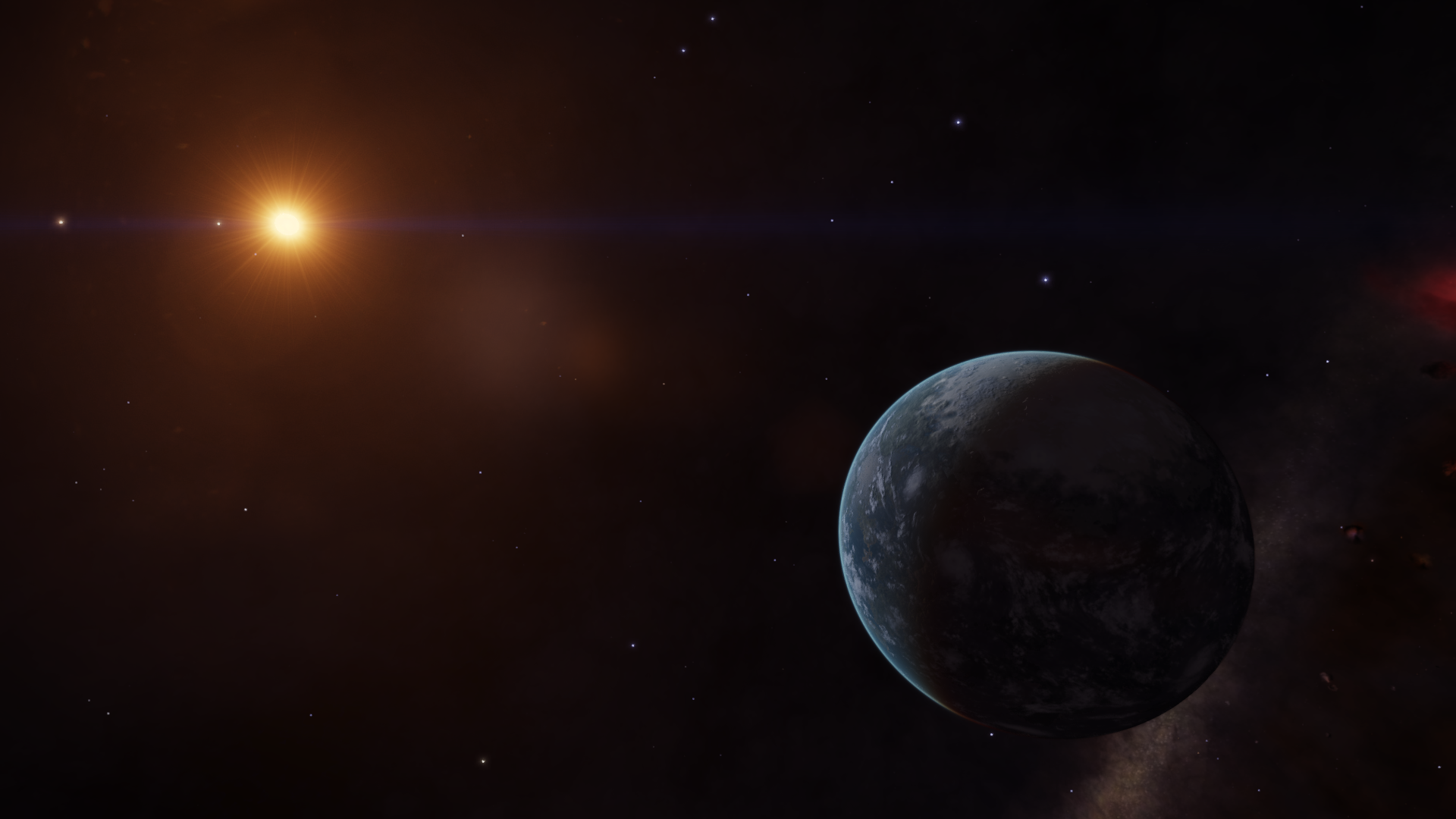 A jump or two after that I actually found an undiscovered B-type star with a whopping 43 bodies. A load of them are ringed gas giants with a very funky pink looking one in the middle. I'll check it out and post a picture of it up close. 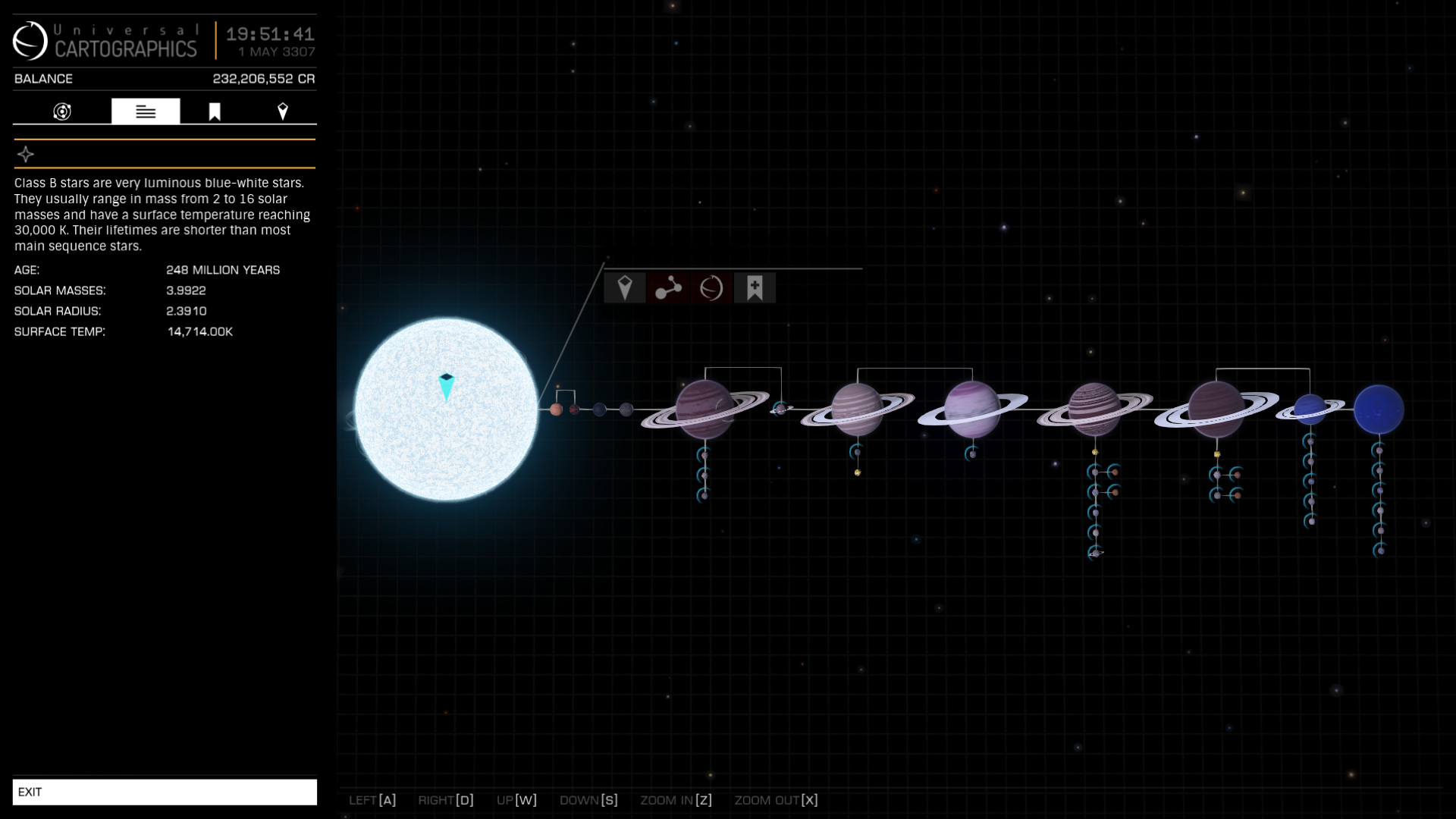 I got over to the pink gas giant but it was a bit less pink than the system map showed - still looked really nice though! Since it's another interesting discovery I think I'll name this one the [Pink Jawbreaker]. 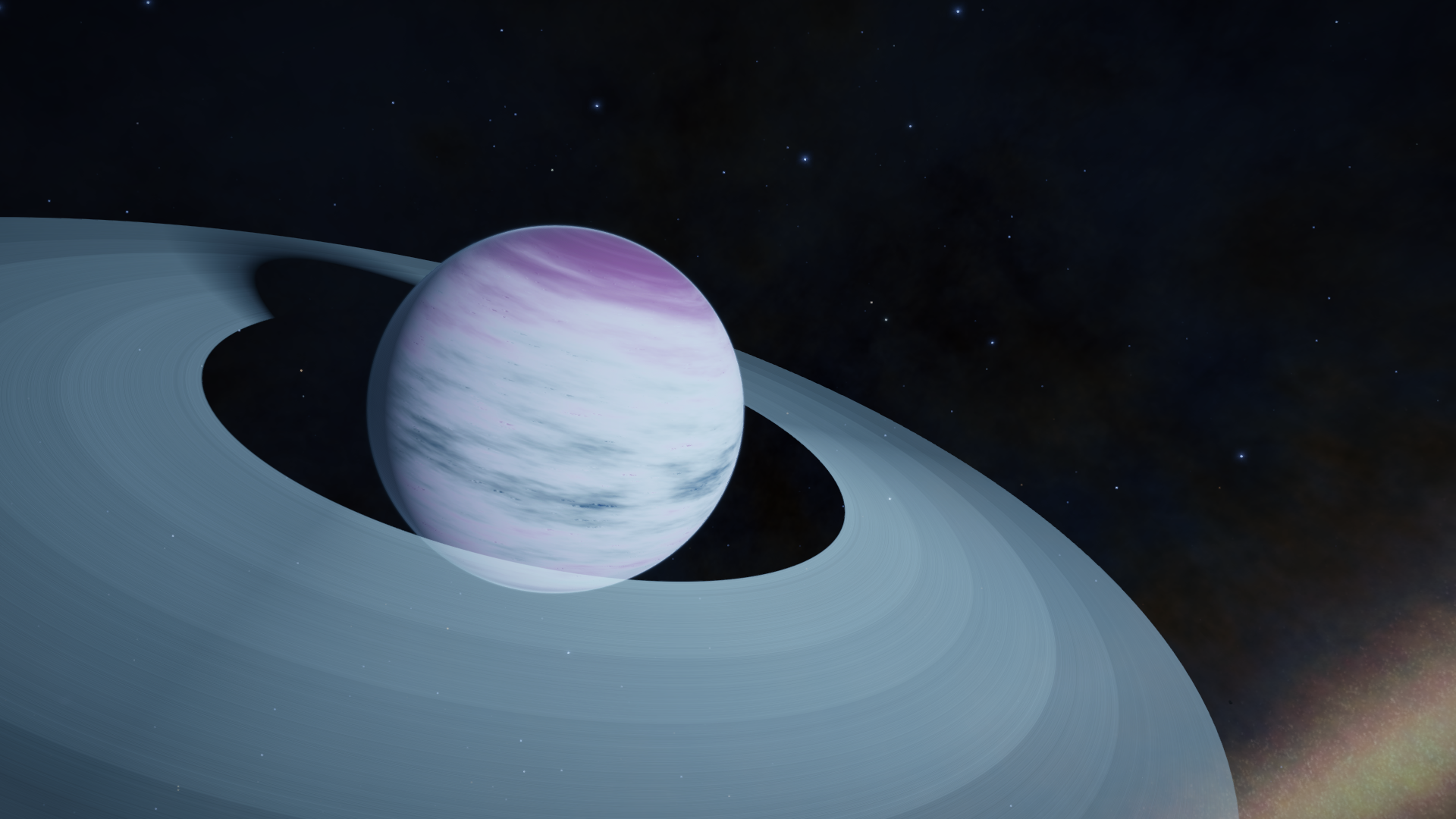 There was also this zebra looking gas giant as well which I've seen before. It's still interesting. 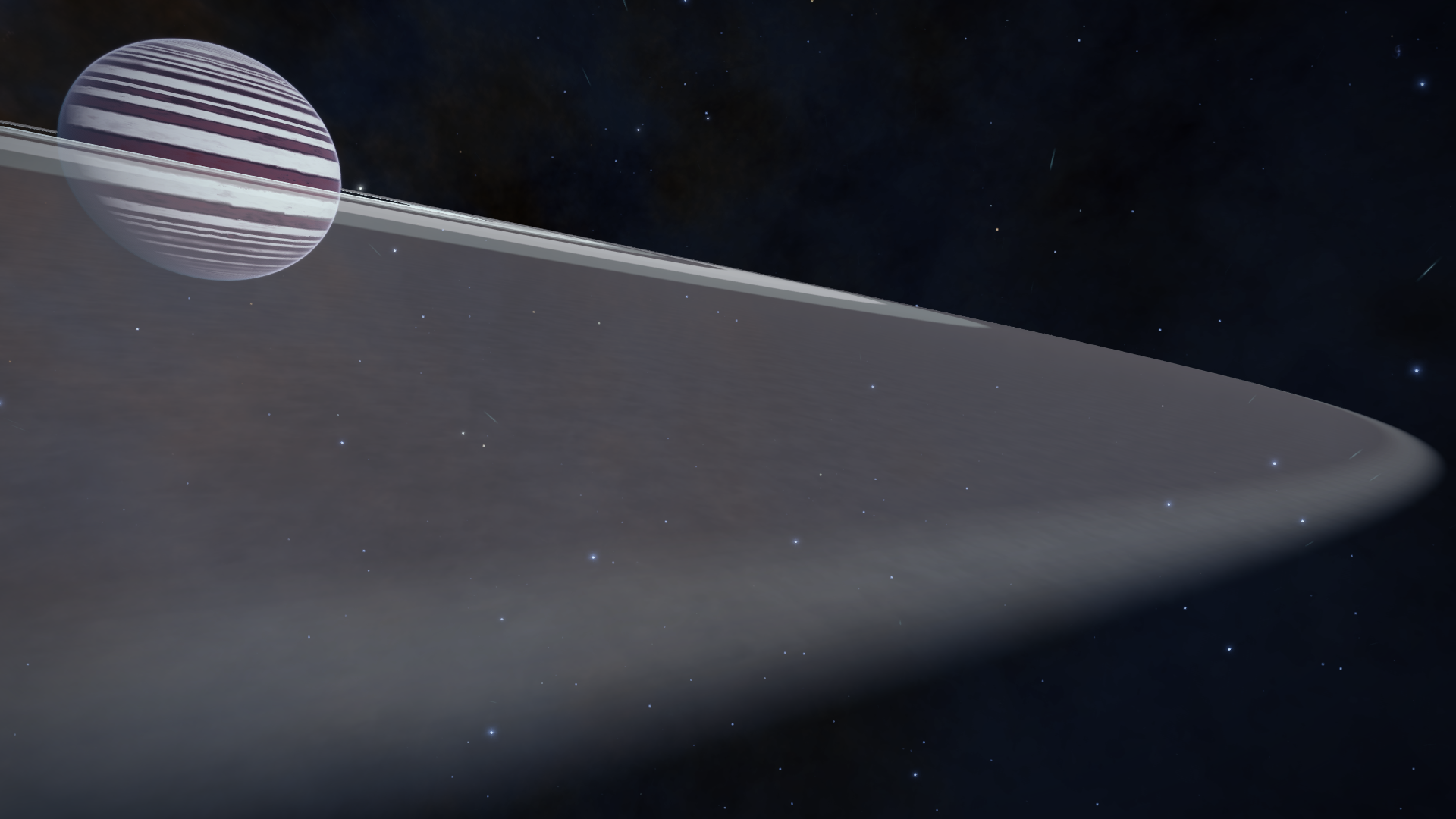 On the final ringed body I found a relatively large Painite overlap which is half decent. Might use it for mining one day - probably not though. 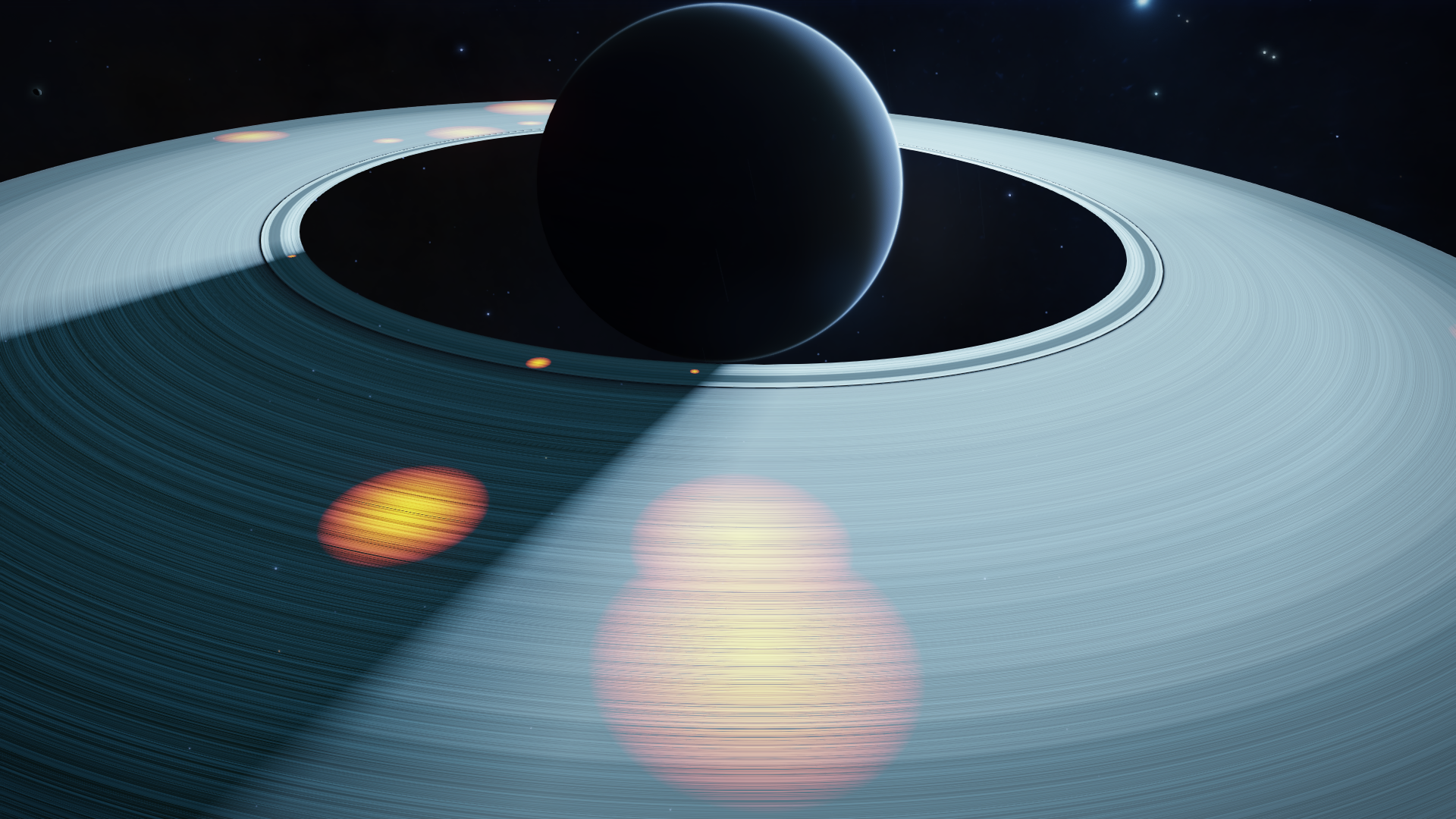 I made a slight mistake last night and completely forgot to detailed surface scan the [Twin Orbitals]. I just now had to make a quick trip back to the [CEAS - Kirkbride fleet carrier] to sell my cartographic data. What would I do without that incredible fleet carrier.

As I headed back to my pit stop bookmark, I took a quick stop at [HIP 38064]. A lovely O type with a tourist beacon for binary planet rings - two ringed planets orbiting close to the O type.

Looks great but I still think my [Twin Orbitals] find is more impressive, they're closer to each other than these. But again, this place does look stellar. 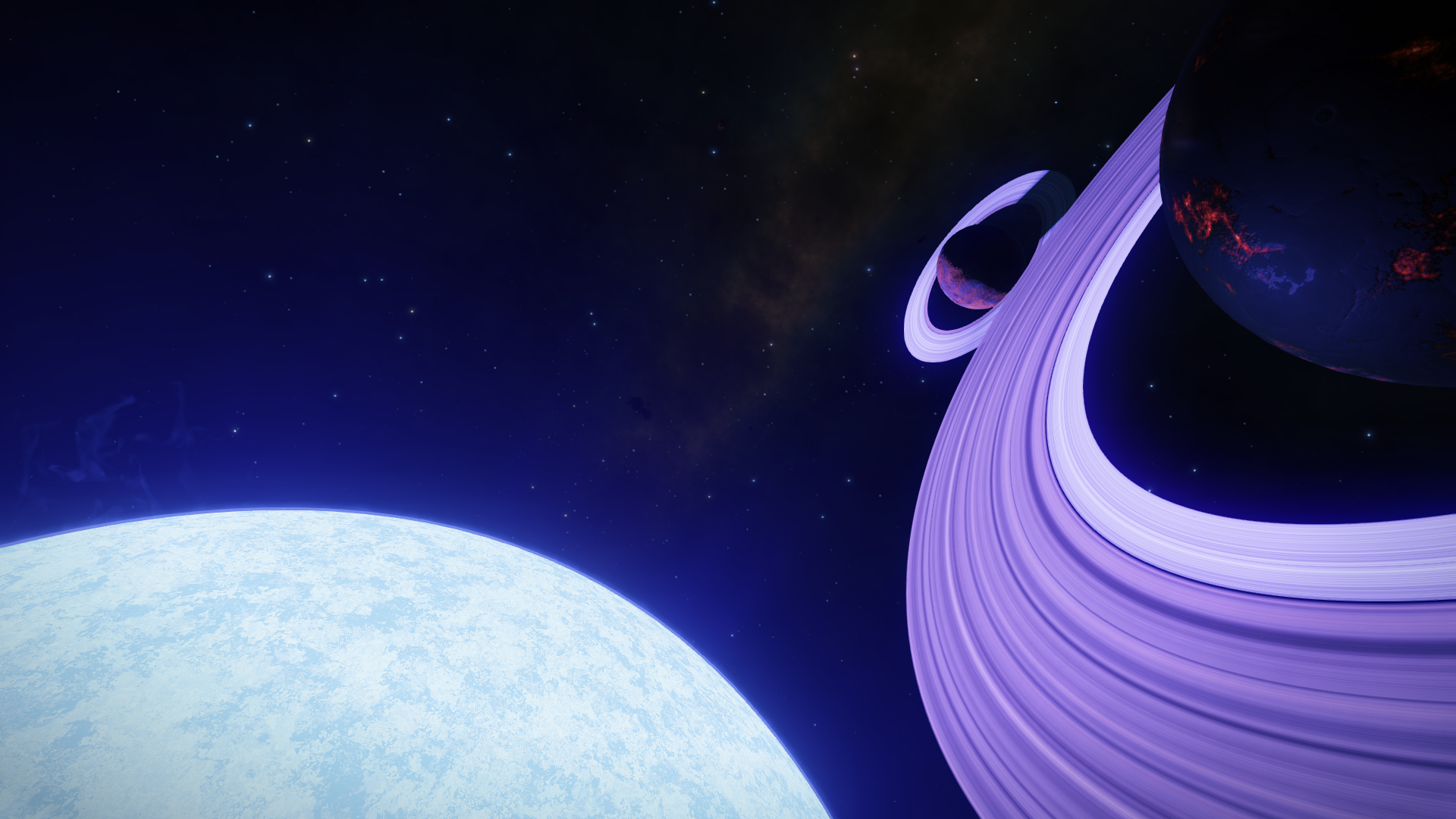 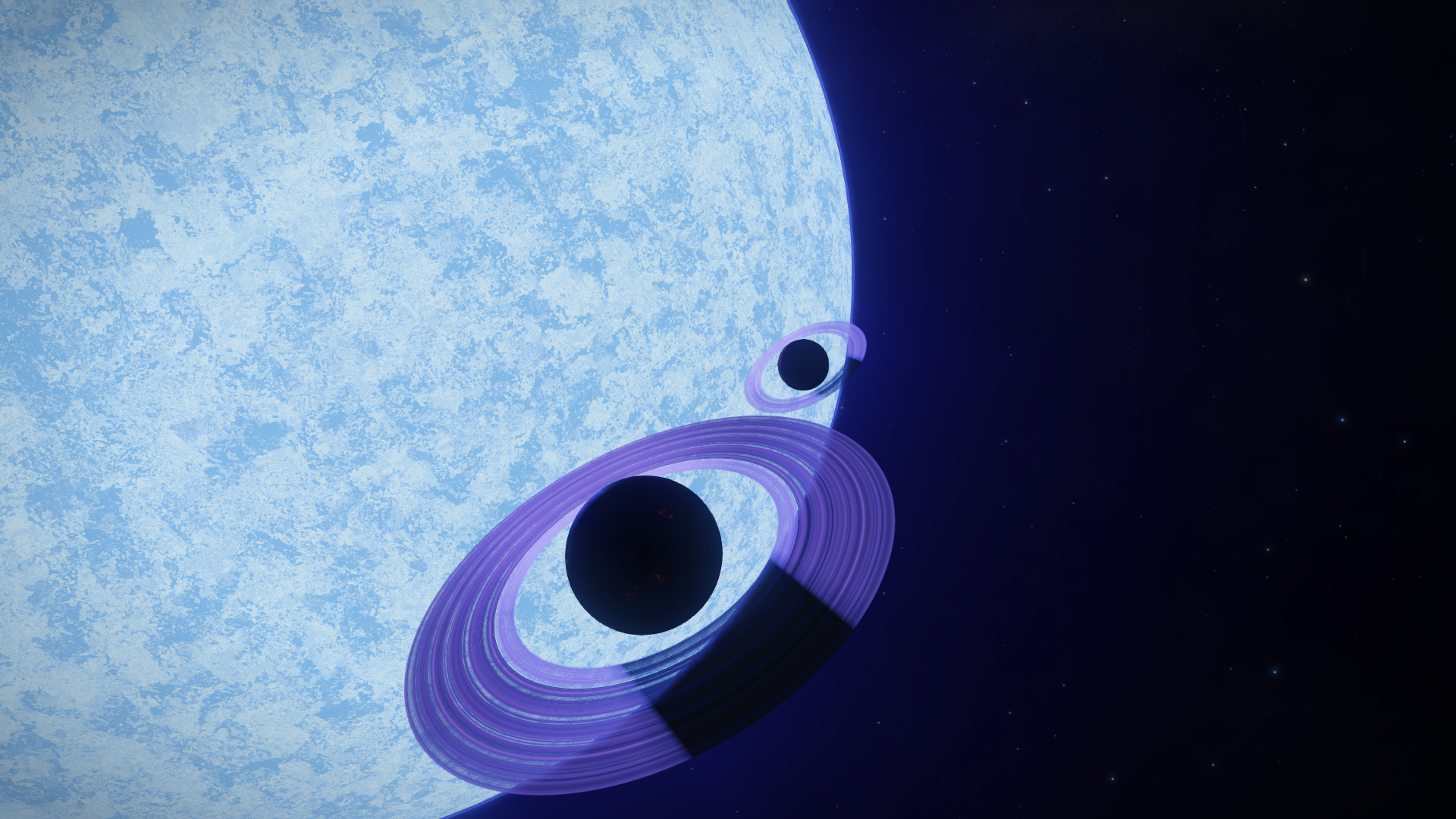 I just hopped into another system, thought it was going to be boring but god was I wrong. [Col 140 Sector BC-J b10-3] has two notable stellar phenomena's real close to each other.

The first was unfortunately just some Rubeum and Flavum metallic crystals which I've already seen countless times before. The second was also disappointing - more Flavum but this time Purpureum instead of Rubeum. If you're after three of the metallic crystal times you should pop on over, otherwise don't bother. 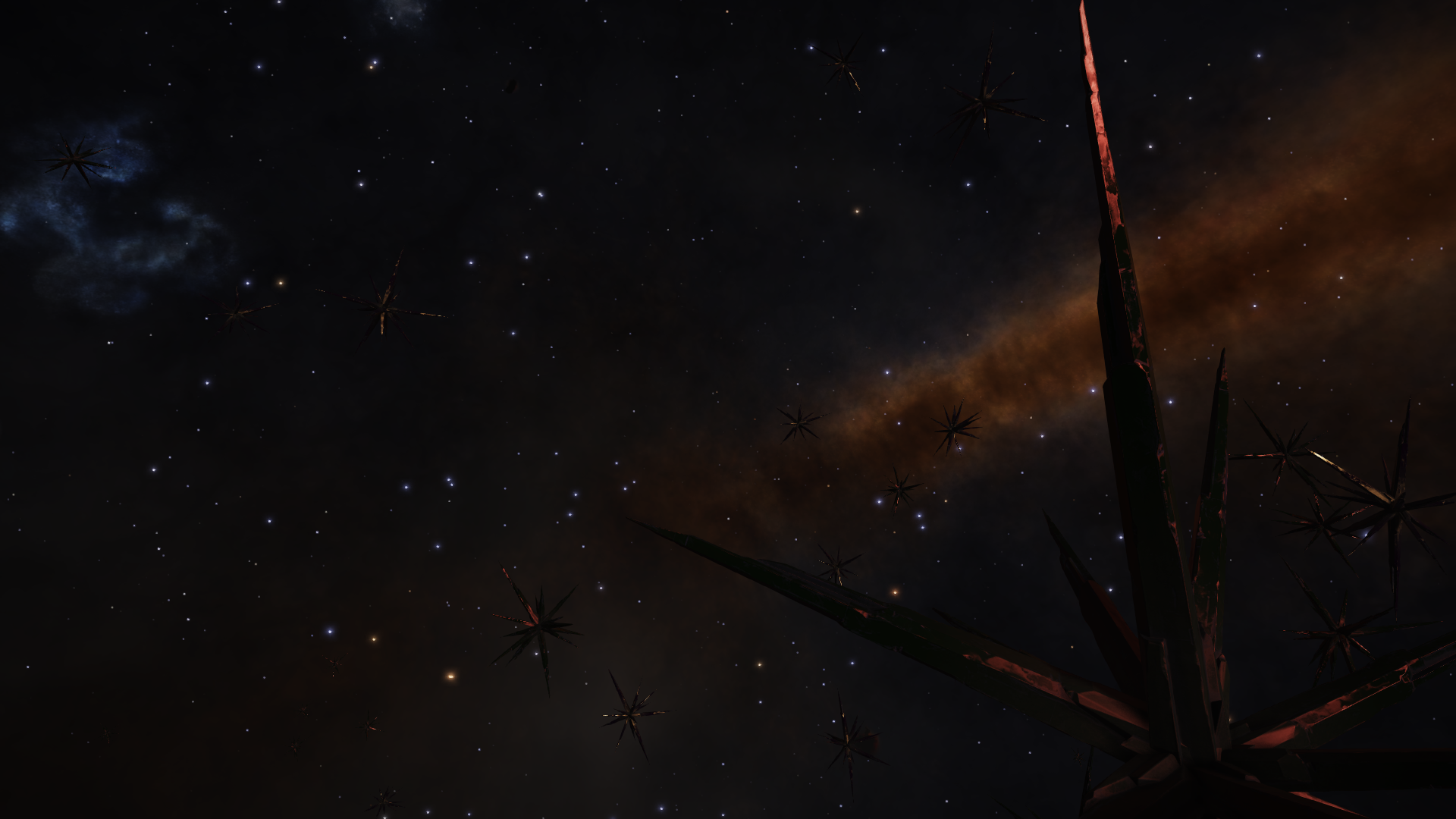 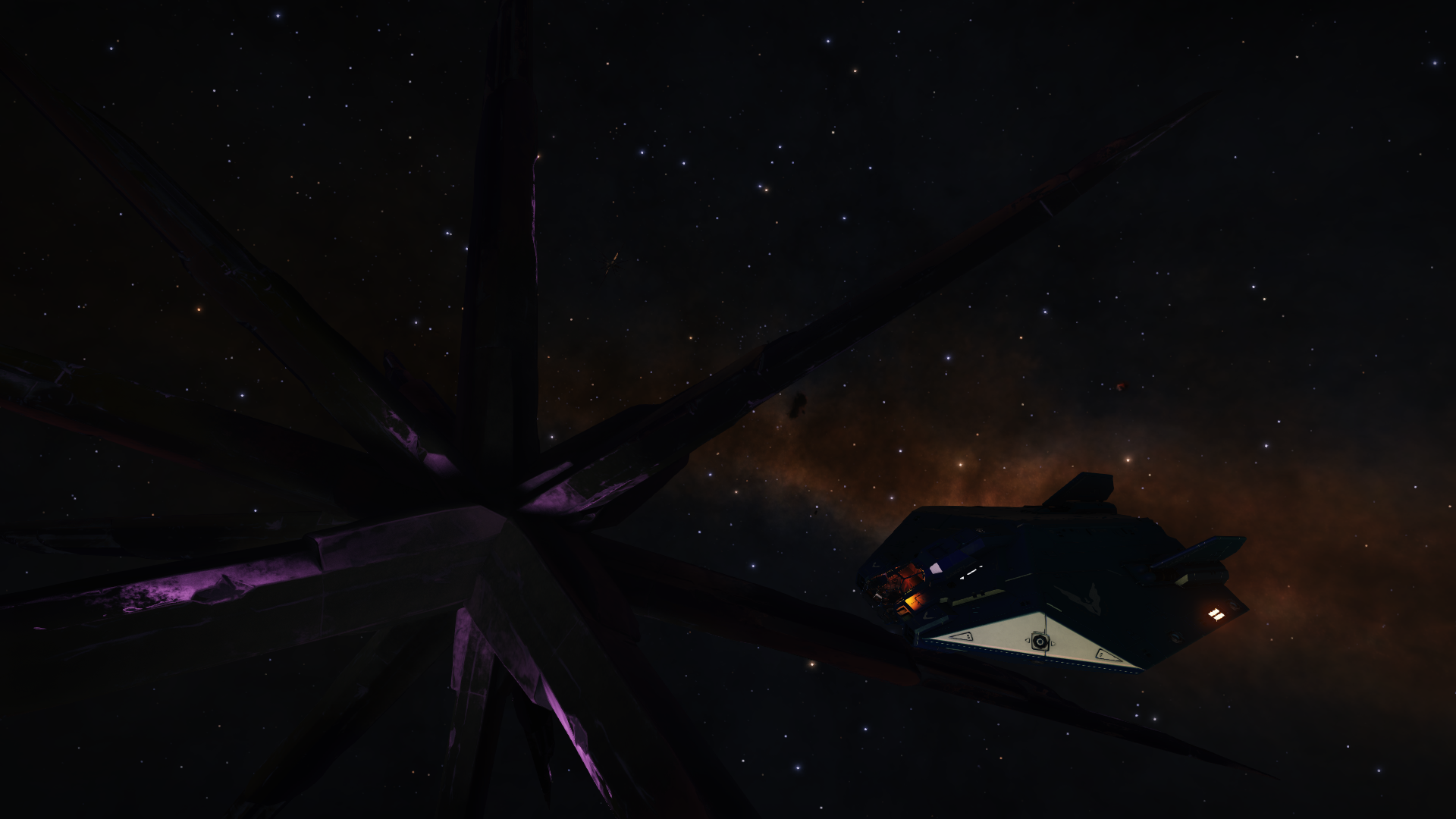 I just reached the 4th pit stop system - [Col 132 Sector RL-M a41-1]. It's somewhat near [VY Canis Majoris] and another CMDR wants to come visit it for the first time with me so I'm not going to be making much progress to the distant star for a while.

I've picked a system ~850Ly above my current position and will trek there while I wait for them to finish up with Engineering their FSD and potentially their DSS.

So far I've seen a few ingame undiscovered systems which is always nice. The majority being brown dwarfs with just ice bodies. I did get reminded of the EDSM feature that shows you potential high values bodies in your system on the dashboard by somebody in the Discord; there was a terraformable high metal content body which was estimated at 1.7 million credits so I went over and mapped that.

Nothing that interesting sight seeing wise though yet. I'm hoping to find something nice up here.

The system had already been discovered which was disappointing. I'm really surprised it was honestly but oh well. I'm heading back down now to another place with supposedly 5 stars; hopefully this place is unexplored.

Day 2 has just started and so far I've jumped to a few systems. At [HIP 39914], I touched down on [HIP 39914 1] to have a drive around in my SRV and collect some resources. It's the first planet I've been to where I got the high gravity warning - despite it being just 1.6G. Compared to the low gravity planets, this was way nicer to drive on. It actually felt like I wasn't flying in a bouncy castle.

I'm hoping to find an undiscovered system here but so far no luck. A lot of them have been undiscovered on EDSM though so that's good!

I just found a somewhat undiscovered system - [Col 132 Sector UQ-B b30-0]. Only the central star was discovered. Unfortunately, it was mostly ice bodies with one high metal content. I'm going to land on an ice body and have a drive around. Makes a change from FSS-ing discovered systems.

The jump after that landed me in my first undiscovered system [Col 132 Sector LV-A c15-8]. I'm probably going to head to the nearest station/FC just to repair and sell this data. It might sound strange to do but it just feels right. That and my power plant early in took a 3% hit because I got a little bit too close to a star (had my orbit lines off for a screenshot and forgot to turn them back on).

Stranger yet, I just realised this was my third bookmarked pit stop star. Coincidence? Yes. Or I'm just that good.

On the way I found a system by CMDR Blunt Razor. It isn't the first. Seems like they were travelling around these systems.

I stopped off at a system to scan some gas giant rings and found a really nice find. Two planets closely orbiting each other (roughly 4.5Mm) and very close to the rings of one of the gas giants. It looks incredible.

I present to you, the [Twin Orbitals]. The first POI I've named and honestly I couldn't be happier with the find. 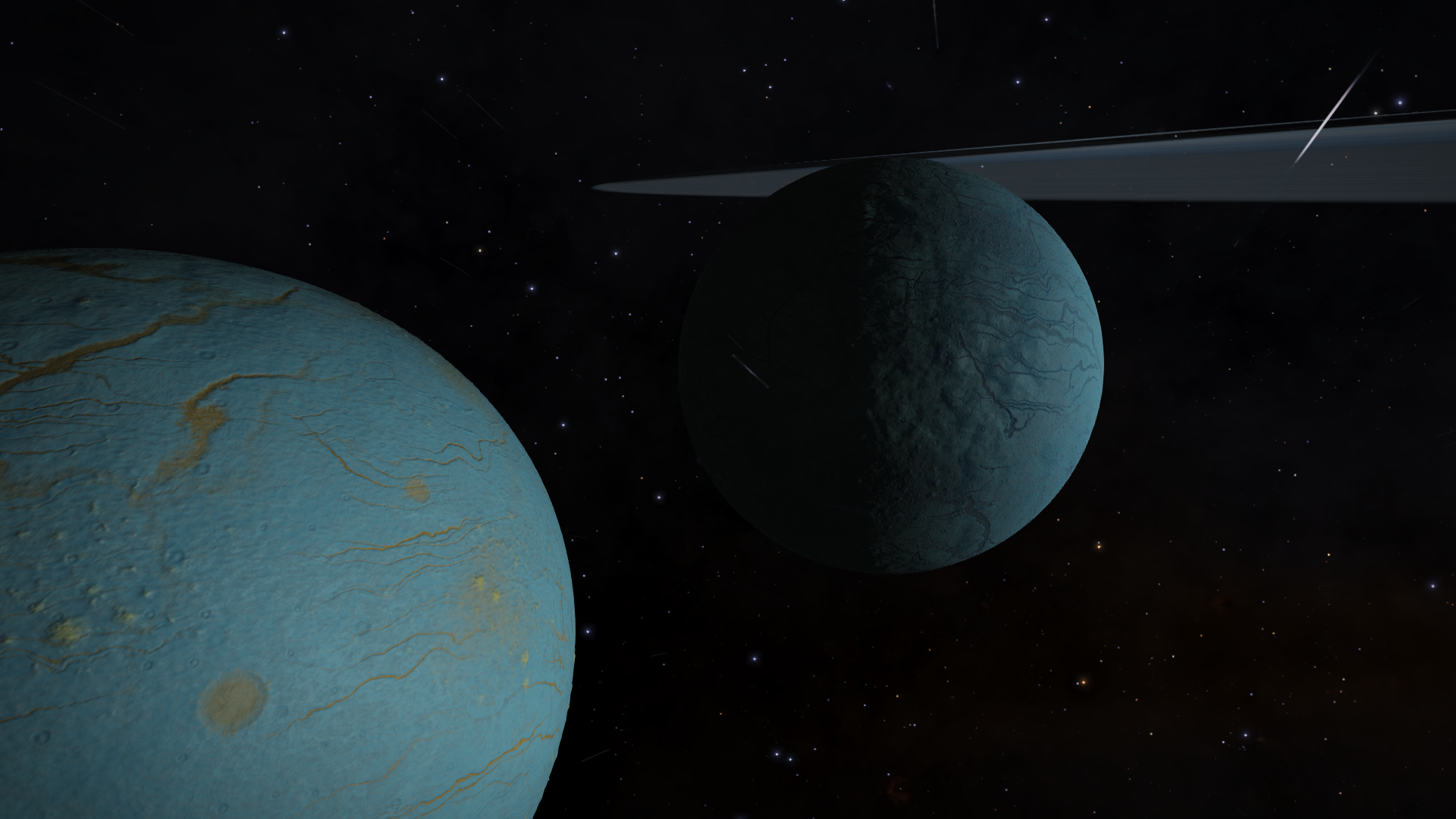 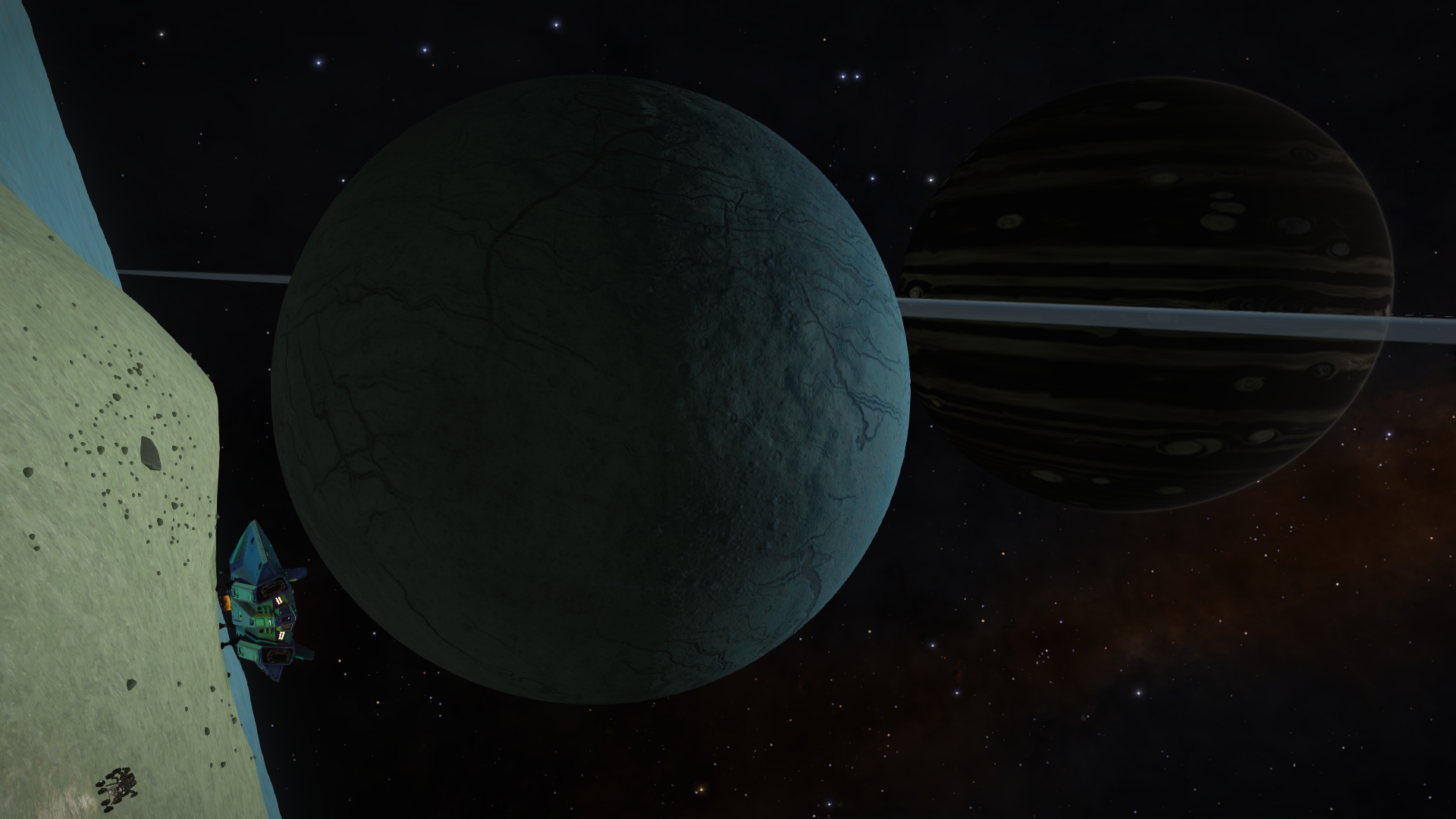 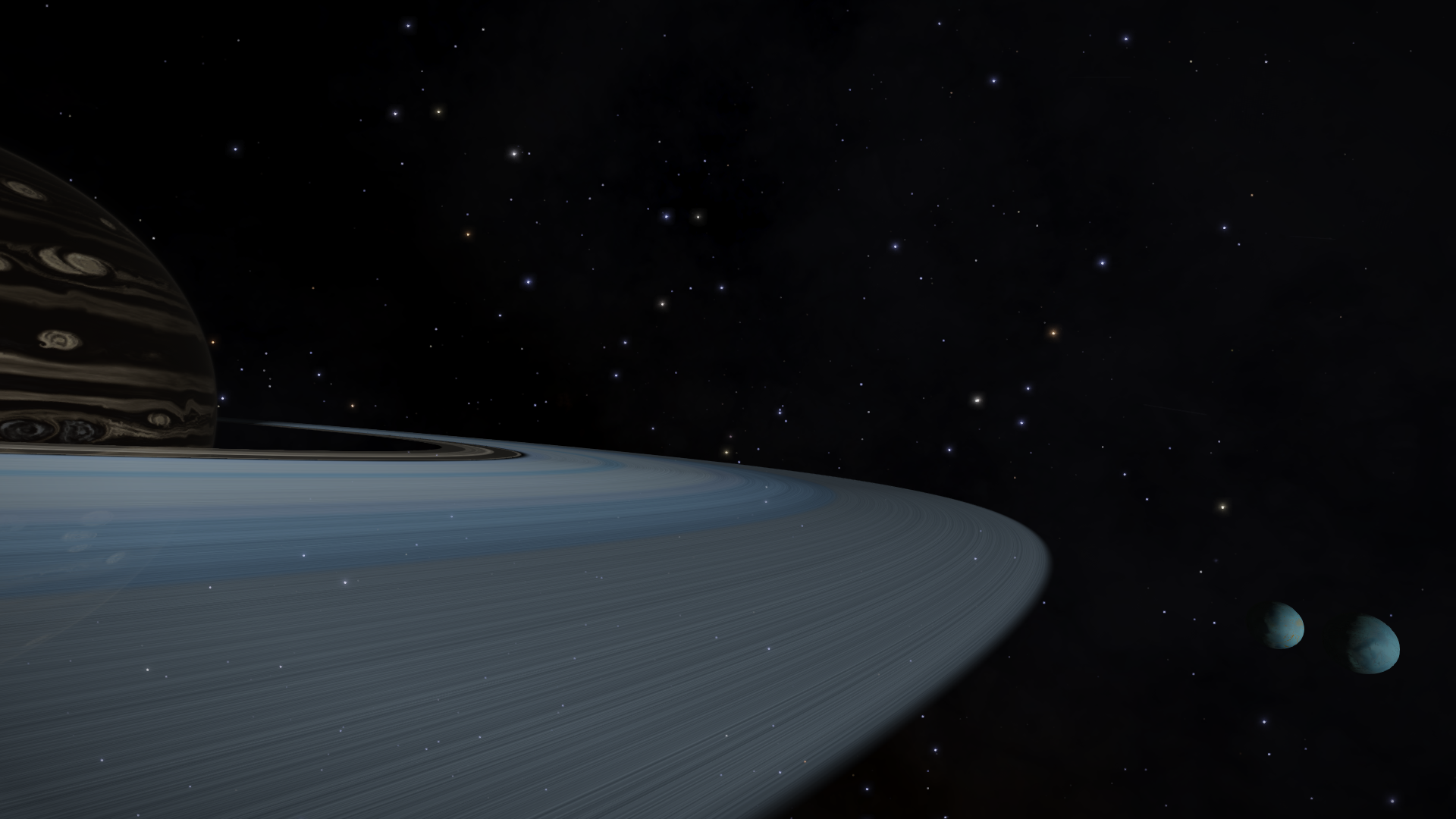 Honestly, you should take the time to check it out. It looks a lot better in person than images can do justice to.

Travelled ~300Ly to a fleet carrier and luckily I could dock, repair, refuel and sell my cartographic data. It's right near a guardian site as well but I'm not here for those aliens.

Thanks to the [CEAS - Kirkbride fleet carrier].

Now back to my nearest pit stop bookmark and to continue the journey!

Well, I've never been properly exploring before and I've managed to scrape together half of my final exploration build. Currently sitting just outside of my home station, Strzelecki Gateway, as I write this log.

I've picked up a few bookmark pit stops and interesting looking systems along the way and I'm hopefully going to take my time getting to my destination. It's 111 jumps away so that'll be interesting; around 15k light years from home.

Again, my ship isn't much but it'll have to do for this ride. Hopefully I don't blow it up. The current build is here.

Going to start making my way with the first jump. Hopefully this'll be an experience that'll end up with my ship being intact returning back to where I am right now. Home.

Came across the [Wregoe TF-N c20-11] system and did a FSS. There was an odd green tinged ice body, [Wregoe TF-N c20-11] , with a few speckled orange mountains; did not look great when flying in from above but the view when in an SRV was incredible with that gradient leading down the mountain.

Forgot to add this log here - I finally figured out that you could scan planet rings when scanning the gas giant [Wregoe LY-F b38-3 A 7]. I'm not sure if this is any good but it had:

Feel free to check it out if it's any good.

Finishing up day one in the [Wregoe HG-L b35-1] system - roughly 800Ly out from home. It's isn't too interesting but it is near a system with what I think are black holes so that'll be interesting to go and see.