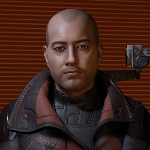 Getting back on the horse

I got back on the horse, after my somewhat maudlin weekend, slept a long time and feeling much better now. On the other hand, what else could I do? I'm 5300-odd lightyears from Sol. It's not like I can take an Apex shuttle home.

Made good progress today on the discovery side of things if not on the distance traveled side. Lots of pristine water worlds and high metal content worlds that I scanned which cut down on the travel progress. No ELWs.

I also ended up using my last heatsink today because of an absentminded frameshift jump that left me lightly scorched by a G-type star. Gotta watch those re-entries, they tend to be a little bumpy.

On that note, what genius designed those launchers to require high tech components in the consumable part? I have no way of synthesizing new ones because it needs high grade temperature conductive materials. Wonderful.

Ship's paint is starting to get patina'd, which is nice. Set down in a crater on an otherwise decidedly knobbly world for the night. I think I mentioned it before but going to sleep in zero G just doesn't work for me, something about the no pillow situation.

On that note, it's time to get some shut-eye.

According to the map, I crossed the Sagittarius Gap a while ago, not that you could tell that from looking out the window.

Pretty much all systems I come across now are undiscovered, which is nice, quite a few of them have had multiple water worlds, which is also nice, but so far not a single virgin earth like world, which is a bit disappointing.

I keep jumping and scanning and it's getting a little disheartening. But I reached my subgoal, across the gap before the end of the week. Let's keep soldiering on, at least until the DSSA Rocksteady.

Just the other day I was looking at the map, a thousand or so lightyears spinward from where I currently am is the Omega nebula, which reputably has an asteroid base. I'm contemplating diverting to check it out, but that would mean quite a lot longer a trip to the Rocksteady.

Maybe on the way back. If there is a way back.

I forgot to mention; a while after getting back on track towards my current goal of the DSSA FC Rocksteady, I found a virgin system with four water worlds, three of which were terraformable.

The day before yesterday I landed on a .5g planet to check out some bacteria that supposedly lived on the surface. It had a huge crater, and I thought that would be an interesting site to drive around in, and it was in a way. I decided to land on the edge and have a drive down in my SRV, thinking it wasn't far. By the time I realized my mistake it was quite steep and bumpy and inevitably I was going too fast. One bump sent me first soaring and then tumbling, making me black out and knocking bits off the SRV. By the time I regained consciousness I was a fair bit off the ground and sideways, with the hull down to 26%. With some judicious use of the jets and a fair scooping of luck I got myself wheels down and facing in the direction of travel that allowed me to slow down and come to a sweaty stop.

At this point I realized that the crater that I was so carelessly sliding down into was much deeper than I first thought (on later measurements, around 10 kilometers) and I'd better get my act together since I only have one SRV and any kind of medical aid is thousands of lightyears away.

Keeping the speed low and aiming for less steep bits got me down to reasonably flat ground with only an additional percent of hull off.

I then recalled my ship and loaded the SRV up to be repaired by the Depths automatic systems while I stumbled out of my suit and fell over in my bunk.

By the following day the Depths had repaired the SRV and I took it out looking for that bacteria, turns out they were white and live on the rocky ground that was pretty much also white which was fun. I ended up just cruising around and getting out to scan occasionally. Sometimes the SRV HUD would blink and I knew there was one somewhere out in front.

Once I'd gotten the samples I took a sweeping launch and looked again at how huge the crater was and left. Here's a video capture from my shoulder cam as I left.

I had a look at the starmap yesterday and was kind of embarrassed.

I left the bubble, disgusted with the Federation government with a plan to maybe find a DSSA fleet carrier. My feeling was that I was deep in the black, exploring and finding new systems... and I was 1300Ly from Sol.

The closest DSSA carrier is something like 8000Ly from sol.

So I have now put the Depths into high gear again, aiming to cross the Sagittarius Gap within the week. Right now I'm some 3500-odd lightyears from Sol and feeling a little better.

It's pretty dark out here, but so far I have had only minimal problems routing thorugh the gap; I bumped into the maximum fuel usage limit a couple of times, but could always route around it. I don't know if my Asp (at its current configuration) could have managed that.

At least nobody can see my burning ears out here.

Spent the last couple of days on economical routing along FGK stars steadily going towards the core and I've found a number of undiscovered systems. Only high metal content and metal-rich worlds in them though, and the occasional biological signal, when there was something interesting at all.

I did come across a couple of water worlds and one ELW, but someone had always already been there. Still, should net me a bit at the end.

The estimate readout is currently at... (checks screen) 41 million. Not quite at the 200-ish million I need for my elite ranking. Wonder how accurate that estimate is.

I was beginning to feel a little homesick; my supply of tea was running short but on the last system I was in before calling it a day I found a planet with a crash site of some poor unfortunate soul and wouldn't you believe it they had been shipping tea! The canister looked just fine, although it seems my exhaust plumes from landing caused it to have a little adventure downhill.

So now I have a ton of what smells like pu'erh. I would have preferred some nice ceylon (maybe even earl grey), but beggars can't be choosers I guess.

I guess I can stay out here a while longer now.

You know that feeling? When you jump in and the radar is entirely blank?

Nothing spectacular so far though, mostly high metal content worlds and the usual ice balls. A couple of worlds with nice atmospheres, one of was purple the other puke green.

I did spend a fair amount of time doing some on-foot bio scanning, one of the planets had four species and the last one was a fungus that apparently only grew in broken mountainous terrain, covered in boulder that made it essentially impossible to drive an SRV on. I ended up slowly scooting the Depths a few meters over the surface to find genetically diverse samples. And then to find a landing spot...

The labcoats better appreciate that one.

I'm going to linger in the star neighbourhood a bit and see if this undiscovered system was a fluke.

Last week, the morning after I set down on that rock for the night (somehow just floating in space at night just doesn't seem right) I decided to have some fried eggs instead of the usual nutrient mix for breakfast. I'd picked some up at Obsidian Orbital to keep for just a time like this with the simulated sunrise of the ships smart lighting cresting the equally simulated horizon.

I don't know what kind of a chicken those eggs came out of (was it even a chicken) but I got quite heartily sick from them. Kept me in bed for the rest of the week sipping water and I only managed to get some actual properly synthetic food in me late last night.

Which reminds me I need to scrub the head too, fun.

Anyway. Set off again core-ward, and some forty jumps later I am now beginning to find systems that are not completely scanned and some that are even completely and utterly virgin. Sweet.

Still only a single Ammonia and one Water world found, with a fair bit of high metal content worlds.

One had some cyanobacteria and another also had some odd spongy thing that the genetic sampler declared to be life, so who am I to argue. Should be worth something to the eggheads (ugh, wrong deroganym, let's call them white coats) at Vista Genomics.

The last few systems before I set down for the night again (and the damn scrubbing of the head) I went to economical route plotting and changed to only FGK systems, I heard someone talking about them being more likely to have earth-like worlds, and since the systems now being less visited it's worth taking shorter jumps.

I'd like to find myself a fresh earth-like, that'd be nice after last week.

Anyway, signing off for now.

When I woke up this morning (ship time, it was bright sunlight outside) I found the contacts panel beeping at me, having found five distress beacons in the very system I had gone to bed in. And here I thought I'd gone out in the black, but apparently people have been lithobraking all over the place. I keept glancing at the comms panel expecting a tourist ship proclaiming its 1-percent-ness at any moment.

I went to check out the nearest beacon and found two intact escape pods. Picked up the lucky bastards, congratulations, you'll get a ride back to civilization, at some point.

Can't help the others, I have no cargo space.

Since this apparently is a really well-traveled spot (I guess going galactic south from Maia is pretty popular) I decided to turn towards the core and set my sights on 0,0,-700something. This meant going past the bubble and sure enough there wasn't anything undiscovered around.

Set down on a rock next to a damn crash site in (looks at panel) Synuefe KZ-F d11-9.

I feel someone should be fined for littering or something.

Set out from Maia today, heading towards a random system in galactic south.

Before I left, I went to see some of the crashed Thargoid ships that litter the planet that Obsidian Orbital orbits. There were some strange alien devices littered around the crash site and some strange sounds started playing from the sound synthesis modules of my ship. Creepy. I left pretty quickly.

Started warming up my exploring muscles on the way south. I am very rusty. Also ended up firing off a couple of heat sinks accidentally. Put some sticky tape on the button to make it harder to shoot one off accidentally, but now I only have one left. Oh well.

Power plant still runs hot, but haven't pegged 80% while scooping yet so not a big issue.

Landed on some barren rock, the Milky Way still looking pretty in the sky. Tired. Gonna hit the bunk now.