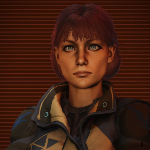 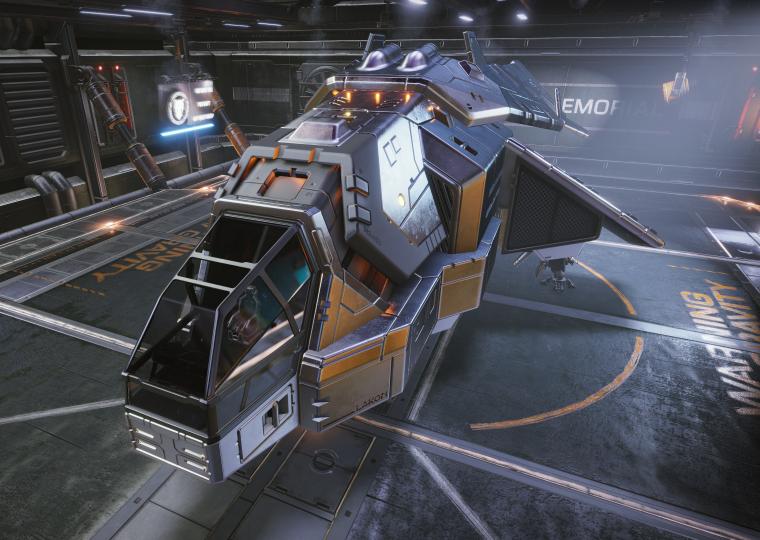 The best part of being an explorer

I'm continuing my tour of nebulae and any other colorful phenomena on my way back to the bubble. Last time, I mentioned I had some photos from before and after Medusa's rock. Well, here's a two of them. But you know what the best part of being an explorer is? Not having any set destination, because the journey itself is the destination. Case in point: take a look at the next photo I took on the way to the Elephant Trunk nebula: First off, I will admit this nebula is a bit of a bust. It looked interesting in Galactic Cartography but now that I'm three jumps out, it looks kind of meh. But that's not the most interesting part of this photo. Not by far.

See that cluster of bright stars in a line? Thirty or so jumps ago, this looked like an odd smudge of light that I at first thought was a distant gas giant cluster. Except gas giant clusters don't appear in system after system. And finally, they resolved into dots of light. Dots that grew larger and larger and next to a gray smudge.

As I drew closer to the Elephant Trunk nebula I kept consulting Galactic Cartography to figure out what they were, and now I know: the NGC 7822 nebula, which is home to what looks like a cluster O-type stars and lots of black holes. That sounds exciting enough to be worth a diversion!

That's what makes exploring so great, and why I'll always be an explorer at heart. Out here, I answer to no one and can go where I please, so long as I have a hull around me and fuel in my tanks. And that's why I think I'm also going to zig-zag back to the Cave Sector, North American Sector, and Veil East and West to see the nebulae there too. I'm only around 3000 light years from home, but so what? I'll get home when I want, after I've gone where I want.

I've encountered some strange new life. I don't recall seeing this during the Distant Worlds 2 expedition. The humans I saw when I passed through Medusa's Rock count as "old life" too, although I wouldn't call them strange. Except for the one-armed, one-eyed guy in the lounge who was sleeping, drooling on a beat-up Manticore Intimidator and smelling like barrel of stale Lavian Brandy. I bet he had a story to tell had he been sober, but I'm not fool enough to wake some sleeping drunk holding a shotgun, station security or not.

I wonder what the Thargoids think of other life? Do they have explorers like us? Do they appreciate new lifeforms like we do, or consider it "strange"? They definitely don't appreciate us, that's for sure, and the feeling is mutual. I suppose if nothing changes, we'll never get to ask them.

I have more nebula pictures for later, including a little from before Medusa's Rock. I had stopped there for repairs (I had managed to lose another 10% of hull strength since last accident), do a few courier missions for quick cash and sell some of my data for even quicker cash. I'm saving most of my sales for the bubble, though. That much data should ingratiate me to the local authorities quite nicely.

I liked Dr. Kay's Soul. Conveniently, it was near a few other nebula. I added some more pictures to my collection for this voyage.

I then proceeded on to the Temple region, aiming at a rather dark nebula I had noticed in the galaxy map. In hindsight, I don't think that was a nebula at all. I think it was a dust cloud. I never saw anything as I approached it, nothing but blackness. Even when I arrived in it, no lights. So I guess the moral is that if you want to find color, don't look in black clouds.

On the other hand, I had forgotten that not all planets are boring gray balls of ice and rock. Blaa Hypa JH-M d7-0 6 b a (ugh, what a mouthful!) had some golden canyons with some interesting features that I scanned.

Unfortunately, that wasn't the only thing I forgot about planets. One of the planets I tried to descend on to scan its geology was about 1.75g, and apparently I forgot all about extra care on high G worlds. Yeah, 1.75g isn't that "high". But still, in my rush to get down for scanning, I rode full throttle descending at a fairly steep angle all the way down. By the time I noticed my descent rate was rather hot and tried to pull up, it was too late. I blew right through my shields and almost two thirds of my hull integrity.

Unlike Distant Worlds 2, I'm on my own with no support ships that I can call on for a quick hull repair. Needless to say I've been a lot more careful on descents since that accident, double-checking gravity and reducing throttle well above the surface to a manageable level on descents. I'm pretty sure I can get back to civilization with what I have left, so long as I avoid more stupidity. For me, the answer to that question is easy: whatever way seems likely to showcase the wonders of the galaxy!

It's too bad there's no signs floating out in space saying "wonders are over here". So you make do with educated guesses. I like color; lots of color. (Sometimes I wonder how I ended up in space which is pretty much defined by a near monotonous black.) Finding color aims me toward nebula, traveling vaguely in the general direction of where I want to go.

Since I'm a scan junkie, I usually come across geological and biological phenomena. I can't visit them all, but still one needs to "stop and smell the roses" along the way some of the time. Just not literally since taking off my helmet to do so would end my journey well before I'm ready. Besides, a lot of these worlds have sulfur compounds and I definitely don't want to smell those. I had quite enough of that early on in DW2 in the Starlight Tracer. Somewhere when I restocked at a station, they mixed up my requisition and loaded a batch of rations that I would never have ordered for such a long trip. Or even a short trip. I am unfortunately well acquainted with what that brand of rations does to my stomach. And afterwards.

But I digress. Geology and biology interests me. It breaks up the sameness of thousands of lightyears and it's good to get out of ship and move around. Some of of those finds are quite beautiful too. It doesn't hurt that scanning them also will net me some credits, and sometimes the search for them brings out amazing vistas. Right now I'm on my way to Dr. Kay's Soul and I stopped at Blue Eaewsy AY-E b27-17 2. I didn't find the fumaroles I was looking for, but the view was spectacular. Dr. Kay's Soul is just over the horizon, beckoning me onward! 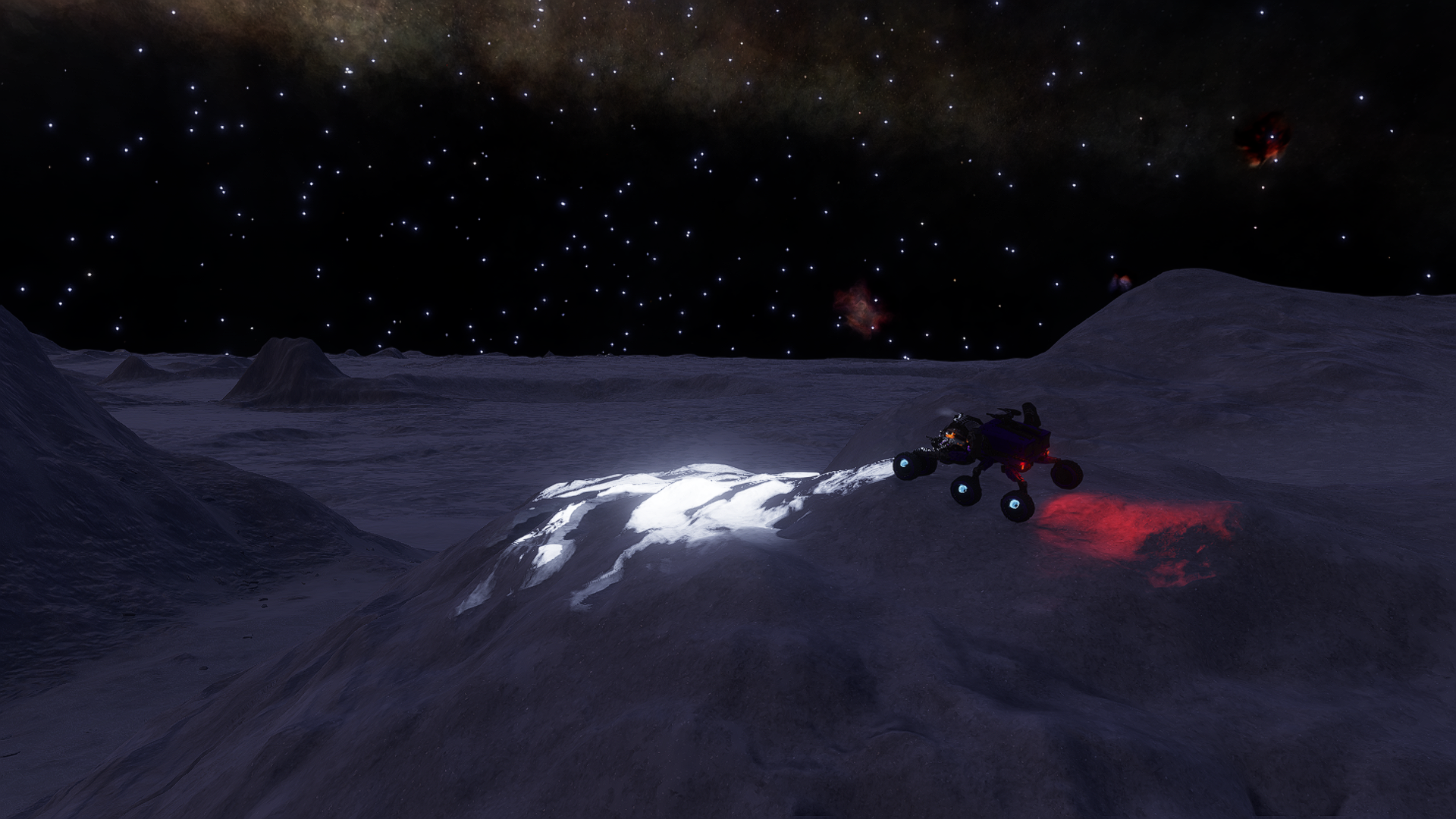 Wow. I can't believe it's been so long since I've made a logbook entry. Just looking around the cockpit, I feel rusty. I'm practically learning how to be a pilot all over again.

After Distant Worlds 2 I was burnt out. After months spent in that Diamondback Explorer cockpit, that was the last place I wanted to be. I hung out at Jacques Station for some years. But it's time to get back home.

I have to admit, I did get into a little bit of trouble. Who knew that security at planetary installations would shoot at me and land me in jail? It's not my fault I didn't hear the guy with the gun ask me to stop for a search while I was lost looking for a container. He was talking too softly. And my comm set was all static! But did the judge believe me? Of course not! I had to pay a 500 credit fine on top of lockup. At least the Apex shuttle ride back to Colonia Dream was free.

So if I'm being perfectly honest, yeah, that might have something to do with why I want to go back home. But I always intended to see Jameson Memorial now that I'm an elite explorer. I have more credits than I know what to do with. An Anaconda could be nice. Or an Imperial Clipper. And while Colonia is nice, it feels small. Constraining. I want to get back to where things are really happening. And see my brother.

It's time to bring Starlight Tracer out of mothballs and finish my odyssey. Maybe one day I'll be back here again. There's some engineers with whom I'd like to get into good graces. Perhaps I'll return in a fancy new ride.

Well, I'm not dead. Yet. I just haven't had much motivation for leaving Jacques Station.

Still on extended "R & R" from returning from DW2.

It's hard to believe it, but my nebula tour is over. And amazingly I am only 7 jumps away from Colonia! Time to flush out the rest of my photo album... I took a detour on my nebula trip because I saw from the codex there were Lagrange clouds nearby. And you know, I had forgotten how beautiful they are. I like them more than nebula.

Along with some of the nebula I passed, these vibrant gas clouds paint the sky with vivid colors. It feels like a homecoming festival of sorts. Sure, technically Colonia isn't "home" but at this point anywhere with humanity I think qualifies :-) One thing I appreciated about the Distant World 2 expedition is that the campaign passed by several scenic planets. Finding interesting planets isn't my forte it seems. I'm lucky to find interesting looking ones, let alone spectacular views from the surface.

Every once in a while though I do find something that catches my eye. While in the neighborhood of the White Smoke Nebula I found a planet with crater rays. Honestly, I'm not sure when the last time I saw one of these was, so I swung over for a closer look. I also went anemone hunting and found these. With each passing day I feel Colonia getting closer. I'm well within 10 kLy of it now.

I passed through the Leo Szilard and White Smoke Nebulae. Last log, I noted that some EDSM astrophotography entries seem more vibrant than when actually there. That wasn't true of the Leo Szilard Nebula. The vibrant colors were all I expected. The White Smoke Nebula's beauty on the other hand really does depend on the point of view from it. I must have wandered around its perimeter for a while trying to find a good shot. And it does look like a cauldron with smoke rising from it, though in my opinion the brew is some orange stew with purple steam. I wonder what's cooking?