In this system you can find all the materials for FSD Injections. This is a GREEN system.
Reporte de tráfico

It was named by the Galactic Mapping Project with the name of: Bary’s Wonderland 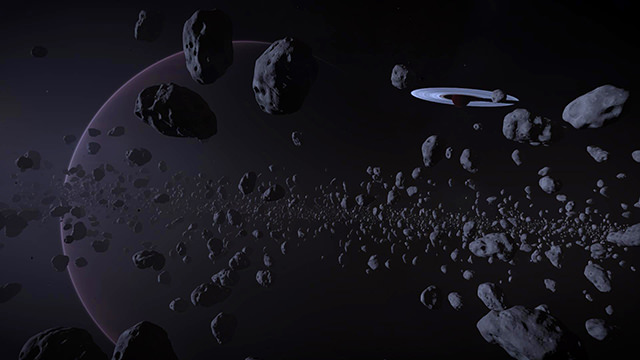 While there are many exceptional aspects about this system, including its overwhelming size [the secondary star is 356,000ls from entry], the most remarkable are the three Class IV gas giants on the primary star, which are operating in a barycenter orbit. Two of the gas giants are 3 ls from one another, leading to a remarkable view between the planets only visible in such orbital alignment.

The system as a whole contains three B-class stars and an A-class in binary orbit with one of the B-class. The outermost B-class star revolves in a barycenter orbit with the primary and binary stars, making its orbital period a remarkable 1.6million days [4,400 years] at a distance 337,000ls from the primary star. This star contains its own collection of planets, including a Class V gas giant, the closest orbit. There is also a terraformable water world orbiting this distant star. Not for the faint of heart, this system’s complexity offers a magnificent experience for all explorers willing to invest the time to uncover its majesty.

The system is also a green system containing all jumponium materials. Highest percentages of materials in the system are listed here: