This system was visited for the first time on EDSM by big_bad_lynx.

The 'Coronet' Pulsar is the colloquial term for the double neutron star system of PSR J1856-3754, the closest pulsar to Sol with a mere 521 light years. It lies in the Corona Austrinae molecular cloud and is associated with the so-called Coronet Cluster (CrA), a small cluster of young stars embedded in a small emission nebula (R CrA/NGC 6729) in that same region. The pulsar is also a member of the Magnificent Seven, a group of isolated neutron stars that are all relatively close to Sol and fall in line with the Gould Belt.

The pulsar was once suspected to be a quark star, a hypothetical type of compact exotic star composed of quark matter, where extremely high temperature and pressure forces nuclear particles to dissolve into a continuous phase consisting of free quarks. Later observations determined it did not have sufficient temperature and size for this type of star.

Survey in July 3303 revealed that the system is actually two pulsars in close orbit, along with a companion B-class star and two L-class dwarves. The primary pulsar is currently the hottest known stellar object, with a surface temperature of 985,067,520 kelvin. 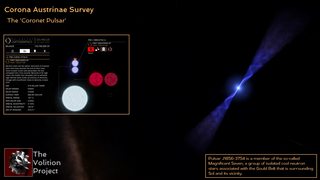