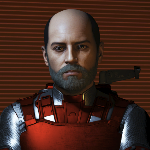 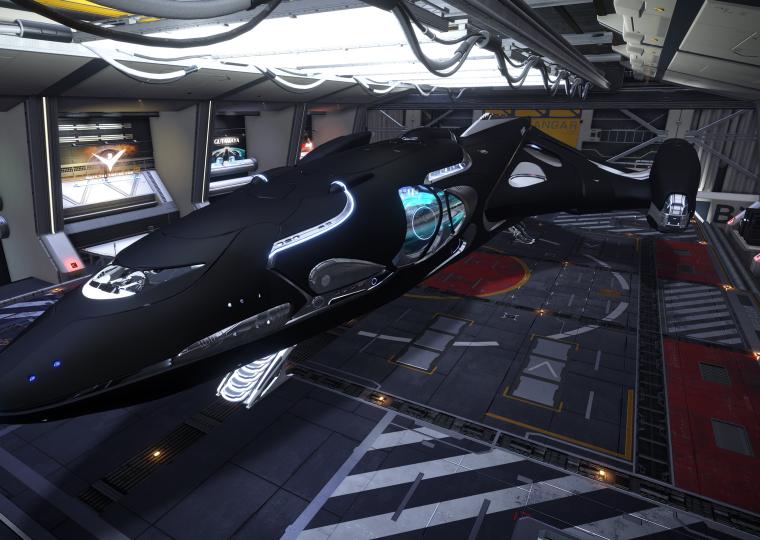 Even after weeks of extensive search we did not find the binary ELW ALD was speaking of. So, I decided that its time to bring this expedition to an end. Besides I have to relay the bad news to ALD which I can only do from a station terminal.

“Hunter. Plot a course back to Colonia.”

“For real?” she asked visibly surprised.

“Haven’t we found enough geysers? Besides, this part of the galaxy is pretty good explored already. Even I was once here.”

“Yeah right. On your NWE. Well, you get no argument from me.”

“Commander, there is an urgent communique from the Empire !”

“Route it to my ready room.” I told Hunter while I walked into my office.

“Computer. Shut and seal the door.” A soft but clear tone signaled the compliance of the computer.

I went to the wall with the safe in it, put my thump onto the finger scanner and looked into the iris identification scanner.

A door in the wall opened with a hiss. I opened the door and took the SDD device out of the safe. The Secure Data Decryptor, short SDD, was a device which connected wirelessly to my main terminal. It worked on the basis of quantum cryptography. A fairly old but still highly efficient means of encrypting data. It has not been hacked for over 1,100 years since it’s successful deployment in 2201 by ID Quantique (Earth, Switzerland, Geneva).

I sat down and switched the device on. A logo of the IDC appeared on my screen with a text underneath :

You are approaching a region of space which is of highest interest to the Empire;

There is supposed to be a binary earth like world in that region which has similar properties to Capitol.

Please travel to the PYRIVO UU-V D sub-sector and scan that region for a binary Earth like world. Should you find it, please scan the whole system and conduct a deep space research for any anomalies.

Report back as soon as you arrive at Jaques Station in Colonia.

I switched off the SDD, put it back into the safe and closed it. The message was deleted as soon as the SDD was shut off. I told the computer to unseal the door and went to the bridge.

“Hunter, please plot a course to the Pyrivo UU-V D sector and spool up the FSD.”

Yesterday we travelled over 6,500 Ly. For some commanders this is not much, especially the ones from the Mammalia-Rodentia-Muridae family, also known as the Fuel Rats. For us, its enough. We found 4 ELW’s and 2 WW.

Today we decided to take on the sub sector in which we found the last ELW. We still have time and we are only 700 Ly away from WP10. The sub-sector contains 178 systems. Since we already have one ELW, lets find the other ones.

After hours and hours of jumping through the systems we already found 4 ELW’s, 26 WW’s and 2 AW’s. And we found another orange giant. We went through 103 systems. We would have to scan another 73. But we got tired after so much jumping and decided that it is enough.

“Yep, me too. But it was well worth it. Over 28 million credits on data. Plus the first discovery bonus.”

“Ha, ha. Wait until we arrive in Masefield’s Ocean. There we will have to scan a lot. And it’s not even certain that we find some untagged systems.”

After we arrived at WP10 we shut everything down and called it a night.

“Eureka ! I found ‘em !” I was overly excited to finally found some SVG in that particular system. Hunter not so much.

“Whats the big deal. You found lots of them.” she said bored.

“Then we wait until the star comes up.”

“Yeah, yeah. If you can’t shoot it, it’s not worth anything.” I yelled after her. But she already left the bridge. I don’t know what to do with her. Perhaps it might be a good idea if she quits. Exploring is not for everyone. And we are at it since over 100,000 Ly.

Commander Alesia told me that those 'SVG' I found are actually water magma. And I believe her, she is the foremost expert in everything volcanic. Looks like the ships computer got it wrong, wouldn't be the first time. 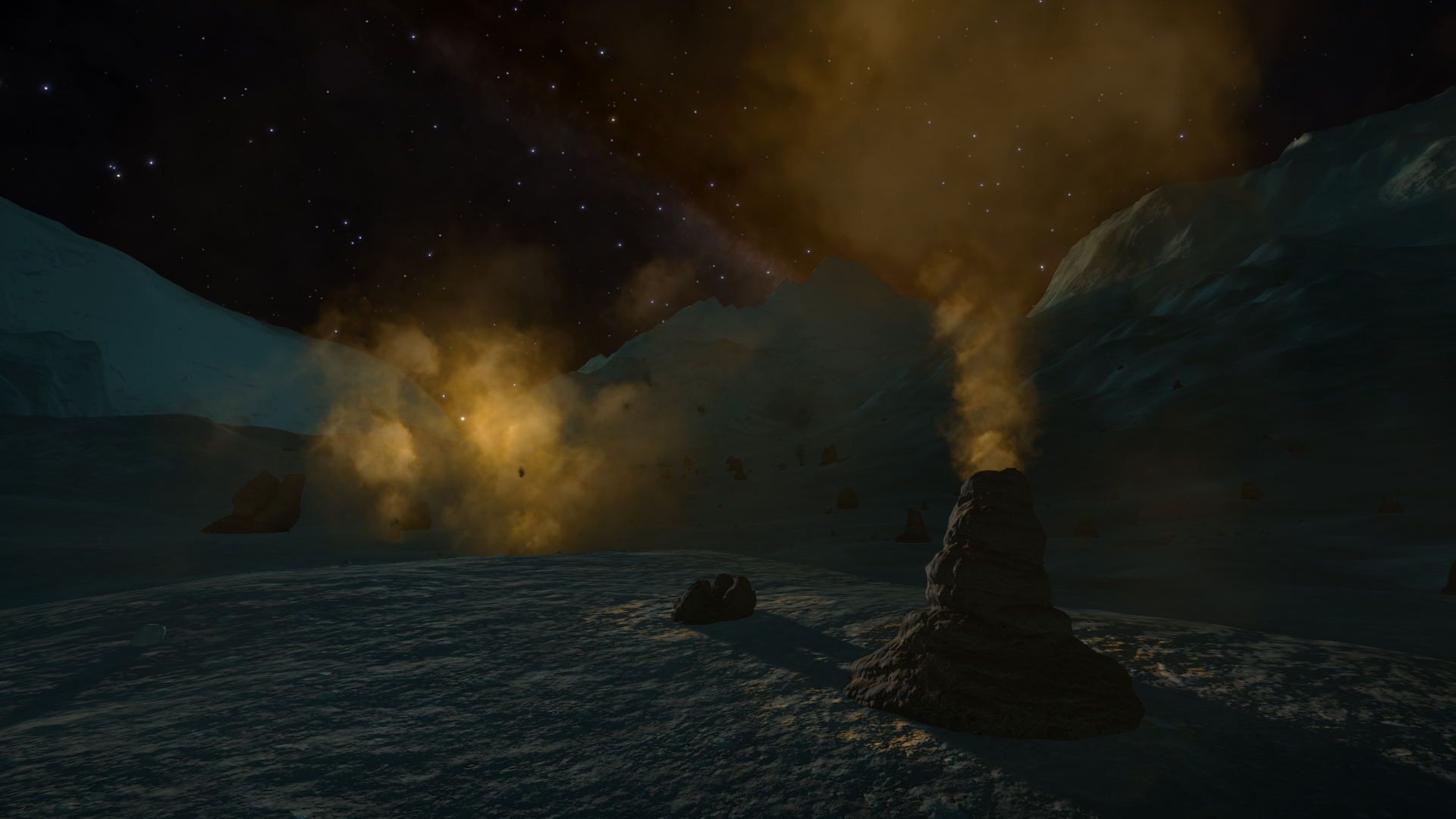 This is quite an interesting sub sector. It took a few hours to scan but well worth it.

I found 4 ELW’s, 21 WW, 1 AW and 1 K8 IIB Orange Giant. The giant actually surprised me since I did not pay any attention to the target panel at the time of jumping. Nice surprise.

Next target, WP#9. Its just 60 jumps, like 2,000 ly, away. On the way I found an ELW, which meant I had to scan the whole system. One jump later I found another one. But this is special. It is a ringed EWL orbiting a binary Sudarsky class III giants. Add to this another Sudarsky class III giants with 10 moons of which 3 contain Silicate Vapor Geysers (SVG). Now I ‘only’ have to find an SVG field and this will be the perfect waypoint for a later expeditions.

Last week Hunter told me that she wants to quit. I asked her why. She said that the she can’t deal with the constant search for geysers and stars anymore. And that she is a fighter and there is not much to fight out here. I told her that she should think about it. Because when she quits now, she will not only loose her status as a crew member, but there will be no payment either. She said she is thinking about it. 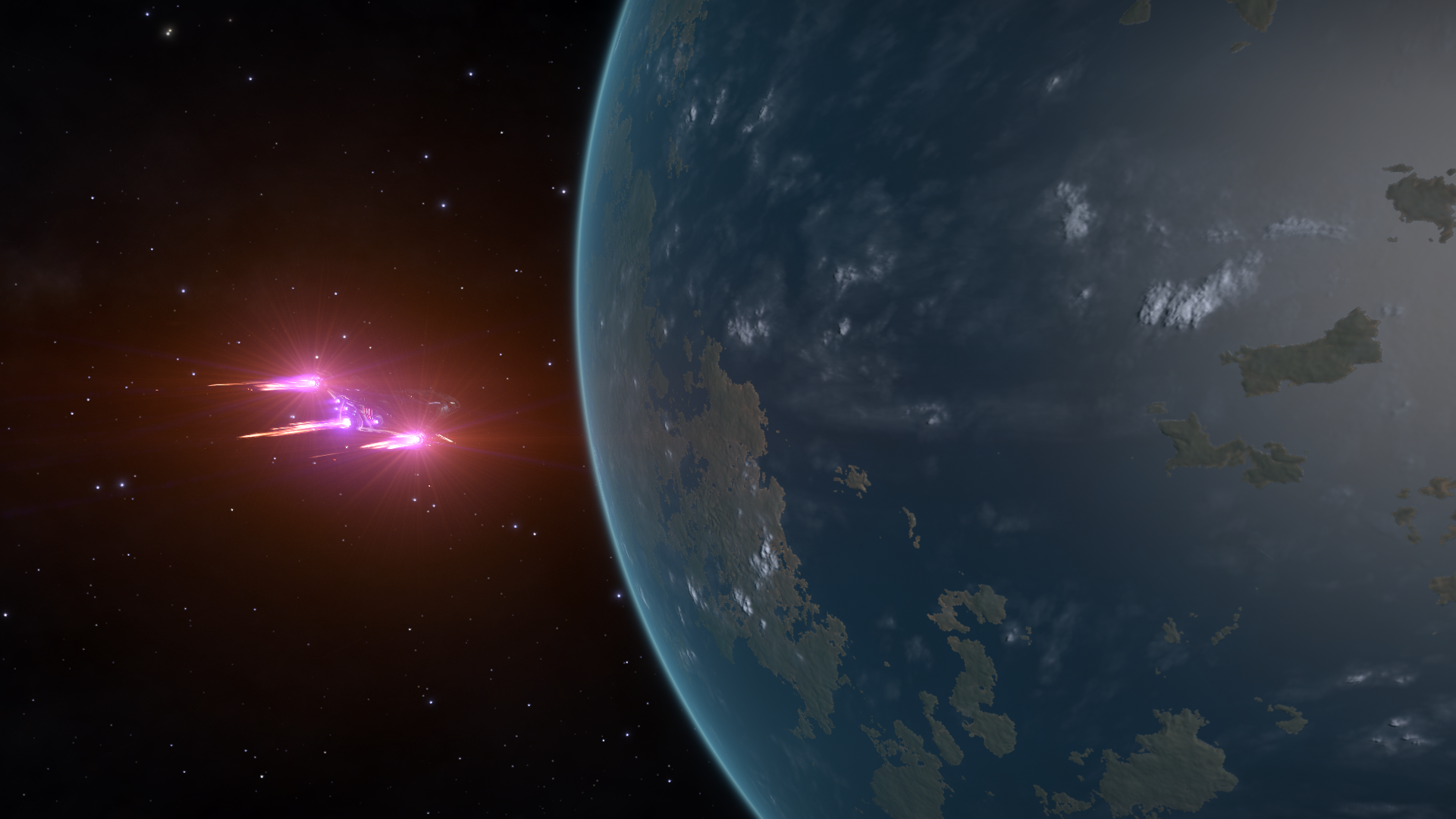 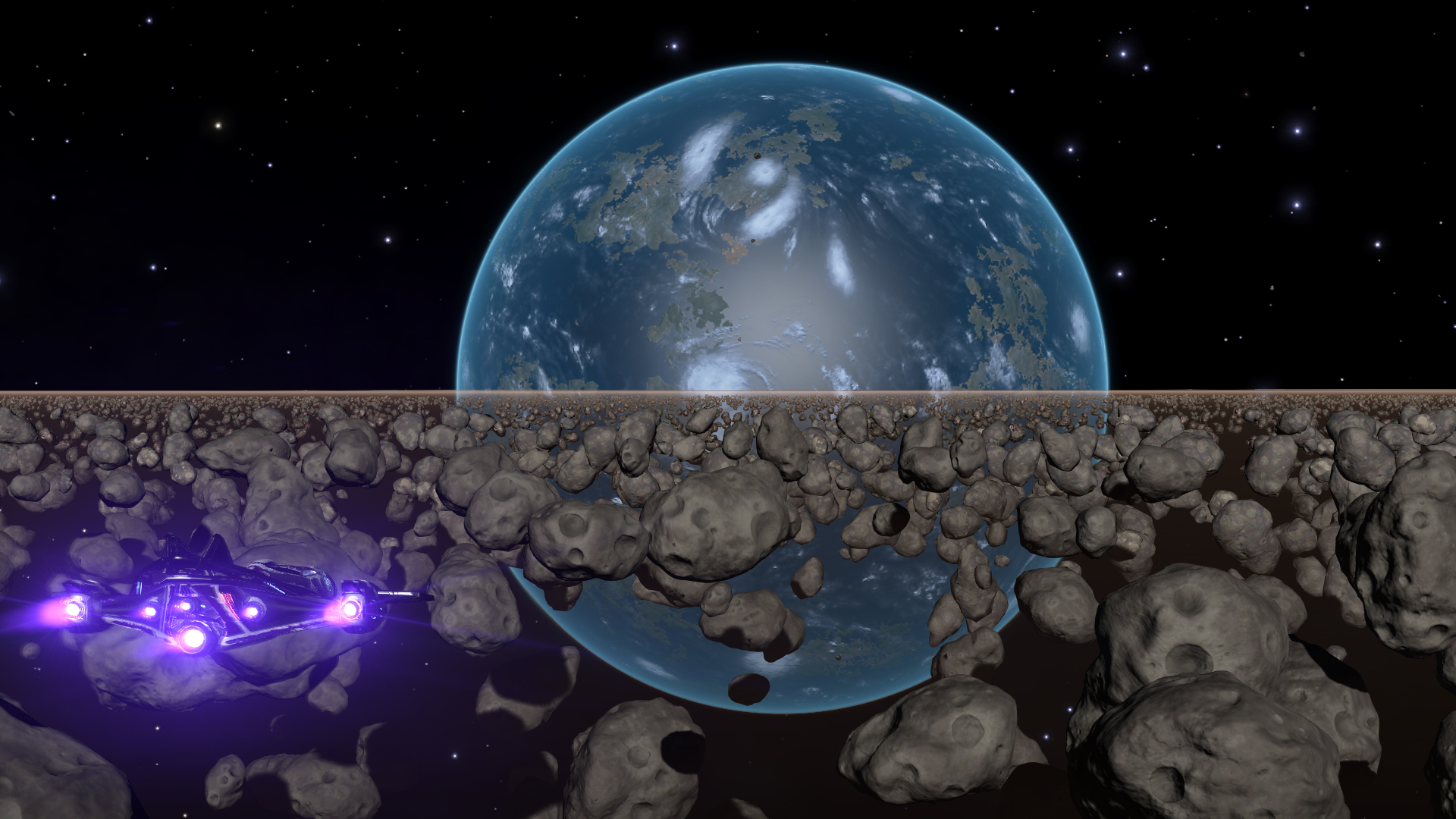 2 days ago the Baron and I searched another D mass sub-sector. We needed to scan 97 systems. Which is not a lot considering that near the core a sub-sector contains about 10,000 systems. Which, to scan, would take a very long time indeed. The sub sector which we have scanned was at -70Z. This should give us a higher chance of finding ELW’s.

Yesterday we took yet another sub-sector with 106 systems. Actually the Baron scanned a few systems, one with ELW, and I did the rest since he was attending more important tasks. It took me 5 hours to go through all the stars. And the outcome was not near as good as the sub-sector before. 2 ELW, 17 WW and 4 AW.

Today I was exhausted from all the search for ELW’s and continued the journey toward WP#9. And then, after about 50 jumps, I found another ELW. Should I scan it and move on or should I take the whole sub-sector and search for more?

Oh what the heck. Lets do it. Its still enough time and we are pretty close to WP#9.

And lo and behold I found another ELW. This D sub-sector, btw, has 158 systems.

Lets see what else we find tomorrow.

Today the Baron and I searched another D mass sector. We needed to scan 97 systems. Which is not a lot considering that near the core a sub-sector contains about 10,000 systems. Which, to scan, would take a very long time indeed. The sub sector which we have scanned was at -70Z. This should give us a higher chance of finding ELW’s.

Waypoint #8, half way through the MCE. The WP meet was on an icy planet near a canyon. The canyon bottom was to rough for an SRV race and who wants to race on an icy planet anyways. It would have been more a sliding competition. But the canyon was long enough for an SLF race. This time I decided to give the Baron the honor. At least Hunter cannot blame me for loosing.

Well as it turns out she blamed me anyways. The Baron lost.

“You Commanders are unbelievable. You loose every race.” she frowned.

“We are explorers not fighters.” I replayed.

“Then you just have to git gud.” she said saucy.

“What?” those young folks with their silly terminology.

“Yeah, whatever. We are good at other things.”

“You got a problem with that.”

“You better. I can leave you here if you wish.”

“I didn’t say nothing.” and of she went into the galley.

“You want something?” she yelled from the galley.

“Yeah, bring me some Neritus Berries and a Fujin Tea”

Nice safe, I thought to myself.

After the mass jump every commander went its own way. I plotted a route towards the galactic plane. Then I thought about an article I read recently in Galnet. There are Commanders who search a whole sub-sector of D mass stars. Those are class A-G stars with a higher chance of ELW’s. Well, I thought I try it out. I selected a sub-sector with about 40 D stars in it and started jumping from one system to the other. It turns out that it is a rather tedious endeavor. The consecutive numbers are not sorted. So it happens that I had to cross an already scanned system several times. Later I asked the Baron to help me. He got right to it. He liked the idea. Flushing out ELW’s he called it.

As we were almost finished with scanning the systems the Baron found an ELW. Look at that. It seams to work. I jumped to the system he was in and we scanned the it in a wing together. So that we both get credited.

Later we selected another system with 62 D stars. Unfortunately we had to cut the search short. Well, there is always a tomorrow. 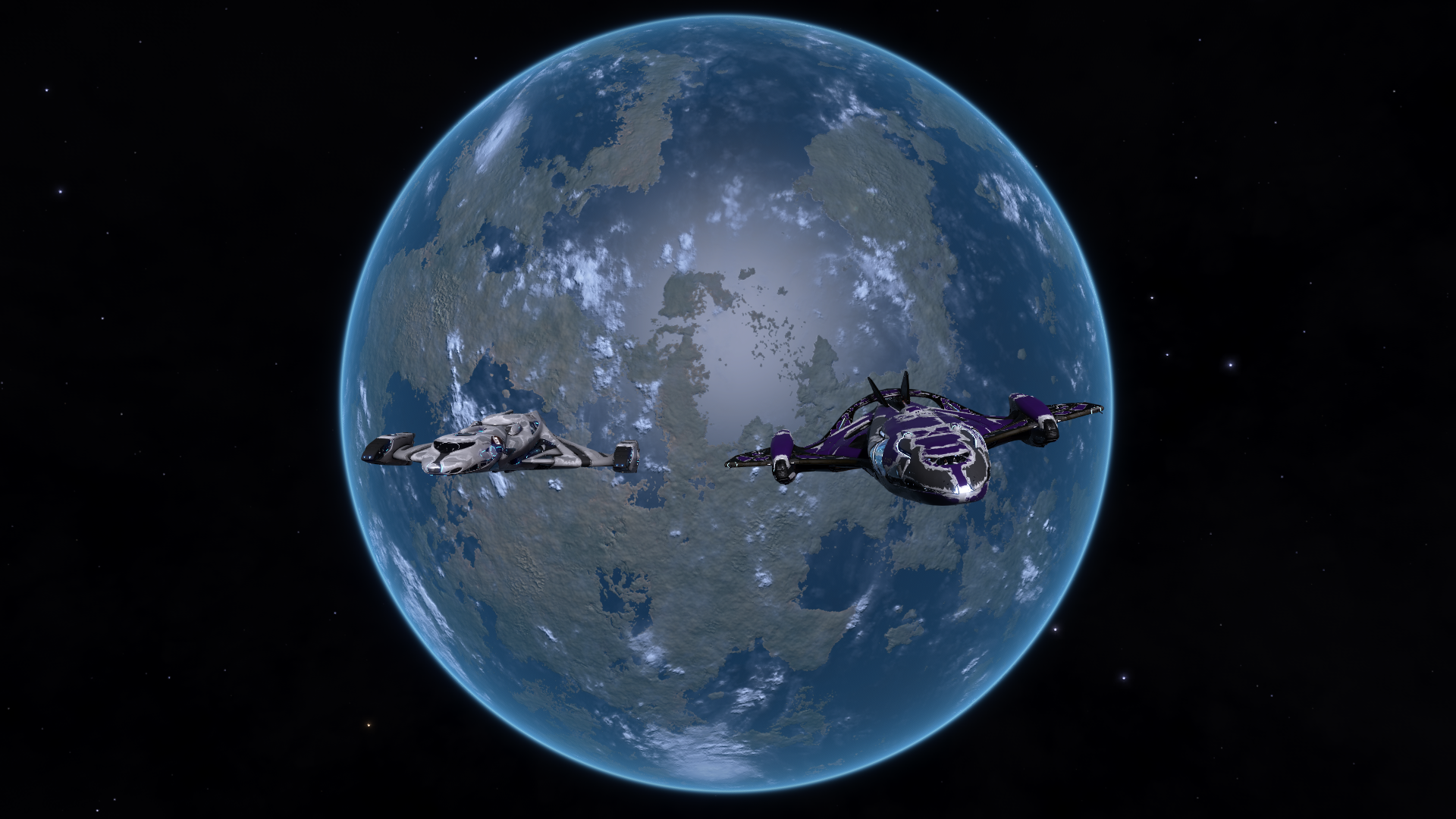 Yesterday we jumped in a system which has a moon in the HZ. Temperature is about 285 K, and the moon has an radius of just over 400 Km. It contains SVG's. There is another moon around this Y star which has major iron magma. But the temperature is more like 385 K and the radius 750 Km.

After hours of scanning the SVG moon we went to the hotter one to scan for iron magma. But as it seams it was not our day. We did not find anything. So we landed for the night.

Today we searched again on the iron magma moon. But no luck. As I once said before, major does not mean anything. If the moon decides to hide its treasure then there nothing one can do. So we went back to the SVG moon. But it should not be. In the end we decided to continue our journey towards WP8.

We plotted a path of towards the outer rim of the galaxy. WP8 is just over 4,000 Ly away. So we have plenty of time.

After several 100 lightyears there was nothing interesting to be found. I changed the route to -100 Ly and set the filter to class FABO stars.

After about 300 Ly it payed of. We found ELW #41 which has a terra-formable moon half the size of the ELW. And a few systems further we found ELW #42. This was, after all, a successful day. 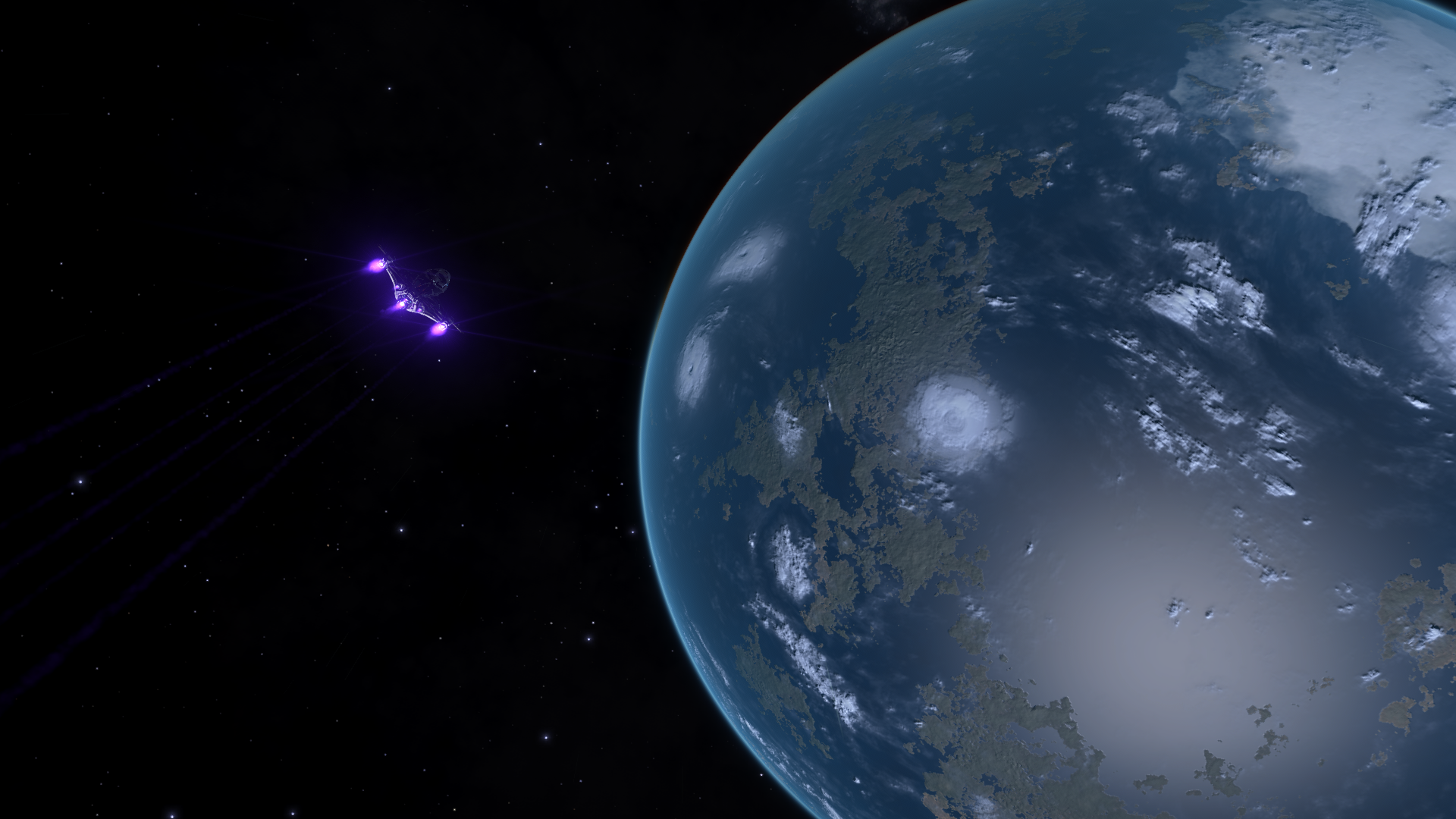 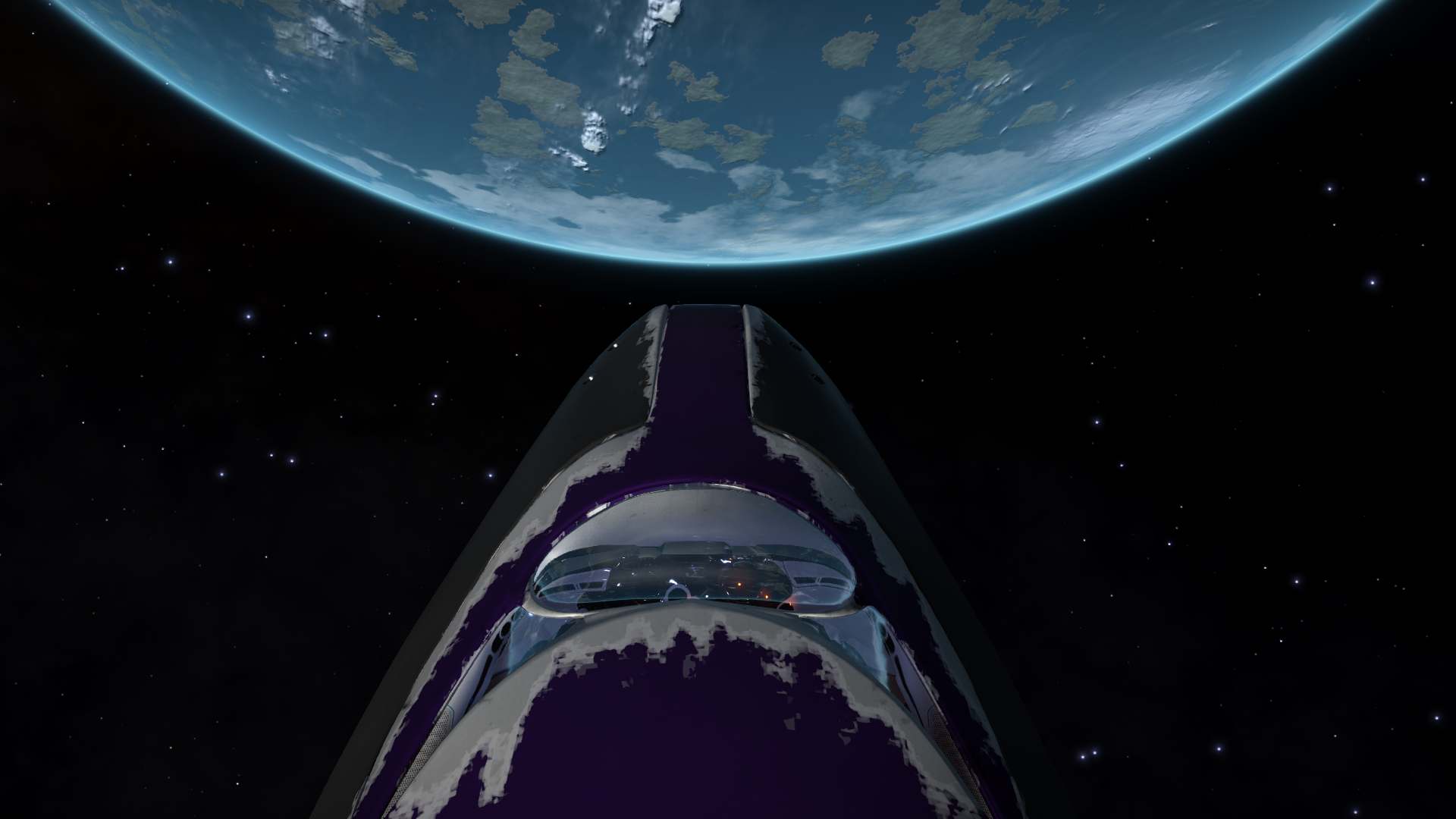 "Next time you let me fly !" said Hunter.

"Yes, that would be nice. But its not gonna happen." I replayed.

"Because those Way Point races are only for Commanders." I turned around and went towards to the shower room.

I lost the SRV and SLF race. Not so important, it was a lot of fun. That's what it is supposed to be. Fun. After thousands and thousands of light years in the void. Scanning for shinnies, geysers and fumaroles. Its a nice change.