It was named by the Galactic Mapping Project with the name of: Thomaski Point Memorial

Named in honour of CMDR Thomaski, a veteran of the Galactic Nebula Expedition of September 3302. CMDR Thomaski had a goal of reaching Beagle Point, and after several attempts he achieved that goal on June 3rd 3303 with only 9% hull remaining.

On his return journey to Colonia, sadly CMDR Thomaski (Bob) passed away. His last known location being Slaiyooe OX-L d7-0 on the edge of the Scutum-Centaurus arm after successfully navigating his way back across the Abyss and into denser regions of the Galactic Aphelion.

In September 3303 Universal Cartographics (Frontier Developments) deployed a memorial beacon at Slaiyooe OX-L d7-0 in honour of this intrepid explorer.

In late September 3303, an expedition to Beagle Point to honour the memory of CMDR Thomaski was organised by CMDRs Harry Palmer and Narzgul, and a flotilla of ships gathered at the Thomaski Point beacon before setting out to cross the Abyss. 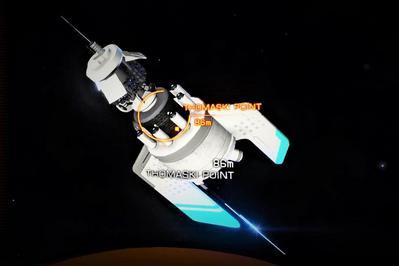