This system was visited for the first time on EDSM by Don Redhorse.

It was named by the Galactic Mapping Project with the name of: Sheol

217 ships passed through Nyeakue AA-A h31 space, including 0 ship in the last 7 days. 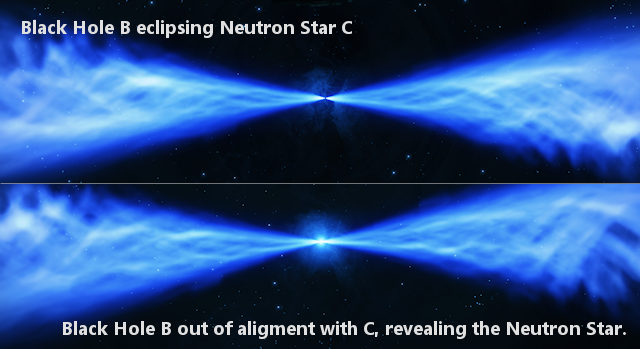 This system is full of death - stellar death, to be exact. A septuple system of 4 neutron stars and 3 black holes, with a 17 solar mass BH primary (A, with planets) orbited by a binary BH/NS (BC), a trinary (NS/BH)+NS (DE+F), and another NS (G), with a landable planet orbiting the binary+trinary (too far for a decent view though). The companion sextuple set is about 370,000ls from the primary BH though so be prepared for a long trip!

The BC binary BH/NS (4 MS/1.8MS) orbit eachother very closely, with only a 0.4 day orbital period which makes for interesting views - interestingly the BH actually does block the view of the NS behind it if they are aligned. The other DE NS/BH pair are more widely separated with an orbital period of 3.4 days, though the NS jets can be seen from the first binary about 1678 ls away! F orbits the DE pair at a distance of around 240 ls, and G orbits them all another 56,000 ls away.