It was named by the Galactic Mapping Project with the name of: Spear of Hope (Generation Ship) 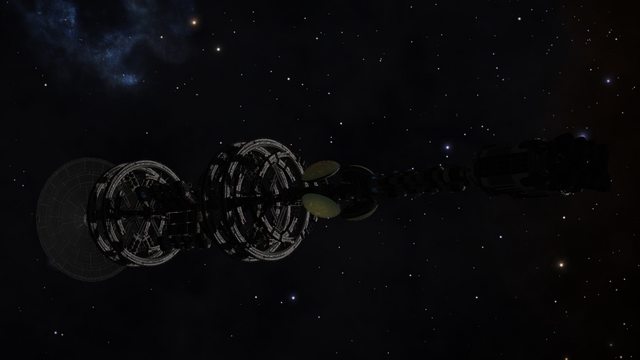 The Spear of Hope launched without a set destination, and instead depended on long-range "Pathfinder probes" to confirm the suitability of prospective colonization targets as it traveled. At some point, Technician Farrow departed the Spear of Hope alone in a shuttle on a year-long journey to repair a malfunctioning probe. Upon Farrow's return, he found the entire ship deserted. Data logs explained that the Spear of Hope's complement of 5,000 crew and passengers had staged an emergency evacuation eight months previously, when a viable planet had been identified which the ship was going to bypass. In the haste of the evacuation, Farrow had apparently been forgotten. With all other shuttles gone and no fuel left for Farrow's own shuttle, Farrow decided to try altering the Spear of Hope's course to slingshot around a nearby star in order to return to the planet. The only problem is that the trip would take 93 years, by which time Farrow would be 132 years old. As no planet in HIP 21654 is habitable or bears any signs of human habitation, it is unknown if Farrow's plan succeeded; the Spear of Hope either passed the planet again as intended and continued on until its power gave out in another system, or the slingshot maneuver failed and sent it on a different course.