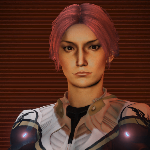 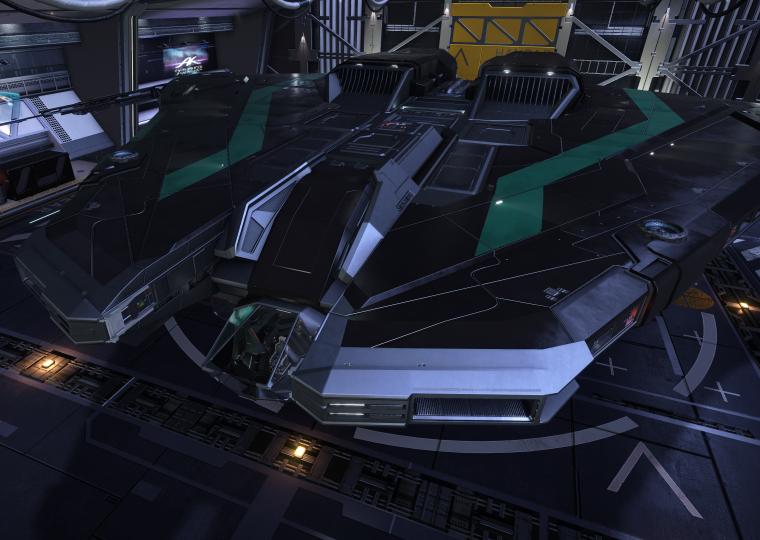 I finally entered Acheron region in the system Prie Bre QX-A c14-0. Stars are getting really scarce here, my jumps have very variable range because of it sometimes and that almost entirely deep black sky all around is not something for weak souls. I should be getting close to DSSA Alvin's Rest now, realtively speaking that is. It is still more then 1000 ly away from me, but I am cutting that distance away with every next explored system.

I am getting near the Acheron region, so it will soon be my last chance vor some sidetracking before reaching Voyager's Reach. I decided to plan this one out this time, so I set course for DSSA Alvin's Rest on the borders of The Veils and Acheron. I want to make some repairs there as well as sell all the cartographics data I have on me. Of course, near is relative term around here - it is still some 10000 ly away. Then I will have only Voyager's Reach before me - and entire way back of course.

I am officially past two thirds of my journey to the Voyager's Reach - and I also finally made it out of Arcadian Stream, this time for good (at least as far as journey there is concerned). I entered The Veils in Prie Aoscs TI-O b47-2 system, nearly 42 000 ly far from Sol. I should now just cross them into the Acheron where the Voyager's Reach is located.

As I am near two thirds of my journey to the Voyager's Reach, I made another stop for maintenance and some refreshments - this time at DSSA Callisto, Fleet Carrier cruising around the Phraa Blao HO-S c20-7 system little over 36000 ly from Sol. I must say, even though I have no use for them, these FLeet Carriers really do look majestic. 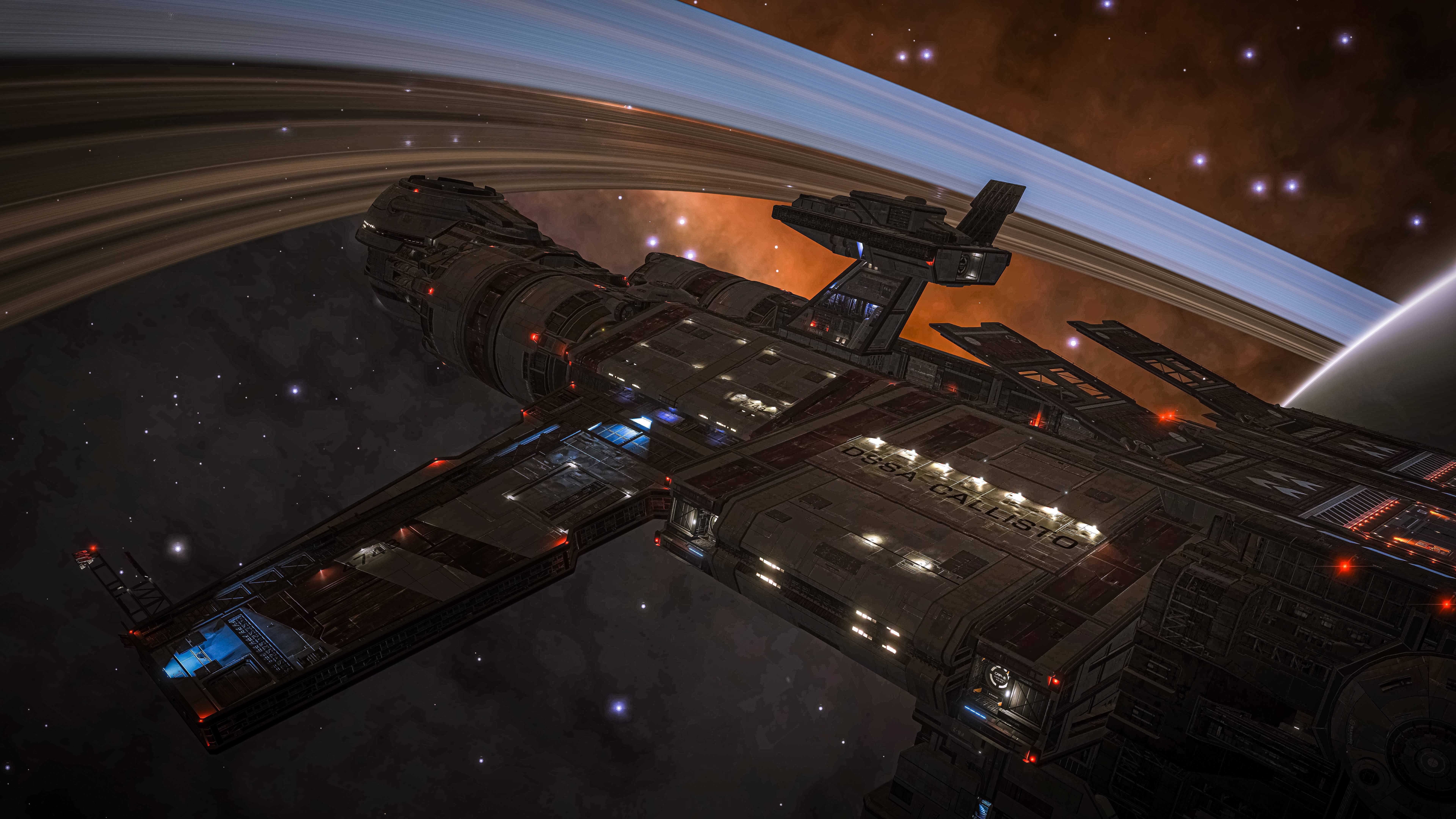 After that I set up the return journey to my original patch. Although DSSA Callisto was not far from my patch, I set up to meet her from almost 9000 ly afar so I will again skip several waypoints again. I should join up with my original travel plan at Hypi Bre IW-E d11-67 without any need to backtrack.

It seems someone is watching my journey after all - though I have yet to decide if he/she/it is making fun of me or wants to help. Shortly after I complained about being bored by Arcadian Stream and wanting some change, I suddenly and unexpectedly entered Empyrian Straits, in the system Sphaukea VD-A a96-6 - unexpectedly because both my last and next waypoints were in Arcadian Stream. Within a few jumps I returned back to the Stream of course, but it was a nice change nevertheless.

I have officially half the way to the Voyager's Reach behind me. On a larger ship it would be probably reason for some large party, but as there is only me on Natural Disorder, I just take pleasure in the fact that I made it here in one peace. It is more than 30000 ly journey after all, just with the jump power of my own Krait Mk2. It seems Milky Way celebrates with me though, it offered me a great sight on twin stars in system Phua Auwsy IX-L d7-609. 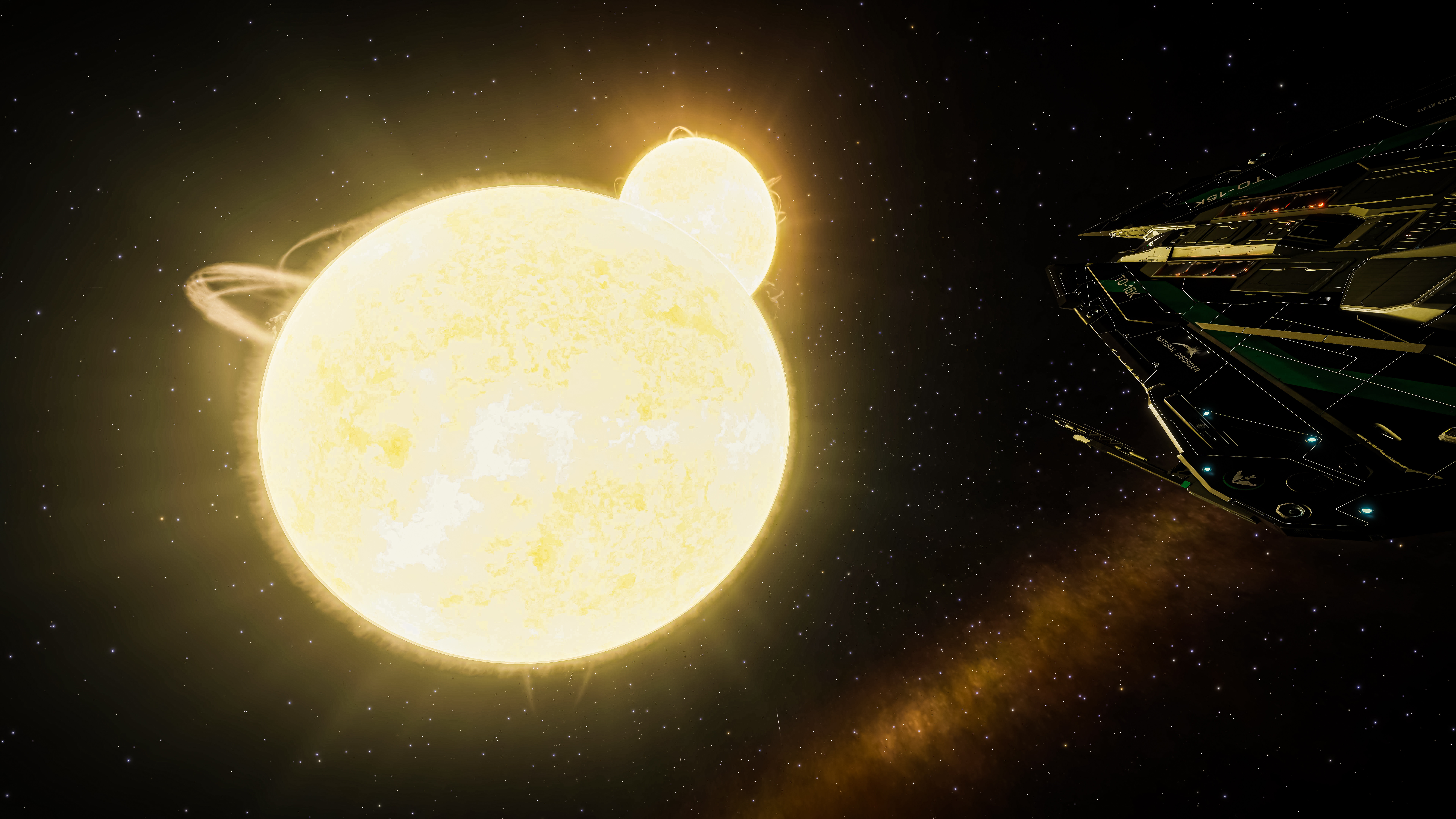 Otherwise I am getting a bit tired of Arcadian Stream region, I am here far too long. But at least the sky starts to look to what I am used to as normal now - less stars and more black. Wall of stars around the Milky Way core is now mostly behind me, and only the outer edge will await me now. I should probably make another rest stop on some friendly Fleet Carrier before I venture there.

As I am flying through Arcadian Stream, the wall of stars surrounding the core of Milky Way - and Sagittarius A in its centre - are my constant companion. I always planned to make an expedition there eventually, but now I wonder if Natural Disaster, my faithful Krait Mk2, will be up to what I will want from it in the future. WHenever I will lok at that wall, it more and more looks like a gates of an unpenetrable fortress to me. Partially of course, because the current 122000 ly long trip, while entertaining, is proving that for such long journeys I will perhaps need a ship with much longer jump range if they should still remain enjoyable - especially as I would one day want to circumnavigate the Milky Way.

I will of course not discard Natural Disaster, it has done me a great service and it is an awesome ship to fly around. But I have - for now as a mental exercise - began designing a long range explorer based on Anaconda, for journeys longer than 100000 ly. It will not be as maneouverable as Natural Disaster, but faster on the long trips and will be better able to sustain itself when I will not be able to land on station or Fleet Carrier, even for months at a time.

It will be a ship which will handle every single star and stellar phenomenas in that wall - as well as everything which lies beyond them.

I have named her Eternal Wonderer.

I finally managed to make my way into the system Greae Phoea XF-D d13-507, where the DSSA Totoro, DSSA project Fleet Carrier is stationed. While it does not offer refuelling, explorers usually have fuel scoops do it does not bother them (it definitely did not bother me) and pretty much every other service explorer might need can be found there, including some limited outfitting service. I sold all cartographic data I had with me (quite an amount by this point, including more than just a few first-discovered systems) and made all neccessary repairs and restocking. 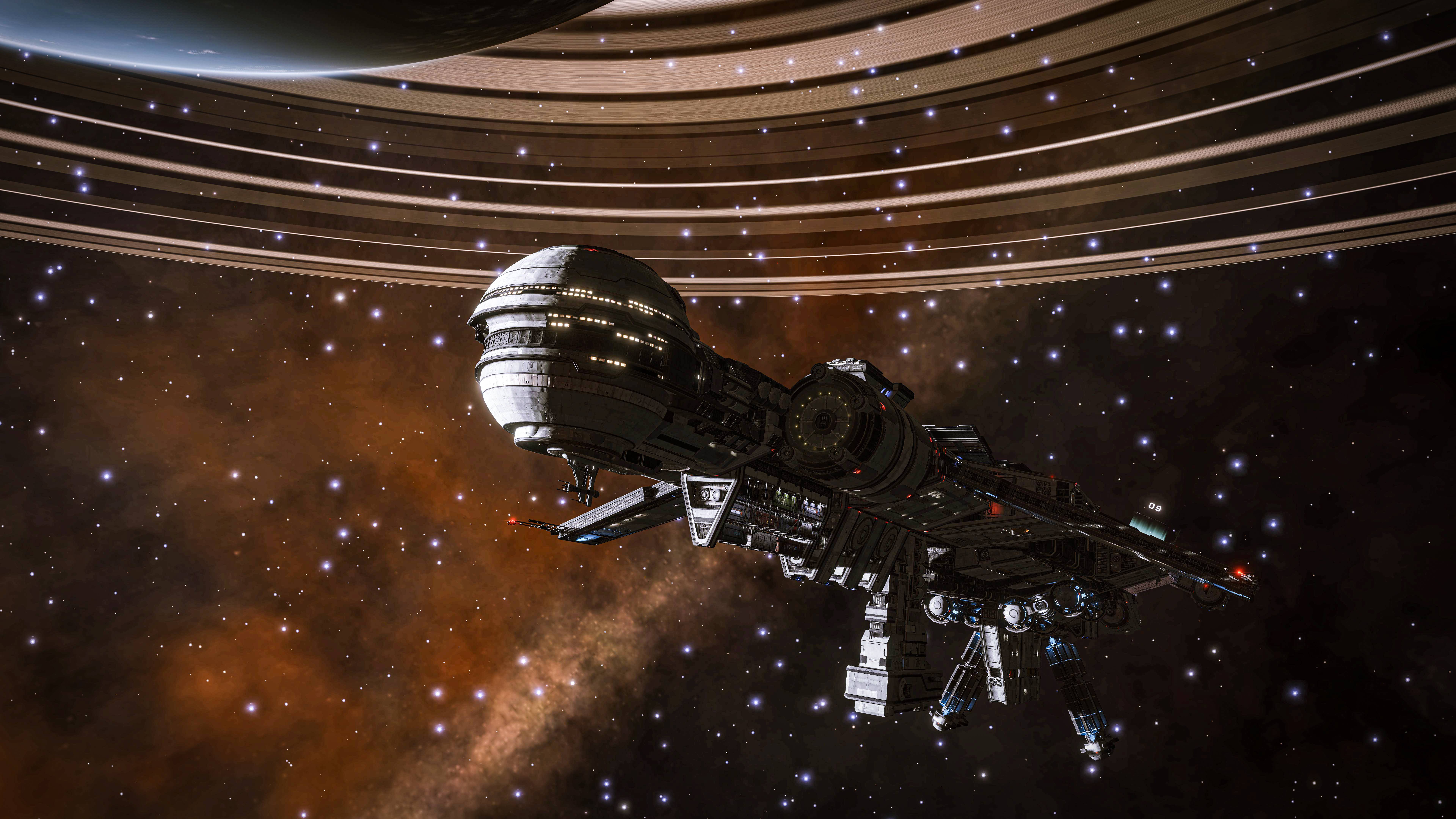 Now, restocked and refreshed, more than 17000 ly from Sol, I decided to skip a few of my original wayponts and head straight to the Oephairgh sector, as this made this sidetrip only little over 1000 ly detour instead of 4500 or so which would it be if I would want to return to my next original waypoint. Shortly after leaving DSSA Totoro, I entered another new region, Arcadian Stream, in system Eord Ploe TW-H b2-59 - but that is story for another time.

After making my way through the Norma Exchange, I finally got to use my AFMU (not that I was so looking forward to it) after an elementary mistake - I simply run into a Tauri star headfirst after entering the system. It was not really a problem repairing most of the damage by my own devices, but it was a clear sign that I need some change of pace, maybe stretch my legs a bit. I was scheduled to enter Norma Arm soon anyway, but driven by the need to change scenery I found new route to the nearest DSSA Fleet Carrier in Norma Arm.

Thanks to that I am now heading roughly in the direction of Colonia. Not that I actually want to head up there, just to the Fleet Carrier (at least for now, as I had not been there yet) but the change of scenery had been rapid and welcome. Norma Arm have much more stars and nebulae which brightens the view. That kind of makes up for more than 3000 ly long journey I have to travel just for this sidetrip, not to mention the path back to my original course to Voyager's Reach.

Norma Expanse seems to be mostly empty, at least as far as larger stellar fenomena or inhabited systems are concerned. These days most people clearly travel by fleet carriers or neutron highway and I was often the first to visit systems here. Norma Expanse does present nice view over the rest of the Milky Way though, including far away nebulae like Running Man, which can be often clearly seen reflecting in the background. I also stopped to enjoy sight of the Neutron Star in system Eodgorks CR-N d6-164, as it is stunning sight. I however did not use it to boost my jump. For me setting a destination is not a goal to be reached, but an excuse to get out there, and therefore cutting on travel time would mean less enjoyment from the journey. So after a while I just set out in my own normal speed. 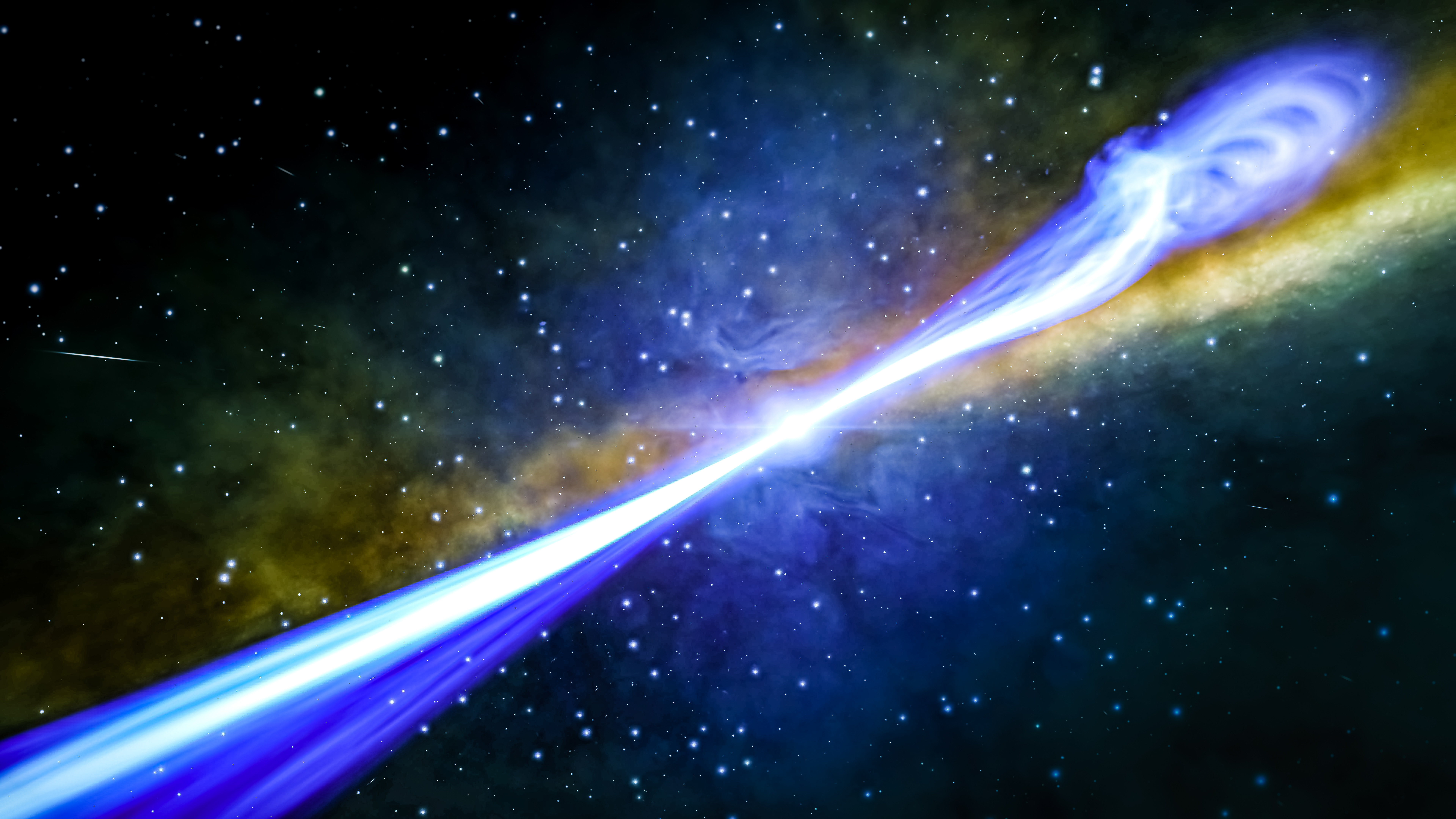