This system was visited for the first time on EDSM by Malenfant.

This system contains a Class V gas giant that orbits its white dwarf primary in only 15 minutes, and passes through the jet of the WD! Its orbital distance from the WD is 0.4 ls, so close that it cannot actually be reached using supercruise (the WD drops the ship out of SC about 2 ls out). There is also a nearby M V companion star a few ls away. As an aside, there is an unusually high number of Carbon Star systems around this location too.

The planet is so close to the WD that (a) it is within the WD's Roche Limit and should have been torn apart to form a ring system and (b) orbits faster than the WD's rotation period (which itself is only 16 minutes) and therefore is spiralling in to the WD anyway due to tidal forces. The system is also 7.8 billion years old - how the gas giant continues to survive, how it got into its current orbit around the WD, and how the WD and its planet both got so close to the M V star after the end of the WD's former red giant phase are all deep mysteries! 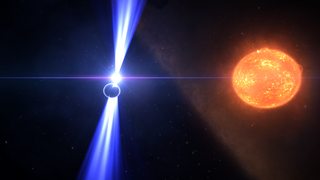