Beagle Point marks the end point of a galaxy-spanning expedition undertaken by Commander Kamzel in 3301. At the time, the system was known as Ceeckia ZQ-L c24-0, but Kamzel nicknamed it Beagle Point after his beloved beagle Jack, who had passed away a short time before. One year later, the system was chosen as the final destination of the first Distant Worlds expedition, resulting in an influx of over 500 pilots in April 3302. In recognition of these events, Universal Cartographics officially renamed the system Beagle Point on the 26th of May 3302.

In this system you can find all the materials for FSD Injections. This is a GREEN system.
Záznam letu

5078 ships passed through Beagle Point space, including 34 ships in the last 7 days.

5 ships passed through Beagle Point space in the last 24 hours.

Beagle Point, one of the most distant star systems currently surveyed at 65,279 LYs from Sol.

Unofficially nick-named 'Beagle Point' at the time by the exploration community after Kamzel's intrepid starship that first discovered it (DSS Beagle*), the system has subsequently become a point of interest that has been visited by many explorers conducting their own survey missions of the galactic outer rim regions. 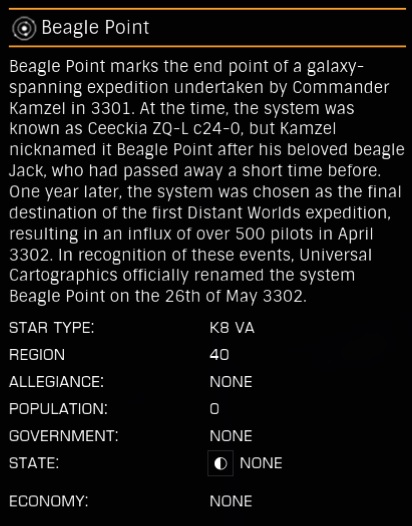 One year after the Distant Suns expedition, the Beagle Point star system was chosen as the final Distant Worlds basecamp, which saw the arrival of over 500 pilots during early April 3302. The Distant Worlds fleet, originally 1,300 strong, were tasked to map out the first galactic highway from Pallaeni to Beagle Point, a 81,500 LY route stretching through the galactic core, across the Aphelion regions, through the Abyss and the Solitude Void, and finally to the Ceeckia sector in which Beagle Point is situated. Despite its remote location, Beagle Point thus became the center of several social events organized by the exploration community, including SRV rallys and air shows.

Why Beagle Point? Beagle Point was pretty much the furthest system an explorer could reach during the very early days of deep space exploration - a period when automatic route plotters, engineering upgrades, and Jumponium fuel did not exist. In addition, explorers back then were primarily flying Cobras and Asps, and 35 LY jump ranges were considered 'extreme range'.

Beagle Point was therefore the final system reachable for those kinds of ship ranges along the route taken by CMDR Kamzel, and thus the end point during the first galactic crossing expedition - which culminated in mid-January 3301.

When Universal Cartographics increased exploration payouts in late January 3301 and introduced the 1,000 LY plotter, Anacondas became more affordable and within weeks were the ship of choice for a lot of deep space travellers due to being able to push the maximum jump-threshold up to approximately 41 LYs - thus making the systems beyond the initial 35 LY max jump ranges reachable. As a consequence Beagle Point's significance and historical background for being the furthest reachable star system no longer applied and it instead became more noted for being the final system of the first ever Galactic Crossing, during a short period when Asp Explorers reigned and no 1,000 LY route plotter was available to help chart a path to it, or to the stars beyond.