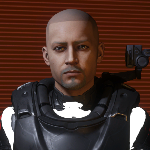 Due to a few things, I am going to keep with my Inara Account for Journal Entries. With the amount of time it takes to re-edit (markup is different here) it is easier to leave things in one location.

Reached my mini-waypoint and filled in three more Codex entries in one area; 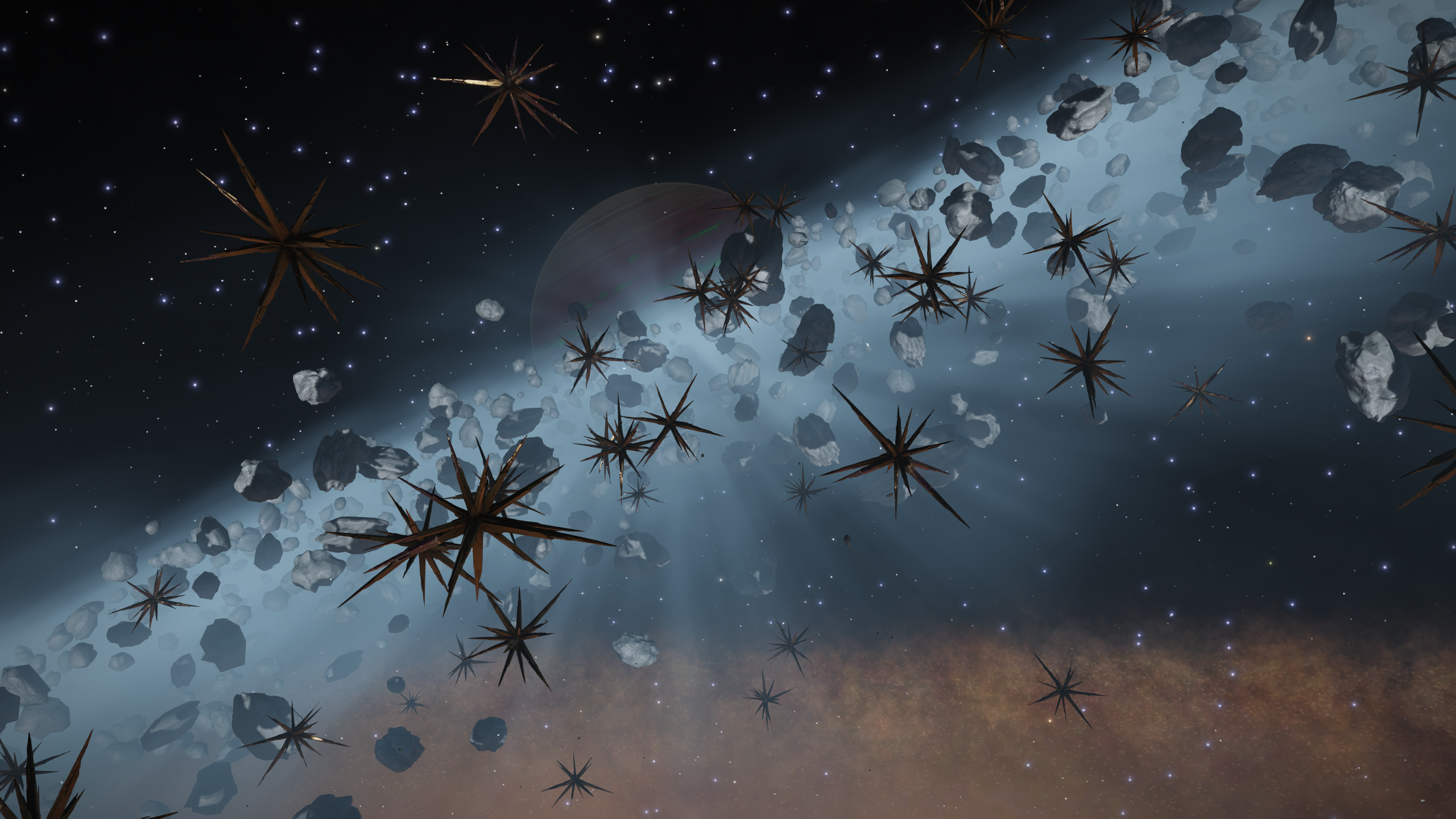 Flavum Metallic Crystals and in the background, Water Giant Class 1 with Luminous Clouds 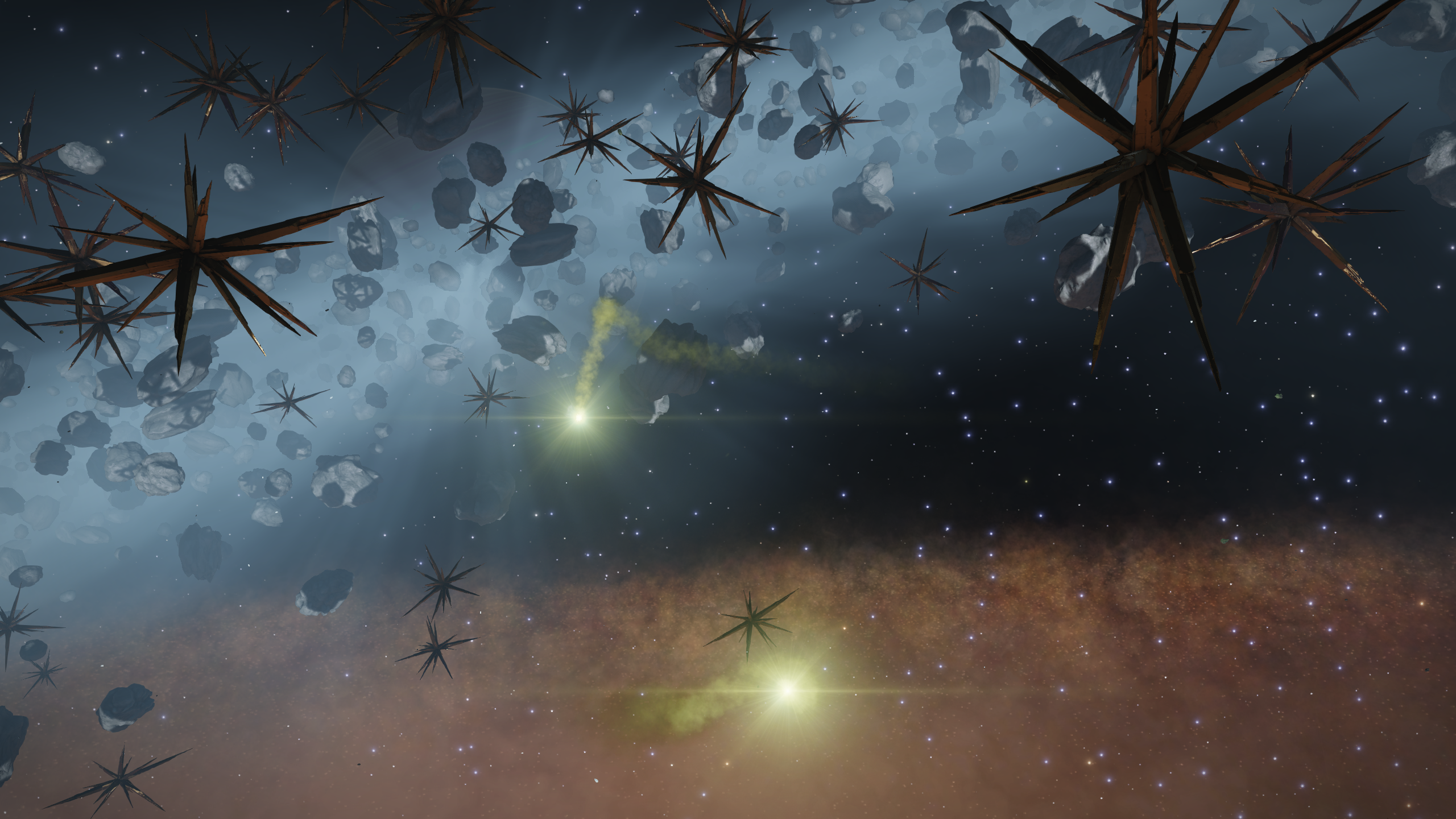 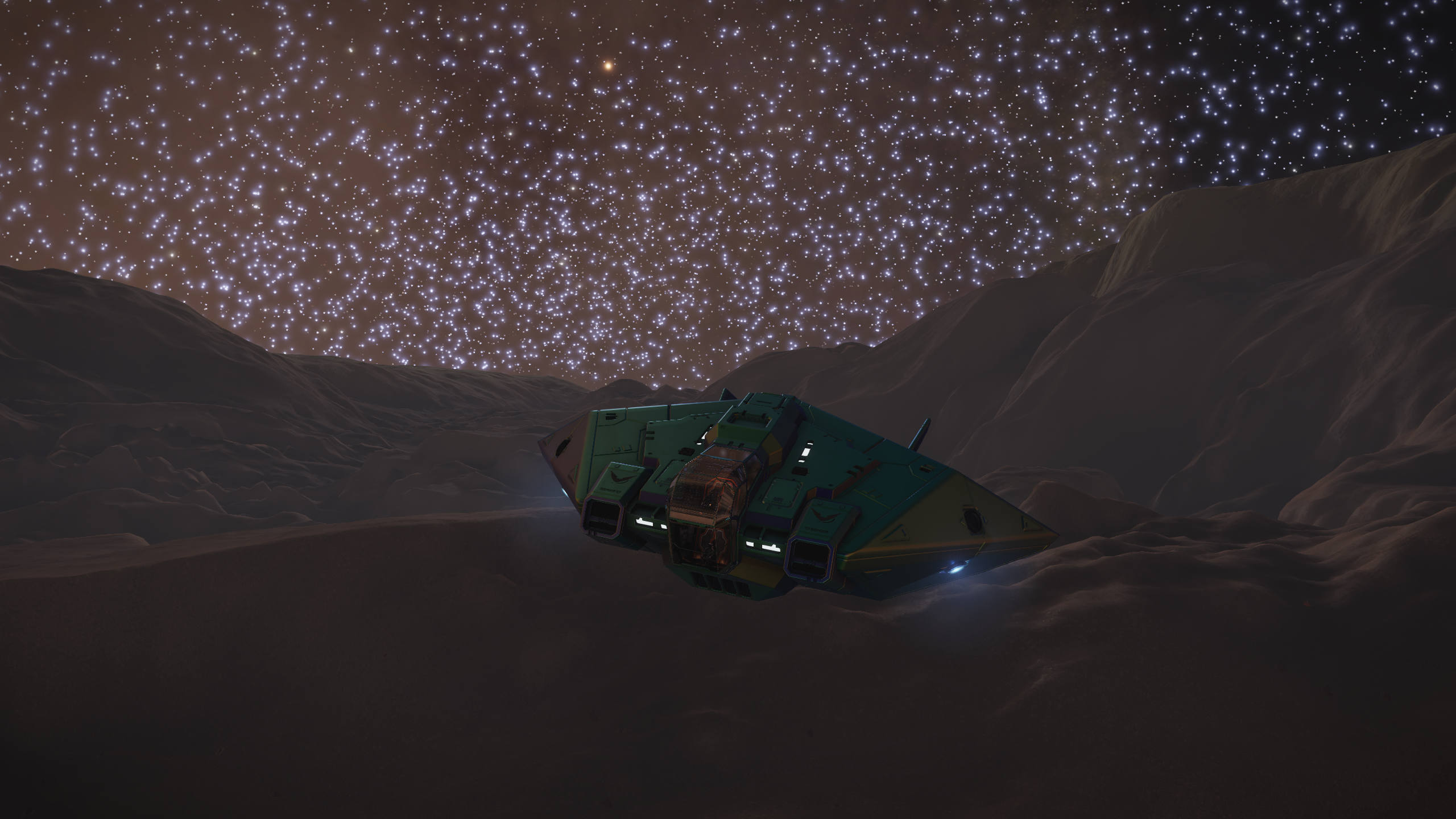 Cashing in on Ammonia vents before going back down towards Perdix Legacy. Note the galactic core in the background

32 Jumps to Perdix Legacy where I will take more pictures, map the system in it's entirety and cash it in at Explorer's Anchorage. Having Neutron Star jumped, I realized that the same density existed on the way back, so rather than 32 standard jumps, Perdix Legacy is now only 14 Jumps via the Neutron Stars.

At Neutron Jump 12, I officially entered the Galactic Core, home to Explorer's Anchorage, a major waypoint on my journey back.

Finally Perdix Legacy. I mapped the system and still marvel at it. The Hot Jupiter is so close to the Primary Star it orbits it every 7.2 hours and has a more "Egg-Like" or Oval appearance. What is surprising to me is the absence of a ring of burned off atmosphere that this planet would have flowing into space behind it as it orbits the Star only 4.03Ls out (Nav Beacons are 5-7Ls). Another mystery for another time. 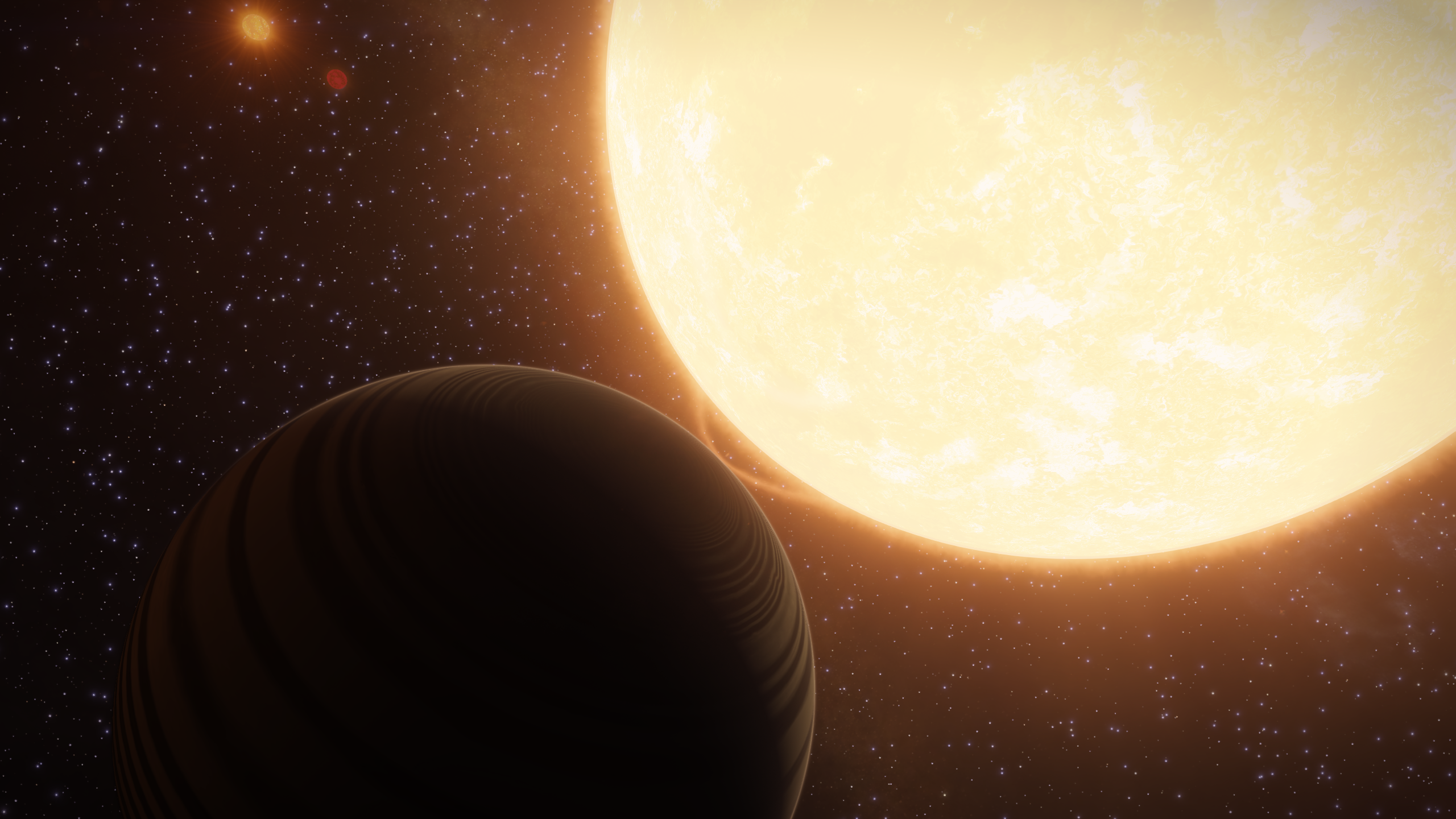 Perdix and three of the main stars showing in the picture.

66 jumps to Explorer's Anchorage. While I have been filling up the Codex Entries for the region, I hit a patch of systems (10 or 15 jumps worth) of simply nothing but stars. Getting tired, with 28 Jumps to go until Explorer's Anchorage I decided to call it a night.

Here are some stats:

35 Jumps to go before my mini-waypoint which is a Codex Entry unique to the region. Incredible amount of systems out here, then again, the star density is just as incredible. 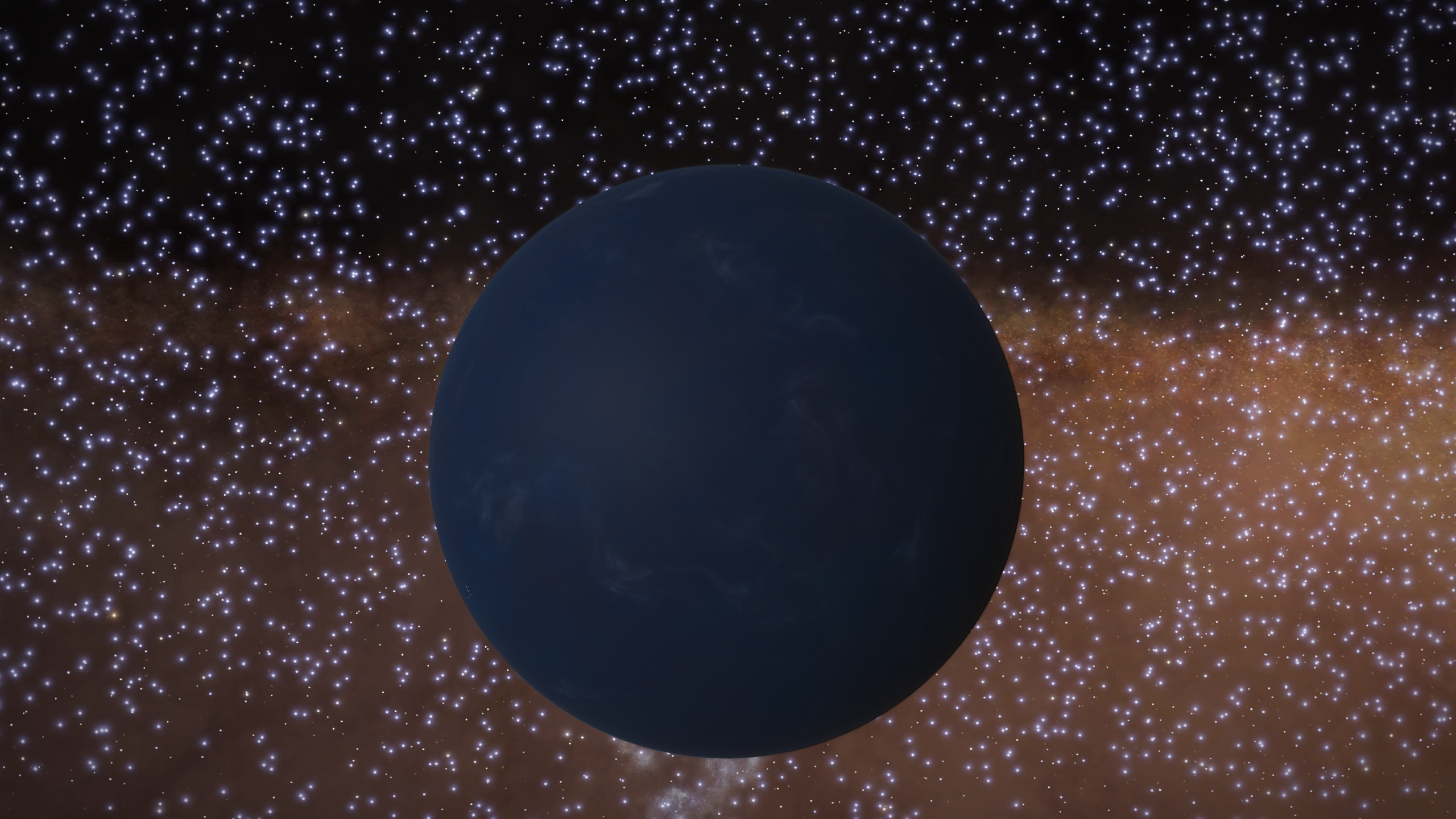 A Water World well above the Galactic Plane

One of the CMDR's I know (Darion Rothgar) is currently in Colonia. According to the Nav Computer, he is 15,300Ly away, so finally a CMDR I know that is close (relatively speaking). Unfortunately, as I kept stating, the longer part of the tour begins after Explorer's Anchorage, but I believe will be the most interesting part of my Longer Voyage Home.

Made it to Dances with Giants, which was also Waypoint 4.

One system I really wanted to photograph and spend time exploring. This was also Waypoint 11 for the Distant Worlds 2 Expedition of 3305. I spent whole of 10-20 minutes here on the DW2 Expedition, this time, it was closer to an hour.

Managed these shots (by far my favorite ones and the only ones I kept); 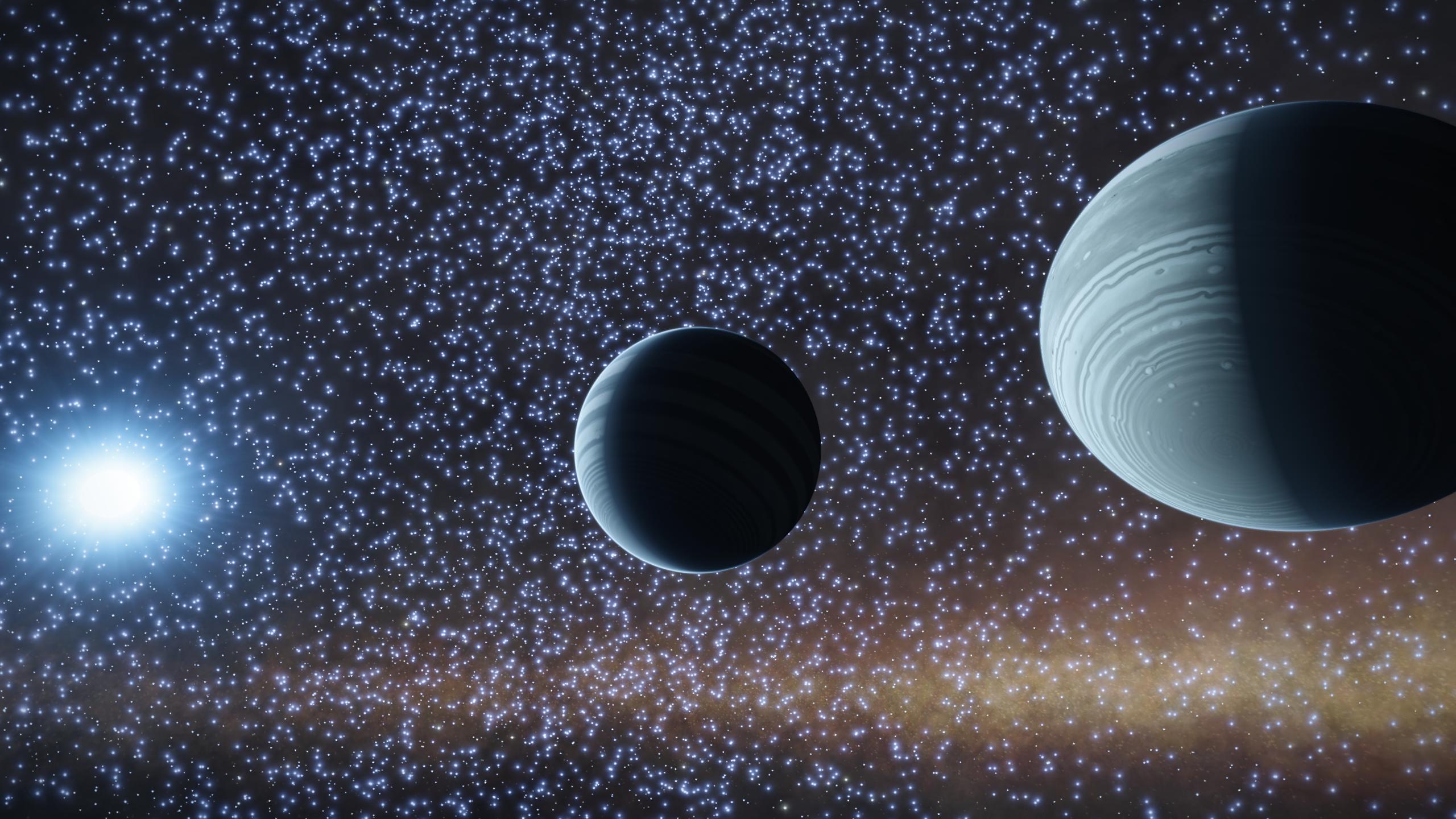 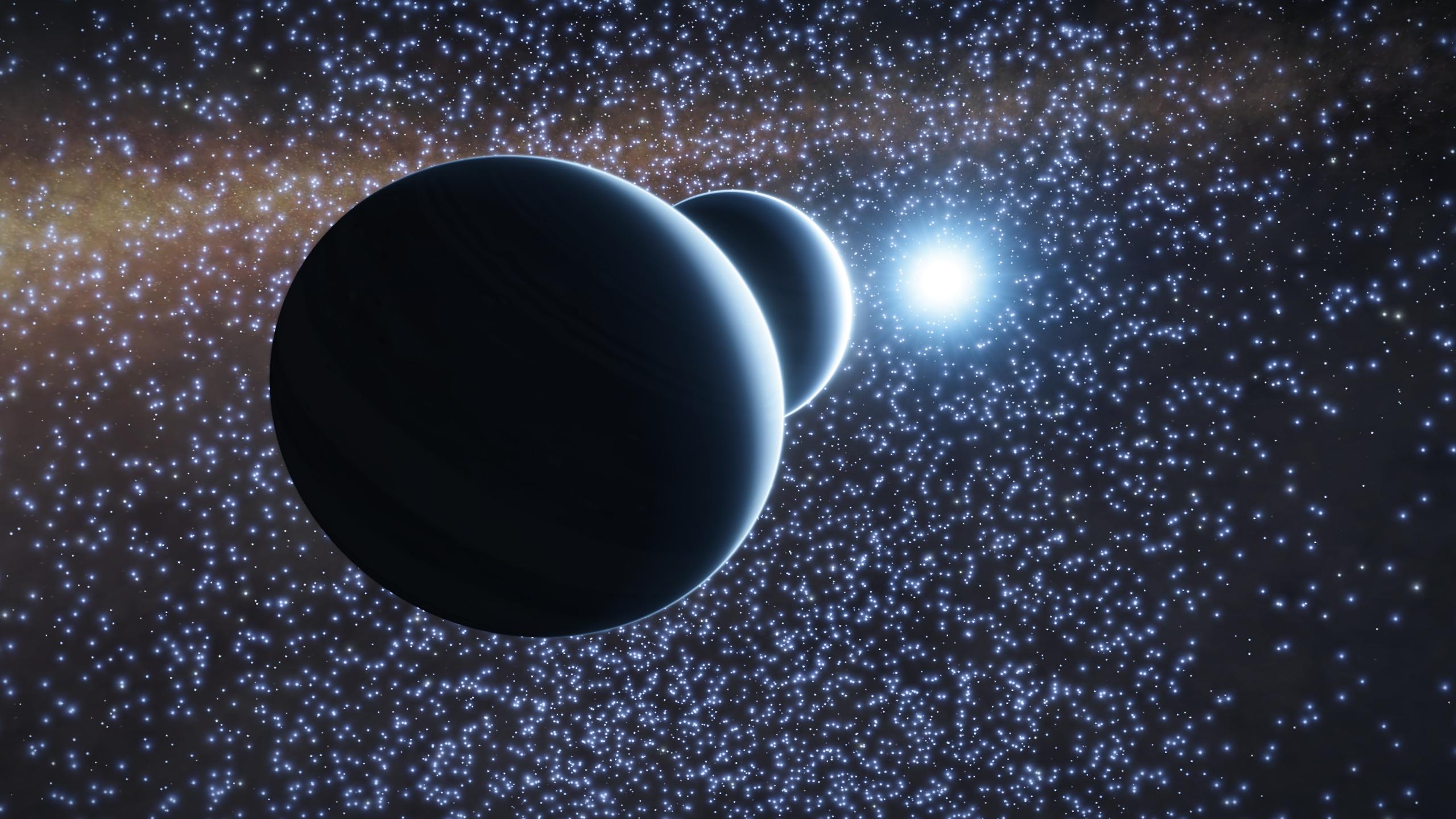 I flew around trying out different angles and shots (still want to capture the famous Double Sunrise) and saw of the sights of the system. Some stats:

I am taking a course deviation (78 jumps or 3900Ly) from Waypoint 5 (Perdix Legacy) to hit a Codex entry that is almost on the Galactic roof. Should be some interesting picture opportunities when I finally arrive. From there, back down to map out Perdix Landing which is Waypoint 5. When I dock Explorer's Anchorage (half way) I will divulge my GMP submissions along with officially entering them as candidates.

Right now, I am officially 34,500Ly away from the Bubble, which means around 10,000Ly from Colonia but things are around to take a drastic turn, this is the going to be the longer part of the journey.

34 Jumps to go and I officially entered Ryker's Hope region. The sky is full of stars... coming from the inky black of Beagle to almost the Galactic core.. major difference and sometimes a visual overload 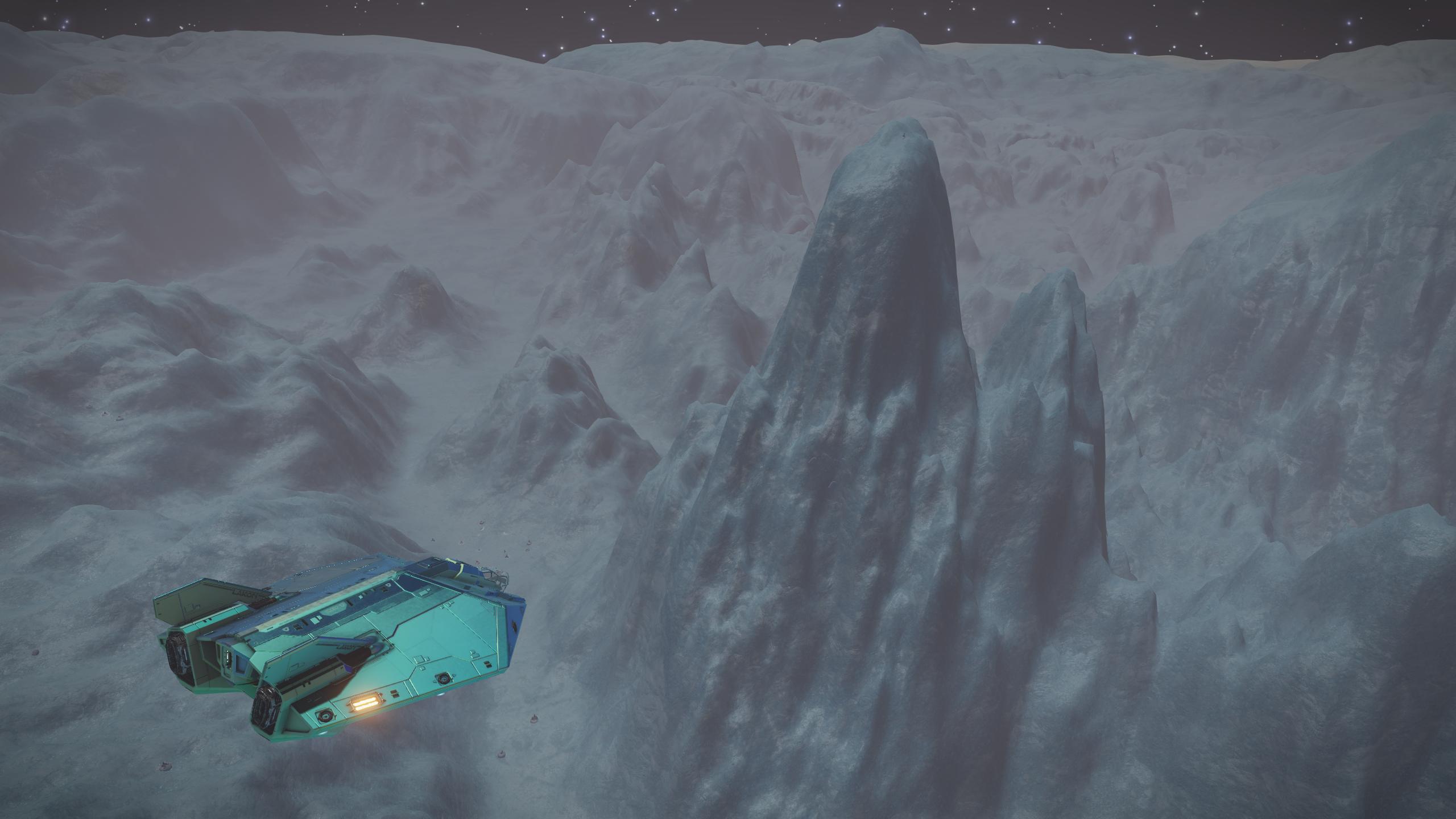 All the canyons on this planet had these

Running into systems with many bodies and things to check out. 38 jumps normally would take no time at all. So far, 2 days.

I am one tired Explorer. Made a few jumps, avoided a few mishaps, decided it was best to call it a night.

I managed to reach my mini-detour this evening. Before hitting my destination, I managed to find this wonderful sight 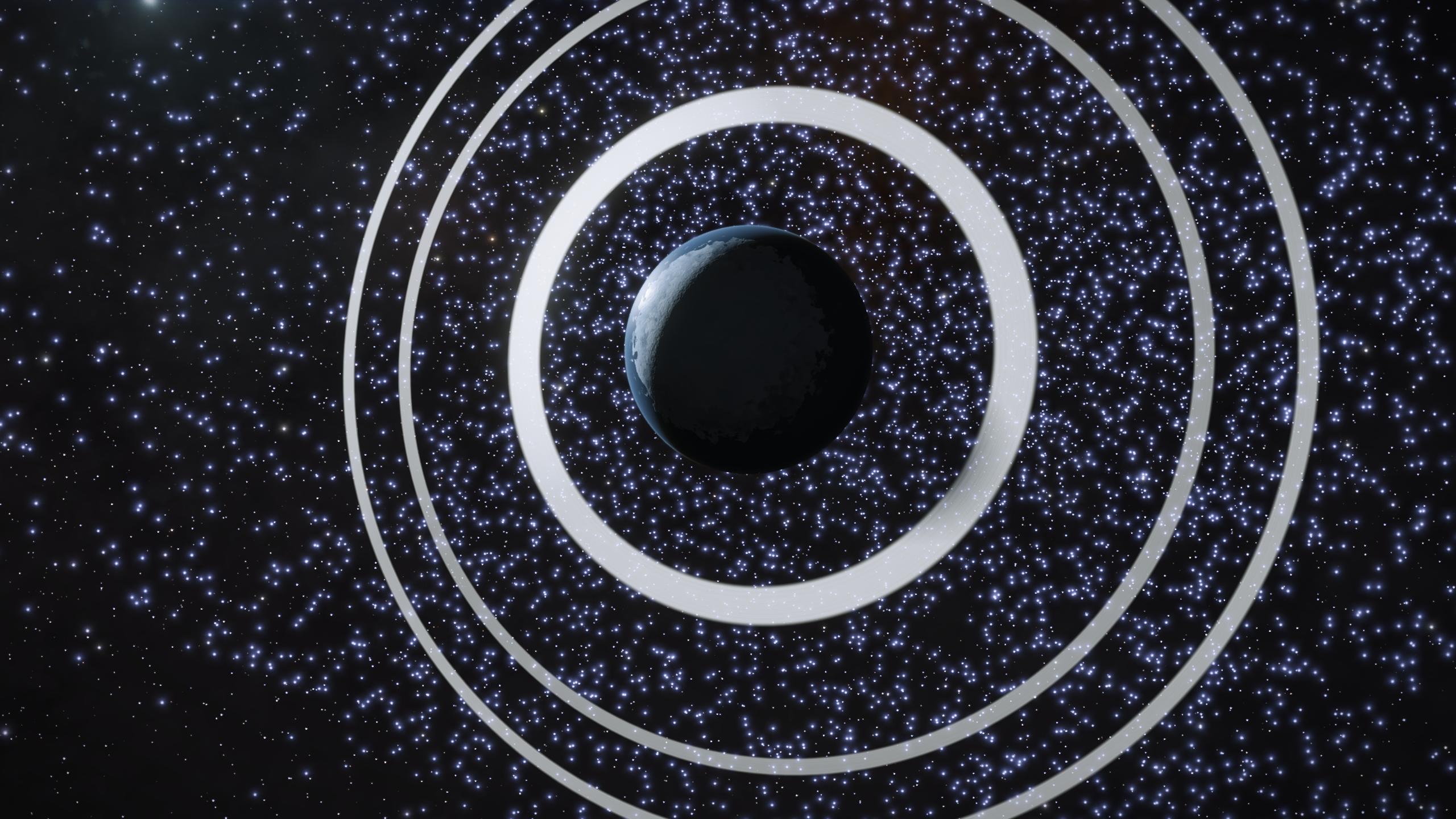 A ringed Water World with an "A" Type Star close by reflecting enough light to make this almost a bullseye!

My destination was a Black Hole on the fringes of the Izamani / Ryker's Hope region. The Black Hole itself is inside a small Nebula which I cannot find the name for (looks like a Rose or Poppy). Either way, right next door was the DSSA Pegasus. 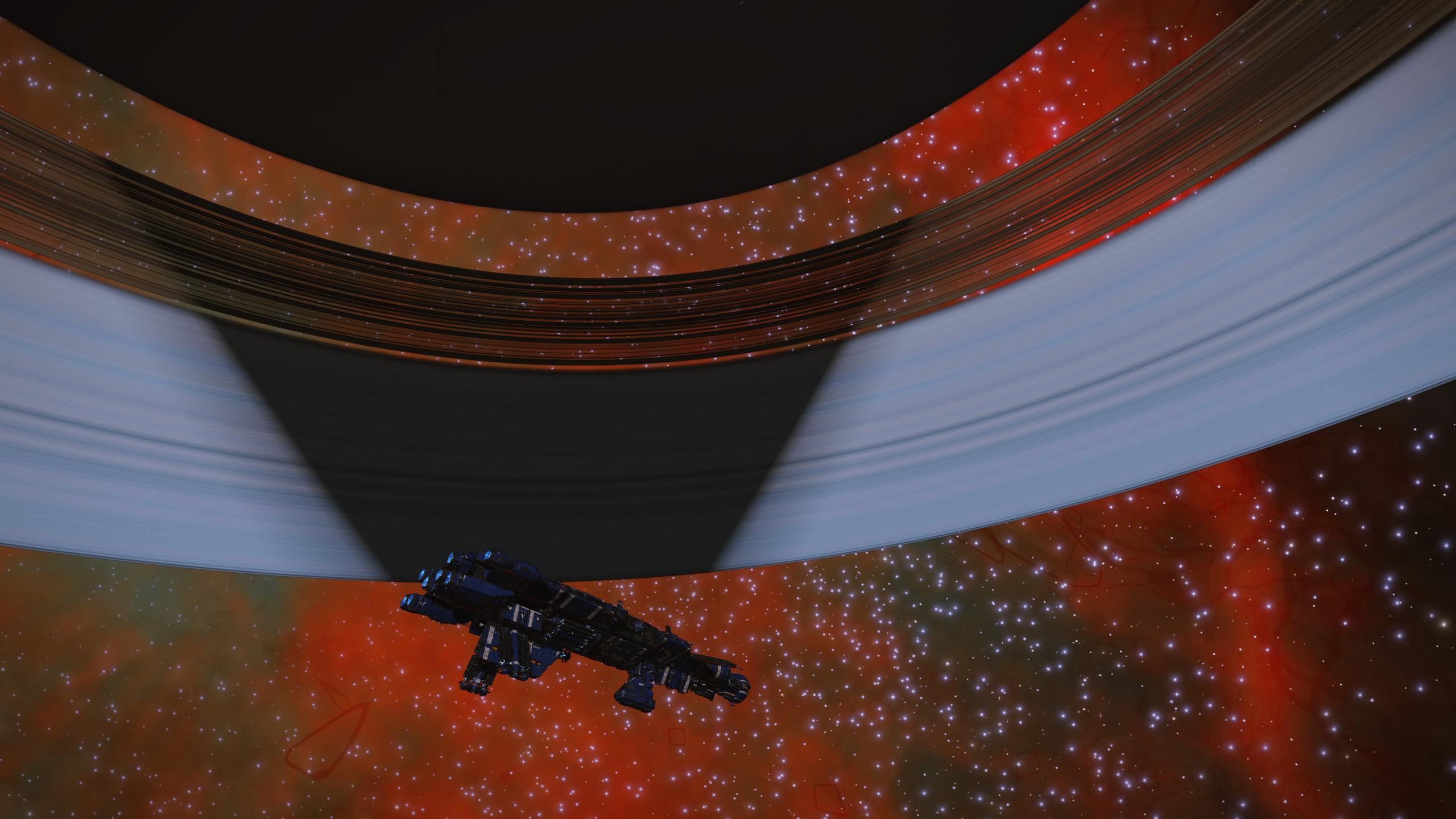 DSSA Pegasus. What a scenic location! Underneath a Ringed Ice World with a Nebula in the background

I decided to cash in on the Exploration Data I already had.

Waypoint 4 is only 47 jumps away. This was a nice little detour and I managed to lock in the Tri Aquari System for the GMP. I plan to do both systems (Tri Aquari and Perdix Legacy) when I reach Explorer's Anchorage. While I am getting closer to the Bubble, I still have a long way to go. The longer part of the journey starts after Explorer's Anchorage.

Made Waypoint 3 this evening, the Morphenniel Nebula. 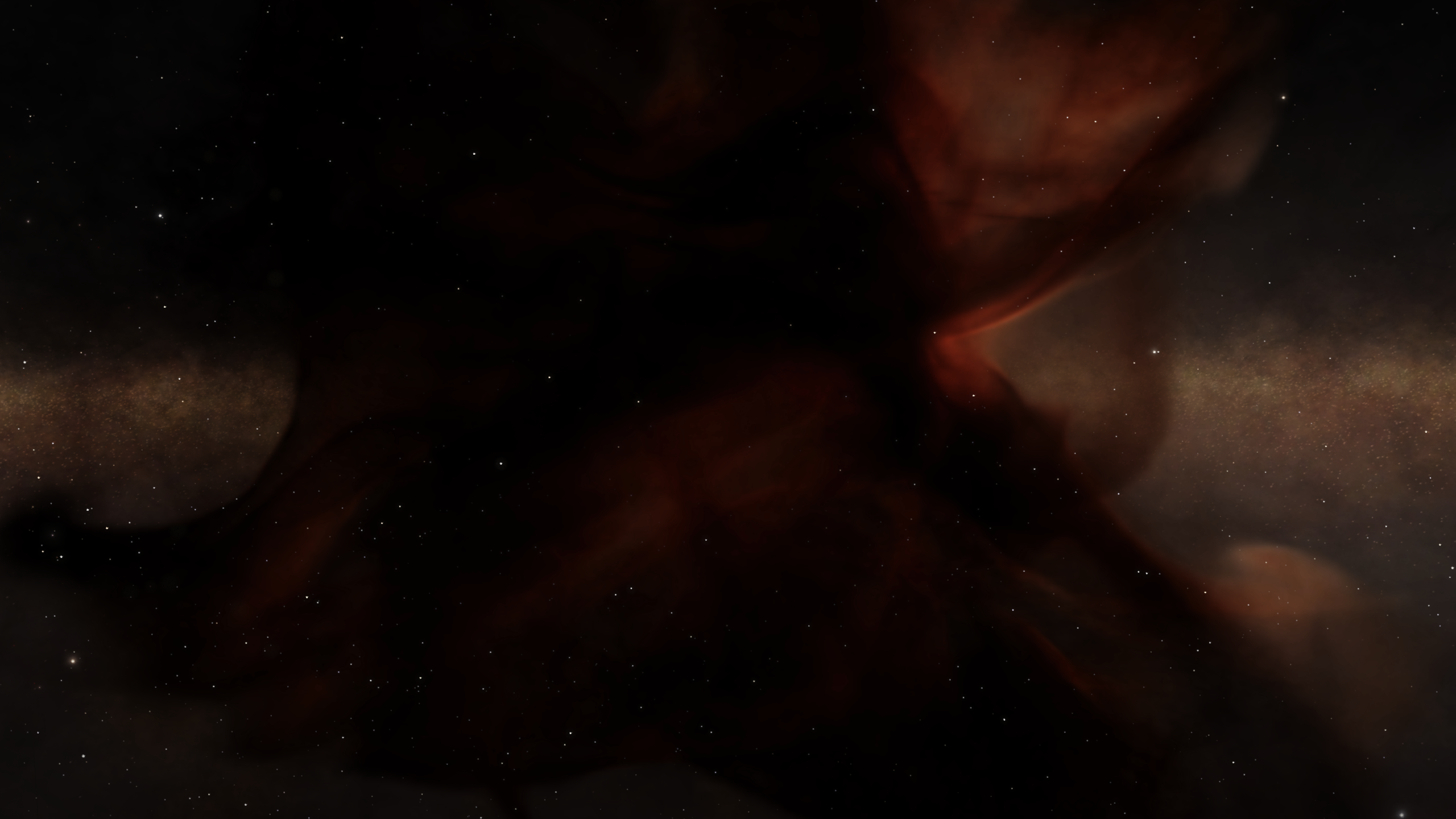 Situated just 1,000 LYs from the off-limits Bleia Nebula, Morphenniel is the closest visitable nebula to this mysterious sector or space.

This nebula has a bright orange-white tip that falls away to darker orange and red colours, which from some angles resembles the tail-fire of a rocket, hence the name.

It is fairly small, being about 40 x 30 x 30 LY but occupies an interesting location. It is located 670 LYs below the Galactic Plane and 2000 LYs from the Magnus Nebula visited by the Distant Worlds Expedition (Waypoint 17).

It has few hot stars, most being cooler K and M types - the system closest to the centre is a Y dwarf circled by icy worlds devoid of any atmosphere but illuminated by the deep red colours of the nebula itself. 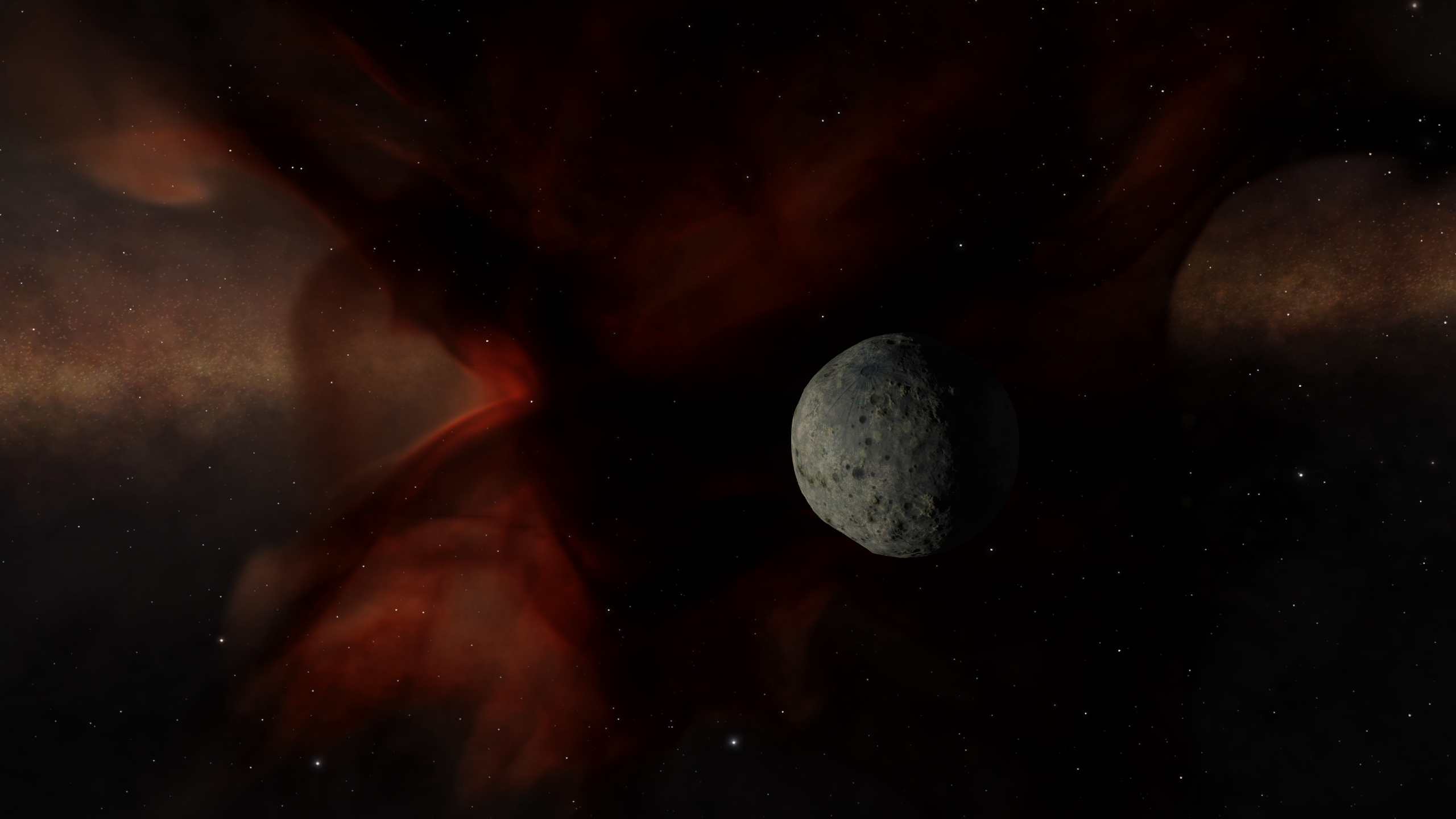 The Trojan Planet 2 D A

The nebula reference star system has a small biologically and geologically active Trojan Moon (Planet/Moon : 2 D A) with striking surface features, one being a double impact crater shrouded in a thin haze and surrounded by large mountain ranges. The crater is located at: -27.10/-142.00 (150 KMs along bearing 270 from BioSite #1).

As always, any systems within hundreds of Lightyears from any Point of Interest has already been discovered and mapped extensively. I have plotted a small 38 Jump detour to take care of another Codex Entry before moving onto Waypoint 4 from the detour.

I plan to poke around the system for a bit, super cool and the photo opportunities are endless.

I had a decision to make. A metric ton of neat Biological Codex entries exist in this region of space. Most are located 5,400 Ly from my current position. Considering hitting Waypoint 03, and then making a major detour to hit these Biological (Lattice Spheres, Space Mollusks, E13...) sites and then detour back. The problem;

This will definitely add a significant amount of distance and time to an already "Longer Voyage Home" not to mention really moving me out of the way from the pre-plotted Waypoints that took a week to layout. As tempting as it is (and lord knows I will struggle with this until I reach Explorer's Anchorage) I believe I should stay the course.

1000 to 2500 Ly detours I can live with. They still keep me where I need to be and within reach of the Waypoints I methodically plotted. 3000+ is well, pushing the limit, 5000+ reserved for another time. It's not like they are going anywhere.

With 39 jumps go before I hit Waypoint 3 I am calling it a night. Why is it taking me so long? Codex Entries along the way. I plotted these routes as I stated earlier with Codex Entries in mind. Some have been nice surprises some have been annoying (Water Geysers, for the love of me, requires all my energy and patience) 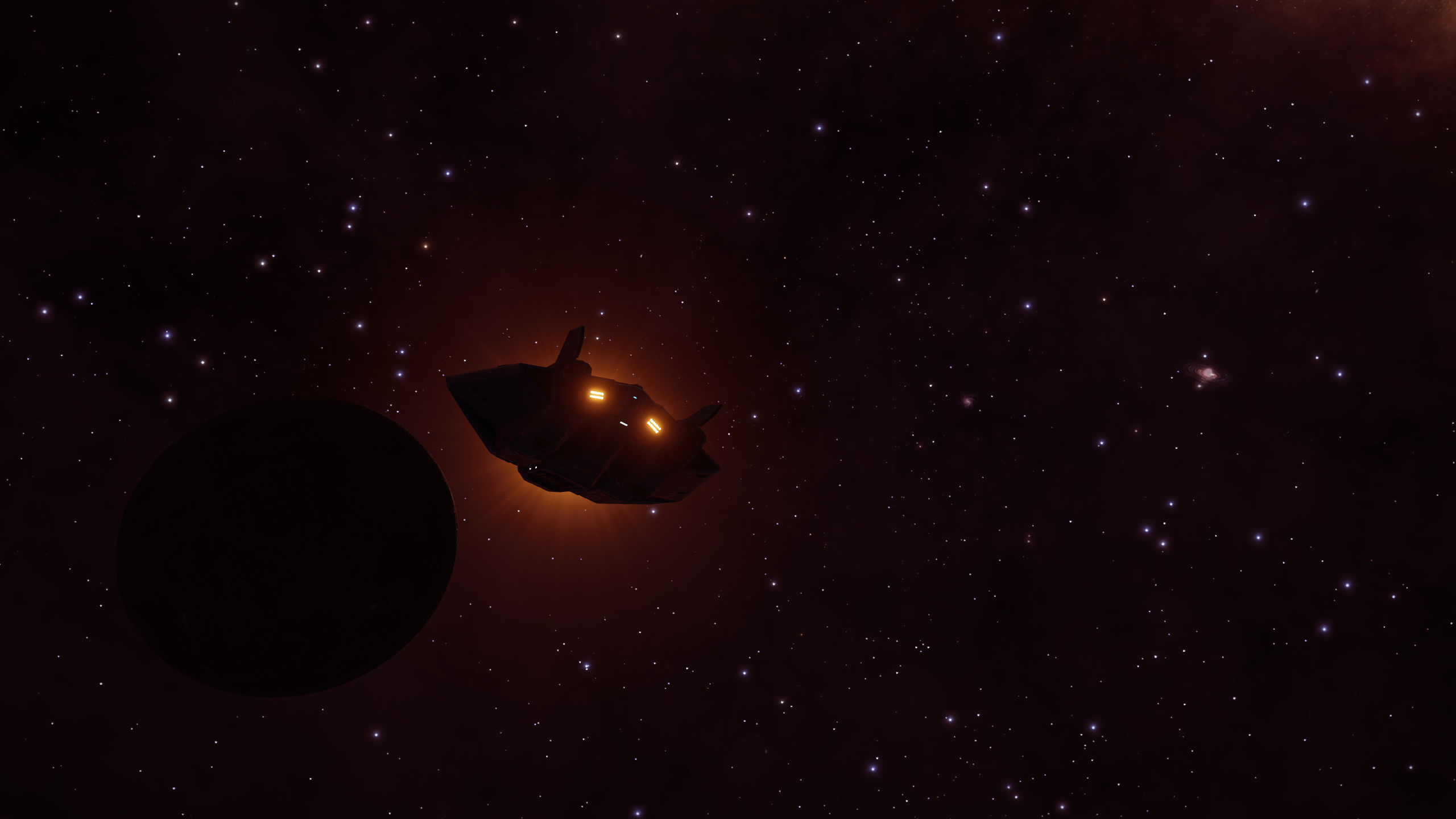 As you can see, Stars and at the top right hand corner, the Galactic core just peeking into the picture. According to my Nav Computer, just under 40K Ly from Sol. Soon, another change of direction begins. LHS 197 is still a long way away.

84 Jumps to go for Waypoint 3. The current route I am is pretty lacking. Many systems mainly just one or two stars and even more with just four stars.

I did manage to hit a system with 61 bodies in it, and while quite a bit, the variety was a little less special than I thought it would be. Decided that this will be a good place to stop until tomorrow morning. My goal is get to Waypoint 3 before Wednesday. If things continue the way they are going, not an issue.

Codex entries are seemingly full, Water Geysers and a few seem to elude me, that is, until I return.