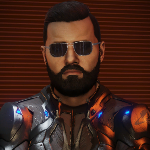 I arrived at the final ATEG waypoint, WP15, a few days ago. I had planned to join a meetup, but timezone differences meant I missed it. 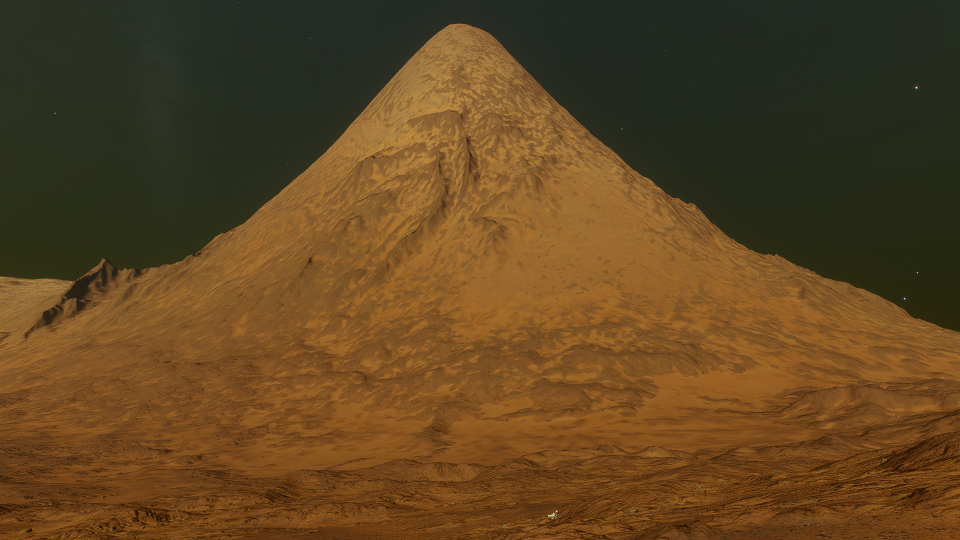 I was a good drive up, taking about 15-20 minutes. I also found three samples of the final biological species I had been struggling to find elsewhere on the planet.

The view from the top was nice and included the 'parent' gas giant. 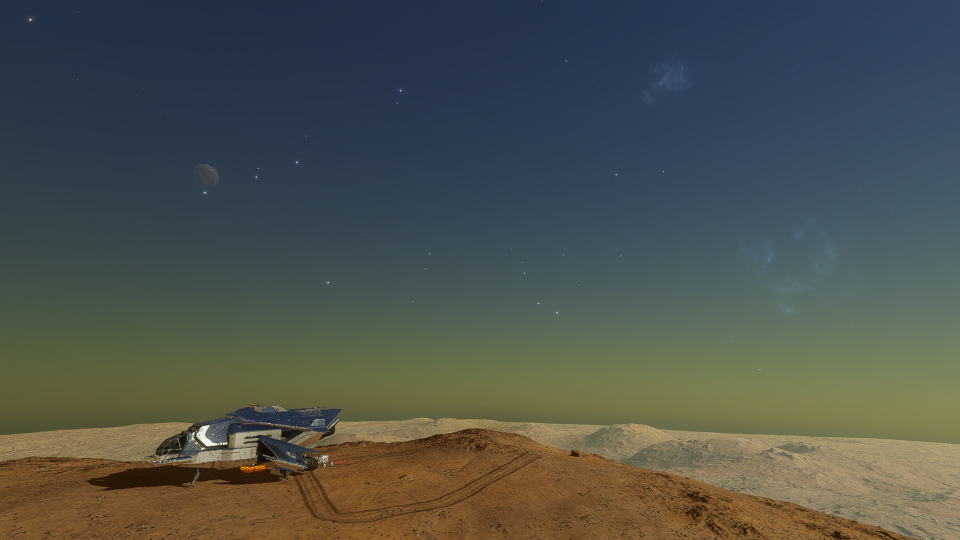 Tomorrow night I will start my return trip to the 'Bubble'.

On arrival at WP9 I discovered that my carrier was in close orbit around the entry star (Dehue WV-M d7-27 A - a class A blue-white star) - well within fuel scooping range! 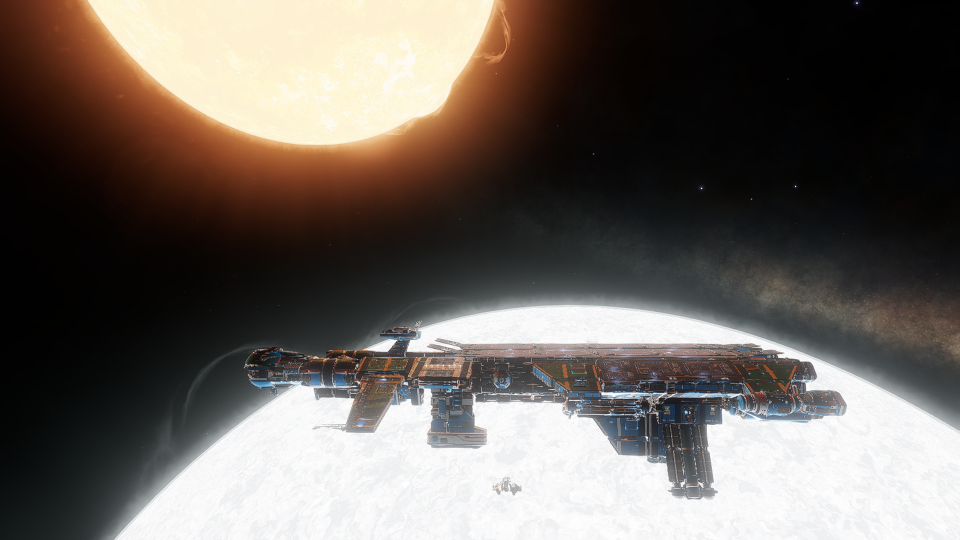 It is in close binary orbit with Dehue WV-M d7-27 B - a class G white-yellow star. That pair in turn are in orbit with a second pair of class A and G stars ("C" and "D"). There are a couple of class Y brown dwarves in the system too.

One of those had a moon of a moon of a planet that had not been mapped in EDSM (Dehue WV-M d7-27 ABCD 3 d a). I have a personal policy of filling in data gaps identified by the Canonn EDSM plugin. When I got close to the moon I found that it had large areas of deep canyons, in this case spanning a crater. 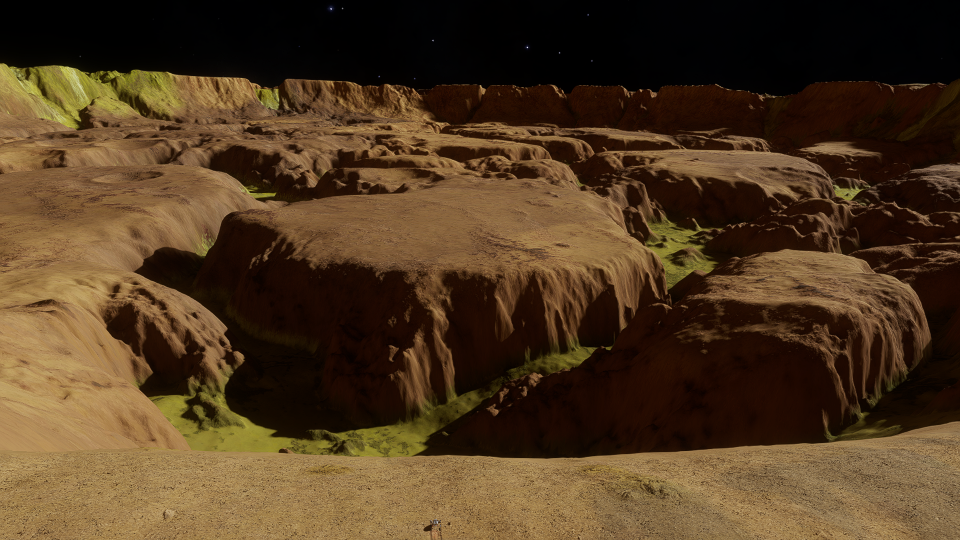 Of course, I had to get out in the SRV and go for a bit of a drive! 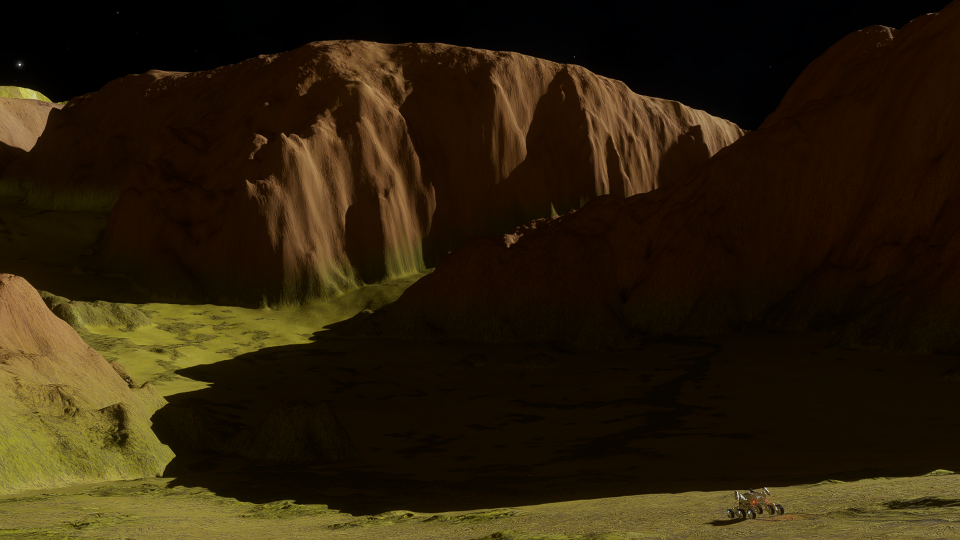 On leaving the GGG I made for WP7. On entry to the system I found about five other carriers in orbit around a ringed Earth-Like World (Ploadao OI-T d3-21 5), so I decided to join them! 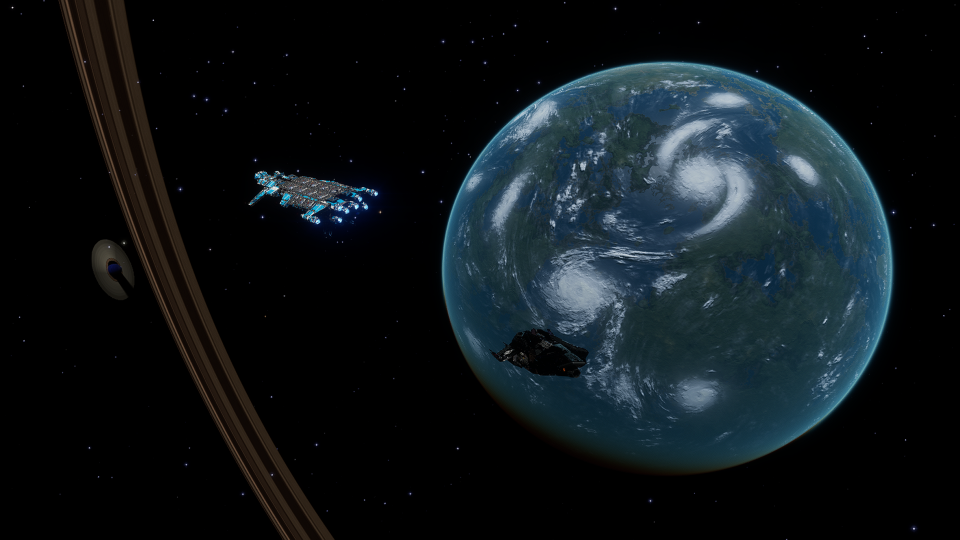 Some IRL travel forced me to spend a little extra time in game at the GGG, but today was the day to move on. I popped over to the inner-most moon of the GGG and grabbed a photo before I left. 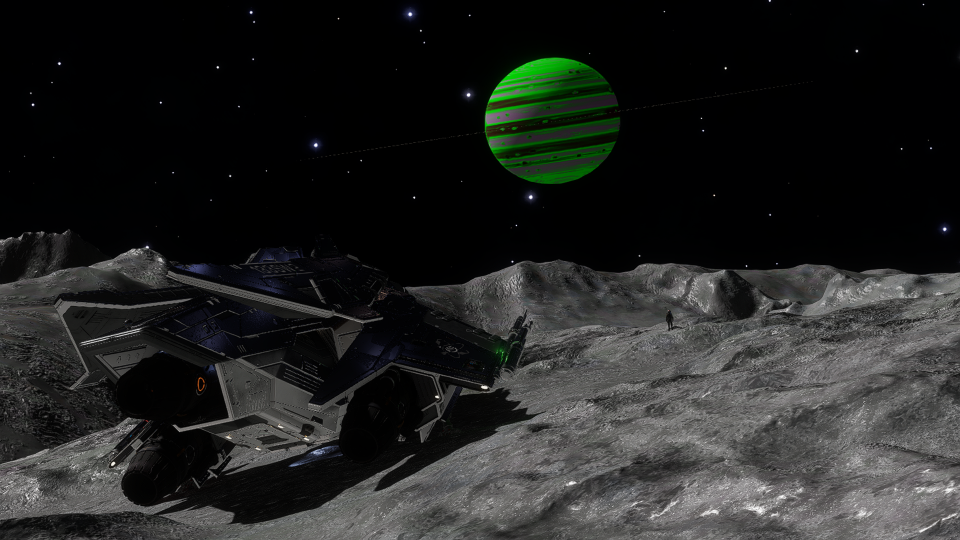 It's a long way back to the Bubble...

Last night I moved my fleet carrier to Shaulai DA-A d83 in preparation to continue the search for Kelly Eldridge's lost Green Gas Giant. That system was one of the systems Kelly Eldridge was known to have visited, and close to the area judged most likely for the GGG to be found.

In the time since I logged off last night, Cmdr Orange! found the Lost GGG - Shaulai DL-P d5-274 7! It was only 480Ly away - just one jump for my fleet carrier. 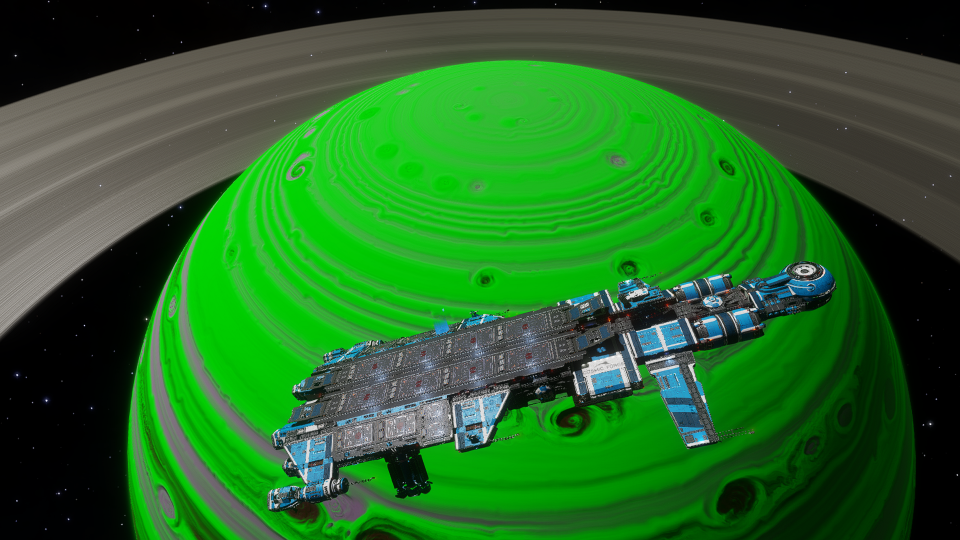 I've also realized that I had mixed up my units for my tritium reserves for the flight home - it wasn't nearly 2,000Ly, it was nearly 2,000t. That makes a big difference - it's nearly 10,000Ly of range. Although now I won't need it.

Some keen commanders have found Kelly Eldridge's blue supernova remnant gas cloud - it is almost certainly Splohoa BL-P e5-814. It's a blue planetary nebula and has been confirmed that it was First Discovered by Kelly Eldridge. It's a further 14,000Ly from the Blue Lantern!

The bottom line now is that the location of the GGG has been 'narrowed down' to a 18,000Ly stretch of the Perseus Arm.

I've now flown Cosmic Forge to the "Blue Lantern", Shaulue GA-A e20. According to my calculations I will end up with less than 2,000Ly worth of fuel by the time I get back to the bubble. This will be as far as I will take my carrier. 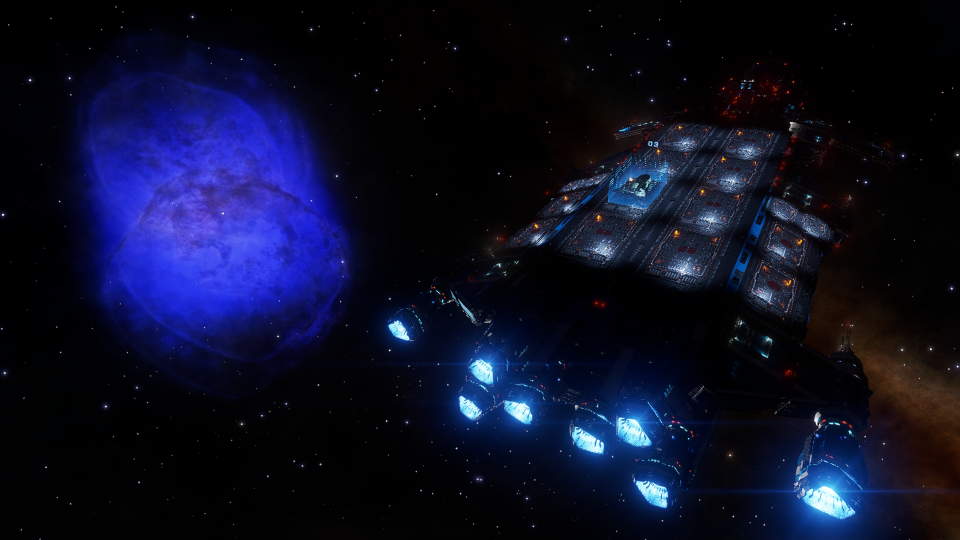 I've been reading a copy of forum postings from Kelly Eldridge that I found on the ATEG Discord:

Based on comments in her later postings, I estimated Kelly's daily travel distance to be about 6,000Ly. She found Hypnoia, the "strangest gas giant", and a blue supernova remnant on the same day - so within 6,000Ly 'north' of Hyponia. Shaulue GA-A e20 is ~4,000Ly 'north' of Hyponia, so well within the expected distance and not too far from her known visited systems.

I've managed to convince myself that the Green Gas Giant we're looking for is somewhere between Shaulue GA-A e20 and the last system Kelly is known to have visited before Hyponia: Hypo Fruia DA-A d679.

There are two other systems Kelly is known to have visited: Muenaa TD-K d8-63 and Hypo Fruia UJ-I d9-316. I'm planning to fly economical routes filtering for unvisited systems between these known points and see what I can find.

WP6 is the furthest ATEG waypoint from the Bubble.

New information has recently come to light narrowing down the location of the Green Gas Giant (GGG) sighted by Kelly Eldridge that the expedition is searching for. She saw it shortly before encountering the Hyponia Restricted Sector while heading home to the Bubble, perhaps by only a day or two.

Hyponia is another 8,000Ly beyond WP6. I really wanted to take my fleet carrier out there as it makes long distance travel much easier. After checking fuel reserves and estimating fuel required to travel to Hyponia and back, then return to the Bubble, I found I would still have about 3,500t of Tritium in the tanks.

It's also known that at the time Kelly Eldridge was out there, boosted jumps were not possible. That may help to find the "breadcrumb" trail of her travels and hence find the lost GGG. 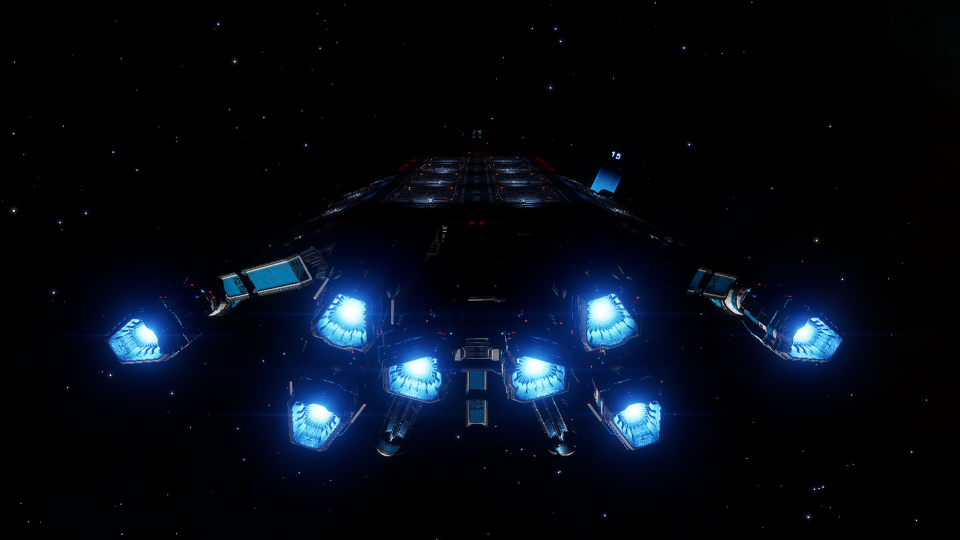 Close to WP4 for the ATEG expedition the Canonn EDMC plugin advised me that the nearby system Dehe PP-V d3-57 had an interesting trinary group of shepherd moons orbiting a gas giant. 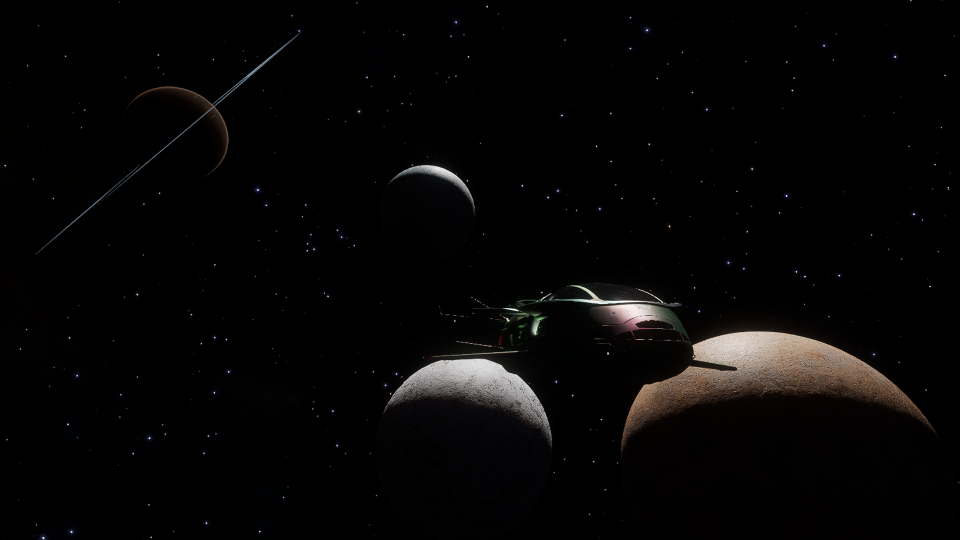 For notable systems like this one, or the expedition waypoints, I've been noting the missing system data in the plugin and surveying to fill the gaps.

Just after midnight local time I arrived at WP2, Thraikoo PS-U e2-4. The black hole is almost directly above my fleet carrier. 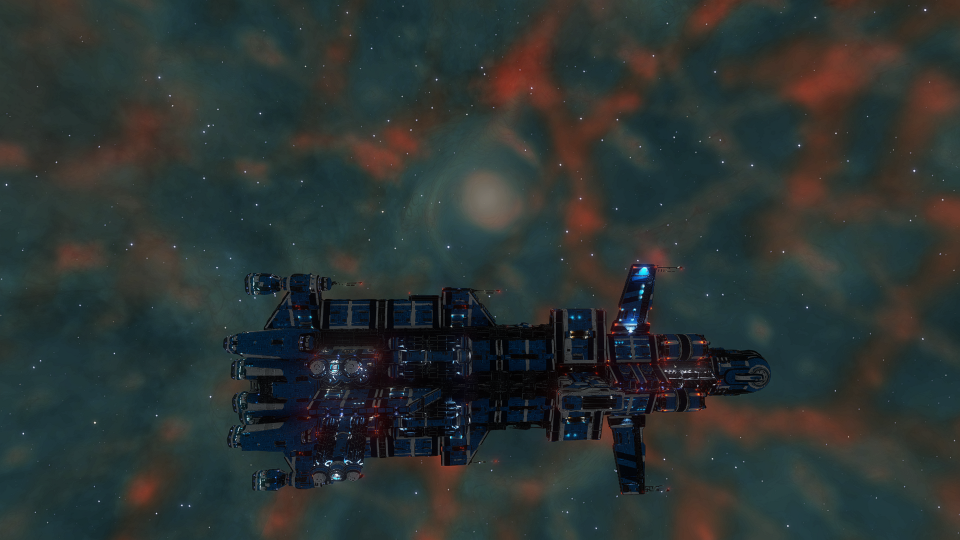 Round figures for this first leg are 20,000Ly using 5,000t of Tritium or 4Ly/t. With 18,000t left in storage I should be good for another 72,000Ly! There is roughly 53,000Ly for the rest of the expedition. I had considered flying the expedition loop the traditional way in a ship, but after running the numbers I'm comfortable that I'll by able to fly my fleet carrier for the entirety of the expedition.

My fleet carrier has made long distance travel quite the hands-off affair. In a ship you have to be jumping every minute to travel long distances. A fleet carrier jumps once every 20 minutes. With a Spansh Fleet Carrier Route saved to a document, I can copy-paste to queue the next jump then spend 20 minutes doing something that I wouldn't have been able to if I had to actively fly.

Alternatively, I'm able to fly ahead of my carrier and have it catch up to me while I explore, or the other way around - I let it jump ahead and I explore while I catch up.